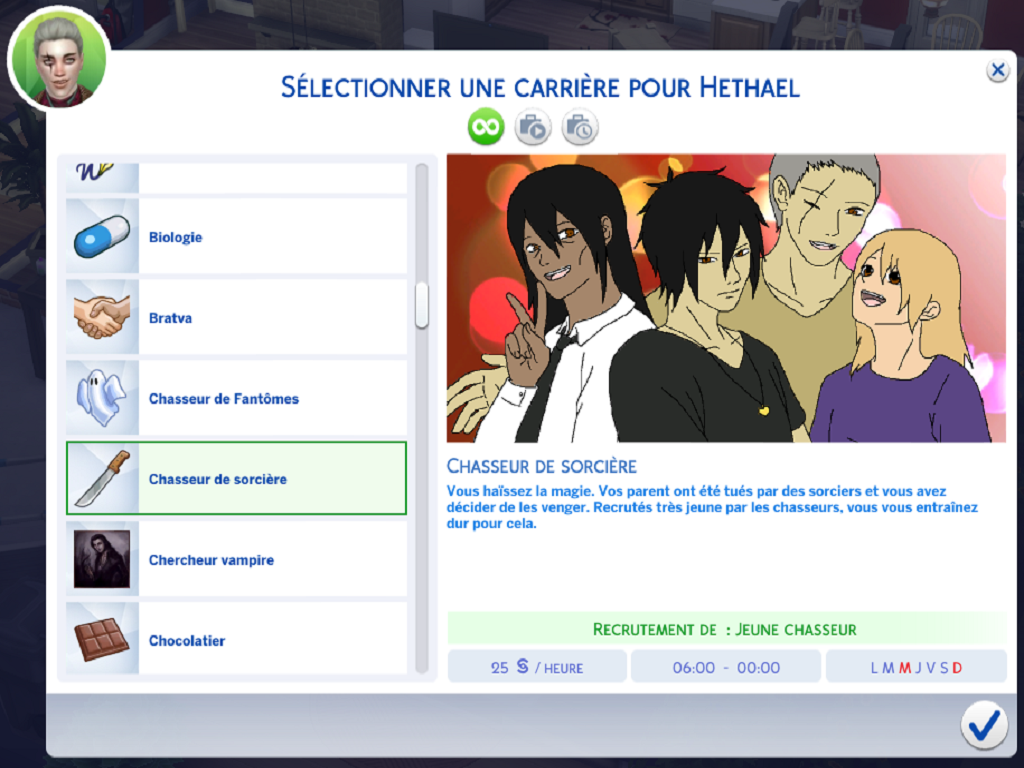 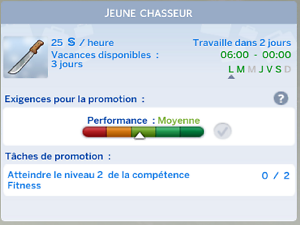 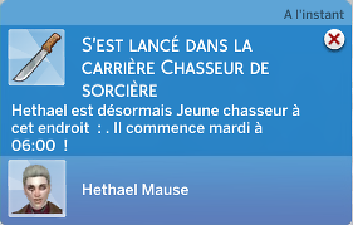 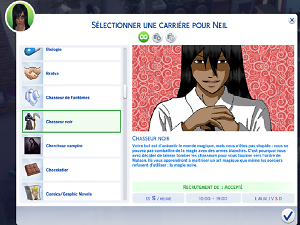 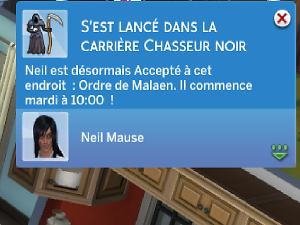 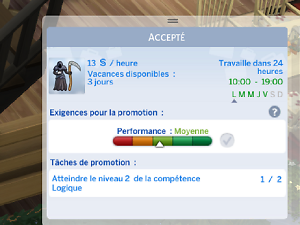 I use all the expansion pack, but they're not required.
The game pack "Vampire" is required.
Game version of the creation : 1.50.67.1020 but still work with the last update

Both are in French, but I also translate them into English (my English is not perfect

)
You can translate them in another language if you want, but ask me

The first is "witch hunter". They are stubborn and raw, but loyal to each other.

"You hate magic. Your parents have been killed by wizards and you have decided to avenge them.
Recruited very young by the hunters, you train hard for that."

Level 3 - Confirmed Hunter (MTWTFS- , 45Â§/h, 810Â§/d, Fitness 10, Vampire Lore 3)
You've been a hunter for years, and you do not count the number of wizards you kill. You have not yet met the clave directly, but their messenger has made you pass their direct orders.

Level 4 - Master Hunter (MT-TFS- , 55Â§/h, 990Â§/d, Logic 3, Vampire Lore 10)
You are a powerful and respected hunter! The clave finally welcomes you and gives you some secrets. You have for mission, to kill couples or lone parents whose children are deemed fit to become hunters if they believe that wizards are responsible for the death of their parents ... but then, what about YOUR parents?? It was a wizard who killed them, right?

Level 5 - Beta ( -TWTF-- , 65Â§/h, 1170Â§/d, Handiness 2, Logic 7, Vampire Lore 15)
That's it ! You have killed more than one hundred witches and witches! You have even been able to get rid of some chimeras and manticores! What an exploit! You are one of the most powerful hunters ever!

Level 6 - Alpha (M-W-F-- , 75Â§/h, 1350Â§/d, Logic 10, Charisma 10)
You have reached the highest rank of the witche hunters. You are smart and powerful. Unfortunately, being alpha and being part of the clave also means that you are no longer able to fight. Too old or crippled ... you still keep busy by training young hunters in strategy.


Then come the "black hunters". No, it's not racist, I reassure you o_o They are witch hunters too, but they use black magic because they feel they need to be at the same level of power as their opponents. Unlike their colleagues, they are cunning, intelligent and especially treacherous. they will not hesitate to betray their superiors and to assassinate them to rise in rank.

"Your goal is to annihilate the magical world, but you are not stupid: you can not fight magic with knives. That's why you decided to drop the hunters to turn to the order of Malaen. They will teach you to master a magical art that even wizards refuse to use: black magic."

Level 1 - Accepted (MTWTF-- ,13Â§/h, 117Â§/d, Logic 2)
Good news: you are not a wizard.
You are determined and want to annihilate these monsters, by any means. Use magic to destroy magic? Why not ? Once the magical world is wiped out, you can resume a normal life.

Level 2 - Apprentice (MTWTF-- , 15Â§/h, 150Â§/d, Logic 4, Vampire Lore 1 )
One of the black hunters noticed you and decided to take you as an apprentice! It was time ! The real training will finally begin for you. Take care, because this magic has bad repercussions on your health.

Level 3 - Black mage (MTWTF-- , 17Â§/h, 170Â§/d, Charisma 2, Logic 7, Mischief 2, Vampire lore 3)
Congratulations, you have passed the rite of passage and are seen as a real mage! Your master has thrown you directly into the clutches of a chimera and you have brilliantly survived. However, your learning is not over! Stay focused!

Level 4 - Confirmed mage (MTWTF-- , 20Â§/h, 200Â§/d, Charisma 4, Logic 10, Mischief 3, Vampire Lore 4)
You have successfully passed the test making you a confirmed mage! It surprised you, but who could have predicted that you simply had to murder your master? Did you slip poison into his cup? Or a viper in his bed?

Level 5 - Master mage ( MTWTF-- , 22Â§/h, 220Â§/d, Handiness 2, Charisma 6, Mischief 7, Vampire Lore 10)
You really master your black magic and you're a cunning ace! Now you can take an apprentice! And your goal now is to make it fail the confirmed magician. Do not get killed.

Level 6 - Guardian of the order (MTWTF-- , 24Â§/h, 240Â§/d, Charisma 10, Mischief 10, Vampire Lore 12)
That's it! Are you still alive, while your young apprentice convulse after being "inadvertently" bitten by a horned viper? Congratulations ! Now the alpha trusts you for more important missions and above all, to defend one of the hideouts of the order!

Level 7 - Scourge (-TWTFS- , 26Â§/h, 260Â§/d, Fitness 2, vampire lore 15, Writing 1)
You're close to the top, all thanks to cunning, intelligence and your perfect mastery of black magic! Sorcerers fear you and for you, a chimera is as dangerous as a kitten.

Level 8 - Archmage (MTWTFS- , 28Â§/h, 280Â§/d, Cooking 2, Fitness 3, Writing 3)
A huge congratulations to you for reaching this rank! You probably have a few dead bodies on your way, but no matter, here you have become one of the counselors and protectors of the alpha in person! You have all his confidence. Are you going to settle for this place ... or slip arsenic into his wine?

Level 9 - Alpha (MTWTF-- , 30Â§/h, 300Â§/d, Cooking 10 (because you have a risk to be poisoned if you don't cook your own food XD))
The old alpha was not smart enough to beat you. You have played with him and obtained from him a blind trust. Result, you could take his place without any resistance. At the same time, a dead man can not fight.

show me if you use my career please, I want to see your hunters