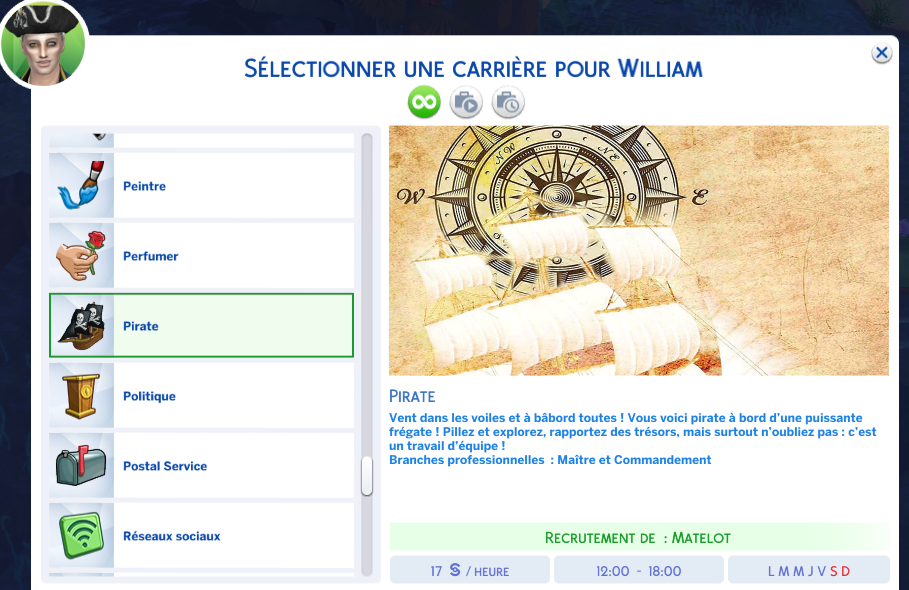 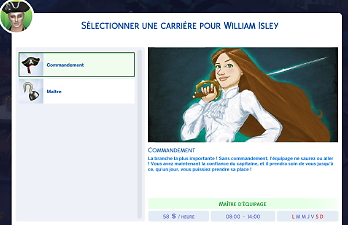 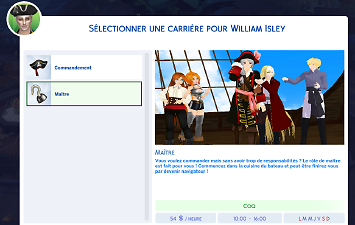 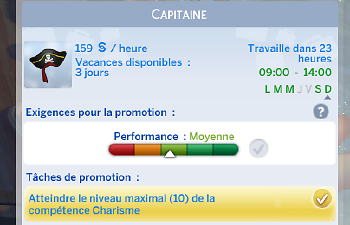 Advertisement:
110 Thanks  Thanks     38 Favourited
Again for my stories character, I needed a Pirate career. So, here, I hope you'll like it â™¥

There is no expansion required

Pirate
Wind in the sails and to port all! You are a pirate aboard a powerful frigate! Pillage and explore, bring treasures, but do not forget: it's a team effort!

Level 1 : Sailor (M T W T F - -,17Â§/h, 102Â§/d, Fitness 1)
This is the base of the hierarchy on board. You obey the orders of the boatswain and perform various tasks. You stay on the deck and maneuver the tack, plays and other instruments. You cast the anchor and put it back to the big capstan. You also participate in the refill of the pieces as part of piece servant. It is also you who are responsible for bridging the bridge, while it shines, sailor!

Level 2 : Moucheur (M T W T F - -, 21Â§/h, 126Â§/d, Fitness 3)
While your fellow comrades start to board, you adjust your musket on a member of the opposing command. Deprived of his captain, an enemy crew does not take long to surrender. Some moucheur trawlers practice pomegranate handling at their peril and that of their crew.

Level 3 : Gabier (- T W - - S S, 35Â§/h, 175Â§/d, Fitness 5)
As a Gabier, you train the elite sailors. You climb the mast to do the maneuvers that can not be done from the bridge. Under the orders of the boatswain and whatever the conditions, you are suspended more than 30 meters in the rigging and on the step of yard to relieve the sail. You dread the day when a bad injury will nail you on the bridge. You are also lookout, in turn with your fellow sailors.

Level 4 : artilleryman (- - W T - S S, 46Â§/h, 276Â§/d, Fitness 7)
You are responsible for a cannon and have 2 to 5 room crews to execute the master gunner's orders. You point the piece of artillery while the piece servant reloads. The artillery post is often filled by a former gabier. At sea, experience and intuition take precedence over technique because the weapon and the target are often in motion.

Path 1 : Master
Want to order but without having too much responsibility? The role of master is for you! Start in the kitchen of the boat and maybe end up becoming a navigator!

Level 5 : Cook (- T W T F - -, 54Â§/h, 324Â§/d, cooking 2)
You prepare the food of the crew. You often keep the spirits of the sailors in your hands. You can prepare all kinds of meals but everything depends on what you have in your reserves ... do not panic! You always have some cakes teeming with maggots to give them.

Level 6 : Cambusier (M T W T - - -, 59Â§/h, 413Â§/d, logic 2, Fitness 8)
You are now responsible for the maintenance of food, water, firewood and other supplies. You can take care of fresh, salted or dried food and make barrels for storage. You organize battues to liquidate the rats on board. You must especially inform the command during shortages.

Level 7 : Surgeon (- - W T F S S, 73Â§/h, 584Â§/d, logic 3)
You are now responsible for the care of the wounded and sick of the crew. Certainly, your equipment is rudimentary, and the only solution is often to cut the arm of a wounded person, but it is better that that to lose the life. During the walk of the ship, you look after the sailors daily in their hammock or otherwise in your cabin when the case is serious. You are trying to preserve the crew from an epidemy.

Level 8 : Calker (M T W T F - -, 123Â§/h, 738Â§/d, Fine, handiness 3)
You are in charge of the maintenance of the ship and make the reconstruction after a naval combat. Without you, the ship would fall to ruin. Be careful in your work because everyone is counting on you!

Level 9 : Master Gunner (M T W T F - -, 170Â§/h, 1020Â§/d, Fitness 10)
You are the best gunner who knows the 70 orders needed to load and score. you ensure the supply of powder guns and possibly the maintenance of braziers that heat the red balls. Your men left in a small group, each managing a piece. You transmit the gunner's orders correcting the errors. You often have to use whipping to bring discipline.

Level 10 : Navigator (M T W T F - -, 234Â§/h, 1872Â§/d, logic 6)
You are at the same time hydrographer, cartographer, geographer and meteorologist. You advise the captain for navigation. You try to predict the course deviations due to currents and weaving. You are able to assess the seabed and can locate sandbanks with your knowledge of hydrography. In the storm, you are the most important man aboard, even more than the captain, because it is up to you to anticipate the movements of the ship so as not to get carried away by the wave or the laughter. You risk lurching, putting the ship upwind or worse, causing it to dock. During calm weather, you teach the art of sailing and wheelhouse to young recruits.

Path 2 : Commandment
The most important branch! Without command, the crew will not know where to go! You now have the confidence of the captain, and he will take care of you until one day you can take his place!

Level 5 : Beammaster (- T W T F - -, 58Â§/h, 348Â§/d, Fitness 8)
You make the link between men and the command. You are responsible for implementing the orders of the second lieutenant. It is also you who motivate men, organize groups and coordinate their actions. You often have to use whipping to bring discipline. You represent the crew so look good!

Level 6 : Second Lieutenant (- T W T F - -, 98Â§/h, 588Â§/d, Fitness 10, Charisma 3, Logic 3)
You are the person in charge of artillery fire. In combat, You specify the orders of the captain to the Master-gunner. You anticipate the movements of the ship and the shooting conditions. Outside of the fighting, you also conduct the exercises to train the gunners.

Level 7 : First Lieutenant (M T W - - S S, 149Â§/h, 745Â§/d, Charisma 6, Logic 6)
You are responsible for the smooth running of the ship. You detail the evasive orders of the captain by grasping their purpose. You must also take initiatives such as sharing important facts. Your position is decisive for the conduct of the ship and the men. You represent the political and judicial powers. You also take care of recruiting, in ports or on a catch vessel, which allows you to know your crewmen.

Level 8 : Captain (M T W - - S S, 149Â§/h, 745Â§/d, Charisma 10)
You are the soul of the ship, you are responsible for the strategy and success of the boat's mission. You have the right to life and death on the crew but beware, you can be abandoned on an island deserted by your men, according to the party hunting if you show incompetence. You have been chosen because of your charisma and because you are the most ferocious of men and the best of sailors.