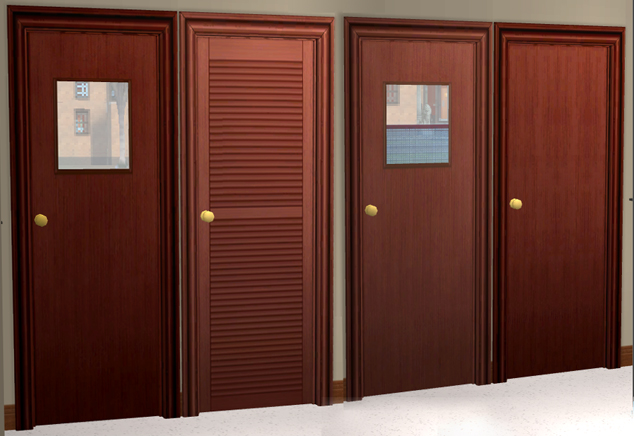 734 Thanks  Thanks     33 Favourited
This is a new mesh, and means that it's a brand new self contained object that usually does not require a specific Expansion pack (although this is possible depending on the type). It may have Recolours hosted on MTS - check below the description for more information.

Better late than never! I found and fixed a small issue with the wall masks which is only visible when shadows are turned off. Redownload and replace if you like, GUID's remain the same.

Has anyone noticed that there are no plain, simple, unadorned doors in the game that have a doorknob instead of a bar handle? I made these to match the doors in my own home.

I have also included repository-linked versions of my matching decorative dummy doors and some extra recolors. (See that thread for details on dummy door features.) If you have those doors and would like to use these instead, delete the old ones and all recolors. The GUID's are the same, so the dummies will remain in any houses where you've already placed them, but the colors may need to be reset. Apologies for any inconvenience.

Both the real and the fake doors include diagonal versions and appear to work with Nightlife and later expansions. Please report any problems you may encounter.

Additional Credits:
Thanks to MaryLou for her helpful enhanced templates for windows: http://www.modthesims2.com/showthread.php?t=228518