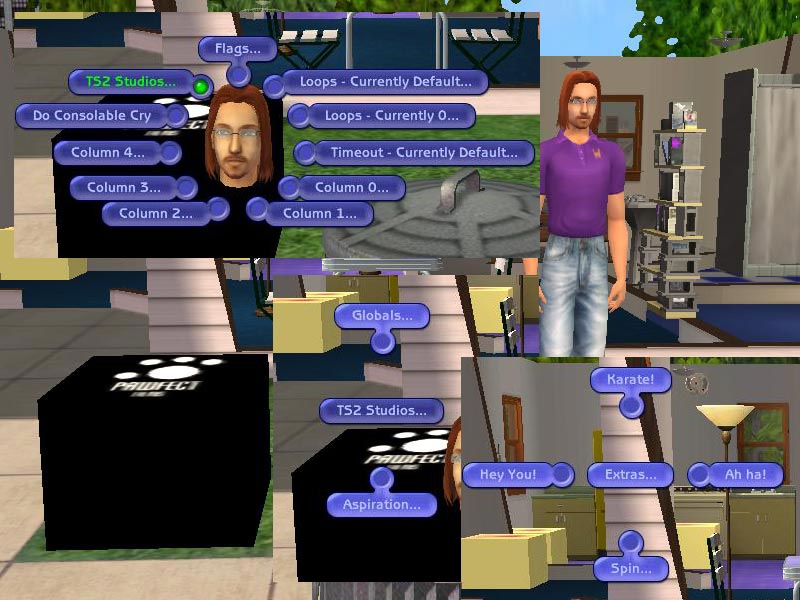 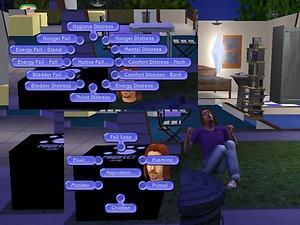 Picked Upload! This is a picked upload! It showcases some of the best talent and creativity available on MTS and in the community.
WARNING: DELETE THE OLD FILE BEFORE INSTALLING THE NEW FILE.

(I've been slowly but surely working on this - must've forgotten about this site. Fun fact: I've yet to actually use this myself for movies, as I've never made a Sims movie yet!)

DESCRIPTION - From the creator of the GTA Studios Series for Machinima filmmakers comes TS2 Studios for the Sims2. Based on Paul's Reaction Tester (which eXperion cloned for use without cheats), this version not only removes the annoying "Interaction/Animate/Overlay" dialog, but adds NEW interactions useful for filming.

NOTE: This now has it's own GUID, so it DOES work fine with Paul's Reaction Tester (doesn't replace it). Also, I have OFB, and it works fine with that as well. I DON'T use any other hacks though, so use at your own risk. You have been warned.

LOCATION/PRICE - You can find the "Studios" box in "Hobbies/Creative" It's a black box with the Pawfect Films logo on it. Cost: 0 simoleans.

TO USE - Put the box somewhere on your lot, select a sim, click on the box. You will find the Maxis created reactions inside Paul's Reaction Tester. (As of 0.2 BETA, the flag/timout/loop controls have been removed). To access the TS2 Studios reactions, click on the "TS2 Studios" button on the object.

Just click on the interaction and watch your sim go. Since the "Interaction/Animate/Overlay" dialog was removed from the code, you can now string several interactions together in the Action Queue. I will string together some elements in the programming for ease of filming, but I want to leave most of it open-ended, so filmmakers can come up with their own combinations.

There will be a LOT of pie tree functions as this grows, but for now you have about, oh hell, A TON OF NEW interactions to choose from. Note that while teen/young adult/adult/elders can use most of these, the kids and toddlers can not. I may or may not add future sections for these groups.

Using any of these reactions/animations will NOT help or harm your sim in any way. No motives or aspirations will change at all. They are simply animations to use for filming or storytelling, without having to resort to using cheats. I MAY add motive/personality adjusters later on, but this is a very low priority. Besides, I'm sure most of us have good hacks for that sort of thing anyway. :p

WARNING: Myself (CJ), Pawfect Films or any of our cast/crew are NOT responsible for what you do with this. We are also NOT responsible for anything that happens while you use this. I will make every attempt to make this bug-free, but things happen, you know?

Greets/Thanks:
quaxi - Author of the fantabulous SimPE package editor.
eXperion - for cloning the original for me to study.

HomeSlice from SimSlice - I "peeked" at one of his custom objects, just to see how it worked. However ALL of my additions are coded from the game files themselves, NOT any other hacked object.
The cast and crew at Pawfect Films.
FBI and the rest at GTAForums.
Hugh and the guys at Machinima.com.
Spy and dizzy7 (I think) for the outstanding DisaSim2 BHAV reader.
Special shout out to Michelle and Kheri at the babe-a-licious Britiannica Dreams site.

Anyone else I forgot.