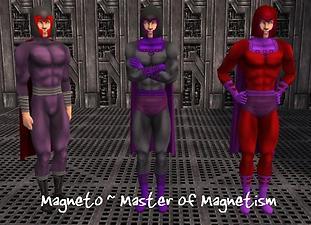 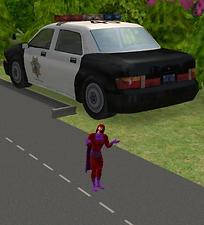 Created by SynapticSim View Policy / About Me View Downloads Home

(NOTE: Please download the meshes at the links below before trying to install these sims.)

Okay, first of all, major MAJOR major props to GeneralZoi, 'cause without her, I would have never made a true Magneto. Yes, I made one with a costume designed by me, but even then, it was only a pale comparison. Now, we can have the true Master of Magnetism wreaking havok all over the Sims Neighborhoods.

Erik Lensherr had a troubled upbringing, being raised in a Nazi Death Camp. The evil he experienced at the hands of Baseline Humans fueled his desire to rule over Humans. This dream became a possibility when at puberty, his mutant gene grew active, giving him control over the magnetic fields. Another attack by the humans caused the death of his daughter. This was the final attack that Erik, now Magnus, would accept. Born then was, Magneto, The Master of Magnetism. He has unleashed untold terror upon humans and mutants alike since then. By doing this, he has become the X-Men's Greatest Foe.

In this download, you will find three versions of Magneto:

Without the following wonderful people, these characters would not be possible: :grouphug:

Meshes (You MUST have these for the skins to show up in your game!)

For the awesome cape worn by all, get GeneralZoi's Superhero Cape mesh here: http://www.modthesims2.com/showthread.php?t=100844

Textures, Skin Tones, Eyes: (Download from these links NOT required)

Most of the eyes are based off of Soulsilver's Eyes, found here: http://www.modthesims2.com/showthread.php?t=30817

Everything else (Make-up, hair, facial hair, masks, skin tone re-colors, etc) is by either Maxis, or Me. :D

Note: There's also a mask by me that appears as clouded over eyes, much like Storm's when her powers are active.

Thanx everyone, and please enjoy!

If you include/use my meshes with your uploads, please add a link to my site SynapticSim's Lair:

I also love to see what people do with my stuff so if you can't contact me by PM on my site then you can send an email to [email protected], just be sure to note that it is sims related in the subject ... I'm paranoid about emails from people I don't know, lol.

Please do not upload anything I make to the Sims Exchange.

This policy goes into effect immediately. No parts of my (SynapticSimâ€™s) creations can be used to create Custom Content for The Sims 3 or The Sims 4. This includes the templates that I have released as well as any of my other creations dating all the way back to The Sims 2 Exchange up until my most recent creations and any future creations. I donâ€™t even know if itâ€™s possible to use Sims 2 custom textures with Sims 3 or 4 custom content, but if it is, please DO NOT use any part of my creations for public use and/or downloading. This includes costumes, skintones, hair, eyes, makeup, face masks, meshes, accessories, objects, mods, hacks, and anything else made by me for use with or in The Sims 2. Please respect my wishes where this subject is concerned. Should I discover my content being used in ANY part on The Sims 3 or Sims 4 creations uploaded to another site for people to download, the admin of that site will be contacted and asked for the content to be removed. Should you also be a member of SynapticSimâ€™s Lair, then you will be permanently IP banned without warning.