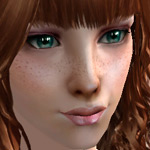 19,209 Downloads Quick download 4,899 Thanks  Thanks 242 Favourited 438,627 Views
Featured Upload!   This is a featured upload! It showcases the best talent and creativity available on MTS and in the community.

Created by Enayla View Policy / About Me View Downloads Home

Hi there! In anticipation of the default set I will release soon, I'm letting you have a couple more, unrelated skins. I made two recently – one that works very well with Asian Sims, and one that works with more Nordic ones. These two skins are not defaults.

As I always get questions where I found the hairstyles, I've written the info on the pictures... I hope that helps. These are available for ALL ages, and have different textures for different body tones – they have nipples but no genitals (the lower blurred box isn't hiding any goods).

Here are the two skins, and what they include.

The opaline skin has eyeshadow, eye colour, eyebrows and freckles included on top of the regular skin. I wanted the freckles to be removable this time – if you're not into them, you've got a fresh, pale skin with a pinker undertone than my previous ones.

There was an unfortunate story regarding the female model in these pictures. Right when I was starting the photoshoot, she whined and revealed that she was pregnant – which is why she is sporting a belly in the pictures. Please see the Golden Grace skin for what a 'normal' toned stomach would look like.

The golden grace skin is the first of several Asian skins that I have planned. You'll get some of darker tones later on, but this one is very pearly. Personally, it's my favourite right now as it has a very soft and sweet glow to it ingame. Only the eyes are included except for the skin itself.

I hope you enjoy them :] I've clicked that you need both expansions - because some people seem to. It might work without any of them though, but I won't promise anything. Good luck, have fun and I hope you like them!

Archive Information
This is a Maxis Recolour which means that it is a recolour of an item that already exists in your game. Please check the Expansion pack requirements to see which game pack it recolours.
Archive: opaline.zip
File: 72f82f94_OpalescentEyes.package Eyes Included Custom Content
File: 5357b2b4_OpalBrows.package Makeup Included Custom Content

I've long since lost track of all the defaults that have been made using my pixie skins – and I'd love if the creators of them could send me the links, so I can link you up from here… I keep getting requests about where the items can be found and I can't quite remember, hehe.

Anyway; my name is Linda, and I'm a digital artist by trade. Sims 2 is my biggest hobby right now, next to mask-making, and I spend a bit too much time for my own good, making new skins.

I've made up a little list with my 'terms of use' as I keep getting asked these questions. If you have any inquiries, please read it before contacting me.


Thank you; have fun with the skins :D