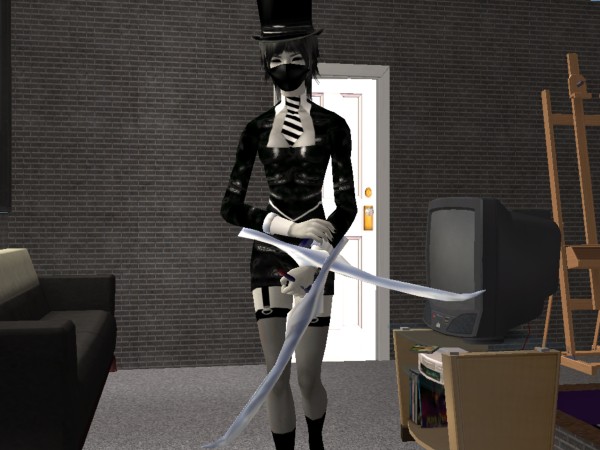 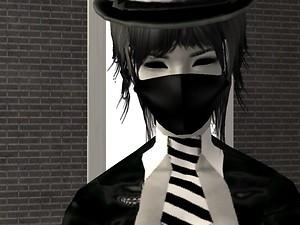 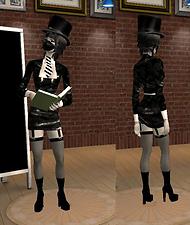 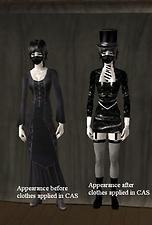 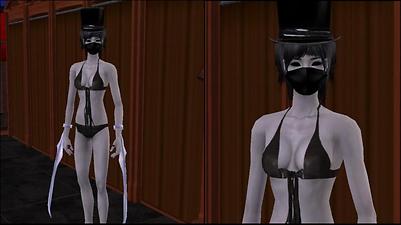 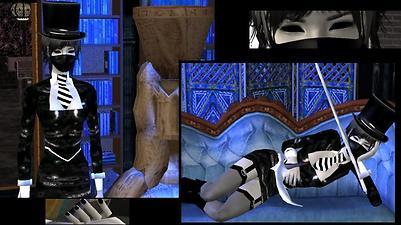 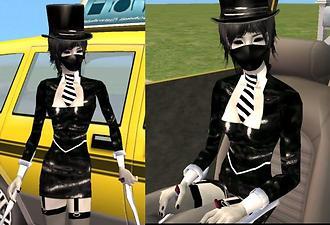 UPDATE 1/31/09:
It's been quite awhile since I submitted this sim, but I stumbled on her again while transferring files from one computer to another. I fell in love with her all over again-- even gave her a name this time, "Sally Bowles" after the Cabaret character-- and gave her a little redesign. The problem with the previous design is that she doesn't look so great when her mask comes off; with this one, she looks to be one of my favorite sims. I'm still leaving all the old info and design here, but in case you're interested in my re-working of Sally, here's what you'll have to do:
-Change hairstyle to "Simple Elegance" black, available at http://www.digitalperversion.net/
-Add on "Chiqui's Lashes" eyeliner, by Bruno here at Modthesims2. They come on this sim
-"Dramatic Bleeding Eyes" makeup by sunken-woglinde (me)
-Eyebrows #03 Black by Kamikitten, or similar thinner eyebrows
-Remove the "Taki Bangs" face mask.
-If this is the first time you've downloaded her, follow the rest of the old download instructions below

I would have just re-uploaded Sally but seeing as her Face Sculpt has not changed there wasn't any point. Sally's story is new now, too; her siblings are out of the picture even though she's still the daughter of a vampire(this time though, either she herself is a zombie or one of her parents was...you can choose XD). She's a roomate with a total remake of another of my old sims, Lomelinde, who should hopefully be up for download soon.

End of update-- I hope you enjoy this sim!

4/1/06
Hello everyone! This is surprisingly not that new of a Sim...it's a re-make of Rosalind and Caludias's sister, whom I titled "Death Lolita"(the original was an older sim, and I could not come up with a proper name; which even today I cannot). I made this awhile ago, but didn't want to submit her because I realised almost all of the things used in this sim are by liegenschonheit; and then it hit me- why not make it a tribute to her? Her gothic clothing covers a large majority of my human-ish Sims, after all, so what the hey. ^^

Anyway, I'm very pleased with how this lovely lady came out. She looks good without her mask; I even believe she looks Japanese, to be honest. Her past is that her mother was a succubus and her father was a vampire; she ended up getting stuck babysitting her two other siblings(each from different mothers) as a wish from her father on his death bed, as she was the eldest and most responsible, so even to this day she's stuck with her other two significantly less intelligent than her siblings.

Comes packaged in Original Maxis Clothing; Cassandra's outfit. You must manually change her clothes in CAS. Her Top Hat will appear under glasses, and her clothes under one-piece clothing.

In the photoshoot, she is holding BloodRayne swords, which you can get at http://www.rosesims2.net in the Magic section.
Also, The swimsuit used in the photoshoot is NOT INCLUDED. If you want the swimsuit(which is by Barcelonista), download it here: http://www.modthesims2.com/showthread.php?t=121309