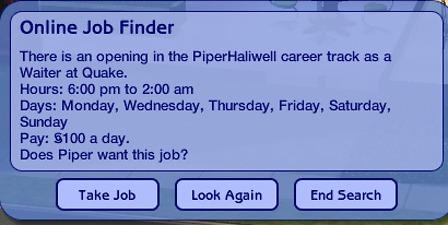 330 Thanks  Thanks     18 Favourited
This career does not over write any maxis or anyone else’s for that matter. I extensively tested for that.
No expansions required so whatever version of the game you’ve got you’ll be fine.

Here is my Piper Haliwell career based off the TV show Charmed. The levels are based off her jobs in the show. I made it so that it wasn’t gender specific so a man in your game can get this career. The only odd thing about it for a male would be the icon. I made a custom icon for this and it’s a picture of Holly Marie Combs who played Piper on the show.
Even if not interested in the show it might be a good career for a sim who is wanting to own several businesses in it’s life as that is how I’m playing it in my game.
It has three chance cards at the moment I’m hoping to update it when I think of more. If you have any suggestions I’m certainly open to them! Chance cards are not my strong point but the few I do have are well written.

I have decided not to do an elder version as I remember from the end of Charmed that as Piper got older she stayed home to help raise the children.
Also as someone pointed out to me:
Originally Posted by sonofsadako
hey i thought i would point out that Piper didn't retire to raise her kids, she quote "got that restaurant she always dreamed of"
just thought I would point that out since I just saw forever charmed a few weeks ago.
Here is my reply (Thanks again for pointing it out):
You are right and I thought about that, but then remembered that in game after adulthood you go to elder and I figured since in the show she did that restaurant first then as she turned older retired. So I figured once she aged up in game there would be no more job for her and she could "retire" to help with grandkids. But I'll be sure to add in a note in my post so others know that too. Thank you!
Chami

Here are some screen shots of it:

The carpool and my custom icon

A shot of the sim’s info with the job listed.

Anyway, if you take it I hope you enjoy it. Please report anything wrong or ideas in this thread. Thanks!

I've had several people ask me if I'm going to be doing the other Charmed girls careers and I AM! Yay! I'll post them all as soon as I get them finished.

Also the Piper Sim you see pictured in my screen shots you can find here:
http://modthesims2.com/showthread.php?t=98774
She has Phoebe and Paige there as well!

Additional Credits:
Thanks go to the many tutorials on MTS2 and several people at MATY for helping me figure out the finer points of SimPE.
Thanks to the makers of SimPE and Bidou for the career editor.