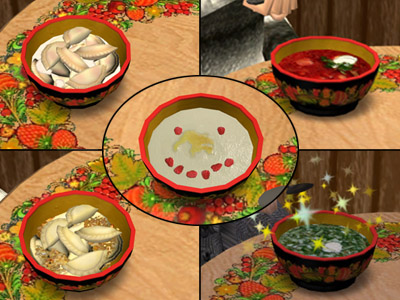 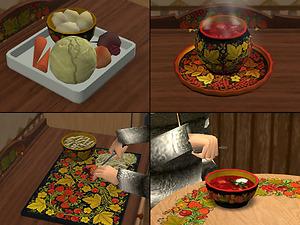 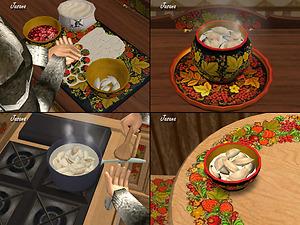 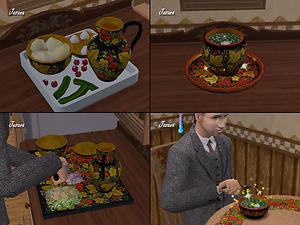 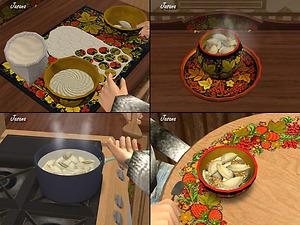 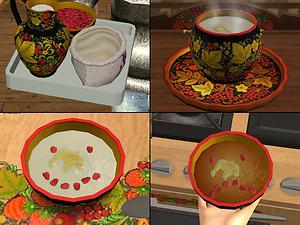 78,571 Downloads Quick download 3,344 Thanks  Thanks 208 Favourited 236,925 Views
Featured Upload!   This is a featured upload! It showcases the best talent and creativity available on MTS and in the community.

Created by Jasana_BugBreeder View Policy / About Me View Downloads Home

Do your sims want something to eat? If yes, here are 5 meals from Russian Food pack I'm working on now. The pack includes meals that are either traditional for Russian menu, or use traditional ingredients, or just I'm used to them

Common notes.
1. All meals use custom bowls - attached in OBJ_bowlshohlomaJasana.rar - so make sure you downloaded and placed both serving and single bowls to your Downloads folder (or any subfolder) if you are downloading any meal.
2. All meals are created in Base Game and are compatible with any addons.
Due to Base Game compatibility, they don't have Call To Meal interaction.
If you have Seasons addon installed, these meals have additional behavior:
- if there's fresh food in your fridge, these meals turn 'magic' like other meals
- some meals - currently only borshch and okroshka - affect Sim temperature when eaten
3. Meal menus are currently available in English, German and Russian. If someone wants proper menus for other languages - please help me to translate meal names to your language.

Preparation and cook stages may differ from real life somewhat, but I tried to make them as close as possible

Borshch is a 'first dish' - a kind of soup, and every cook puts differnt ingredients into it

Common to all are beet-root and cabbage.
Sims will chop the ingredients, then boil them.
Cooking skill 3 is required.
Borshch can be eaten for Lunch and Dinner.
Only with Seasons addon, only withing 2 hours after cooking, eating borshch heats up sim a bit.

Okroshka, or 'summer soup', is also a soup, but it isn't boiled - ingredients are chopped, then kvas (bread-based drink) is added. (Well, potatoes and eggs are boiled before chopping, but I can't make such sequence in Sims2). Since okroshka isn't boiled, sims cannot burn it

Cooking skill 1 is required.
Okroshka can be eaten anytime - for Breakfast, Lunch and Dinner.
Only with Seasons addon, only withing 2 hours after cooking, eating okroshka cools down sim a bit.

Semolina was traditional breakfast when we were kids, and I guess most kids hated it. To be more likeable by sims, this semolina has a smiley - note that it doen't smile happily when it's burned

Cooking skill 1 is required.
Semolina can be eaten for Breakfast only.

Dumplings - well, it's not the best translation of word 'vareniki', but I can't found another - are another traditional meal, cooked similarly to ravioli: you get some stuffing (can be almost anything) wrap it with dough, and boil.
Sims can now eat 2 kinds of dumpings - cherry (served with sour cream) and
and potato (served with chopped&fried onions).
Preparation part is the same as for Maxis hamburgers - the closest available.
Cooking part is improved by me to be more realistic:
- when placed to pot, water is transparent and dumplings lay on pot's bottom
- when cooked, water becomes whiter and less transparent, and dumplings float up
- when burned, no water is left, and dumplings lay on bottom, all burned
Cooking skill 4 is required.
Dumplings can be eaten for Lunch and Dinner.

That's all for now. If you are interested, wait until I make more

Technical details.
Foods, as usual, are animated by changing graphic; therefore, I'll give poly counts only for one of states, where they are highest (usually preparation state).
- bowl single - 352 faces, 272 vertices
- bowl serving - 700 faces, 531 vertices
- borshch - 1028 faces, 778 vertices
- okroshka - 2246 faces, 1607 vertices
- semolina - 866 faces, 606 vertices
- dumplings - 1226 faces, 852 vertices
Borshch, okroshka and dumplings were cloned from Chili Con Carne, Semolina - from Mac'n'Cheese. However, a lot of changes were done after cloning (including importing states from other meals) so this info isn't really useful

To make borshch and okroshka affect temperature, I added the code into CT - Dec tree (imported from semiglobal), which now checks whether it's a single meal, whether Seasons installed, whether meal age is less then 2 hours, and then simply adds/substracts temperature. Therefore temperature changes by steps, not smoothly, but this seems to be the only choice where I wouldn't need to import non-tree semiglobals (therefore, wouldn't need to create different versions of food for each addon).

Thanks.
To skankyboy, for the smd plugin.
To Peter Jones, for PJSE plugins.
To HystericalParoxysm, for helping me to find the cooling/heating code.
To Akulina, for the screenshots.

Policy.
Meals aren't recolorable - you have to clone them even if you want to just change texture. Ask for permission if you want to clone a meal. I'm likely to give permission if result is going to be free :D
Please don't redistribute these meals, as well as other my objects - give link to the thread where you got them instead.

General rule - if it's not for free, then it's not allowed.
Feel free to recolor my objects/clothing meshes, but don't post them as donation or pay items, and don't forget to credit me properly.
Ask for permission if you want to clone my object/mesh. I'm likely to give permission if result is going to be free.
You may use my creations in your sims/houses, and include them to upload, if they are posted as free items. Please give link to the thread where you got them - for bugreporting and updates.
Please don't upload my stuff to Exchange.