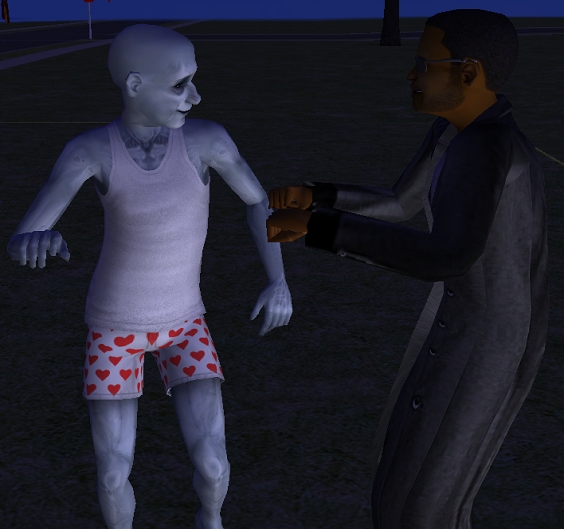 438 Thanks  Thanks     28 Favourited
Zombie, zombi n (pl zombies) a person who is lifeless and apathetic; an automaton (New English Dictionary and Thesaurus.)

Zombies- they wander aimlessly, made crazy by the smell of the living. They are driven by hunger, bent on devouring human flesh with no regard for the consequences of their actions. They take more damage than normal humans, they are found in every dark corner, and they... they... what on Earth...

No, of course they don't dance! This is just Edward Edwardson, a tame zombie who likes to get down and boogie every now and then. If only that could be said for all zombies...

Well, it's been at least 6 months since I last posted something up on MTS2. Partly due to school, but mostly because I've been very... very.. lazy.

This project got kick started in January, continued through February, and forgotten about during March and most of April. It was resurrected (pardon the pun), and I made it come to life again (sorry again...)

Living through the zombie apocalypse is a fascinating (but very scary) experience. You'll have bad times, and you'll have even worse times. Good times are out on holiday I'm afraid.

The uniforms are provided very kindly from SixStringSlim and Aner-Dyfan, and I think suit the last three job levels to a tea. Oh get out of the way Edward!

For most of the others levels, SWAT gear will be your regular gear- perfect for protecting against zombie claws

The reward, which appears at level 8, is made by UK1967. The object and texture remains the same, but its description is very much different. And yes, Edward is a normal sized zombie and the gun really is that big-

The full description of the original object can be found here.

Other details
*Unique GUIDs for everything, so no overwriting
*Everything will work with or without Expansion packs installed
*Full chance cards as always
*Top pay is around $2000
*Maximum reward bonus is only $1200- don't play this career if you want to get rich!!!
*Language enabled, so English will appear in all versions of the game
*Includes a new icon (my own, so it's a bit basic)

*Warning! At level 8 there is a 1 in 4 chance the chance card will get fired!
*The level 4 chance card provides a lot of useful information- select Yes.
(Selecting No also provides some useful info- read it if you have some spare time

And with that, I finish by saying... oh, hold on one minute, someone's knocking on my door... he looks dead on his feet...