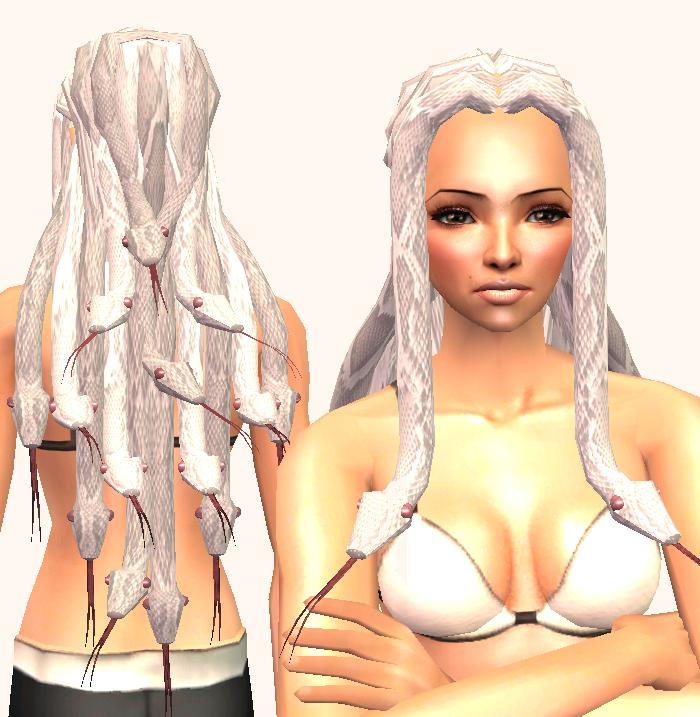 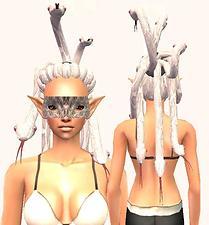 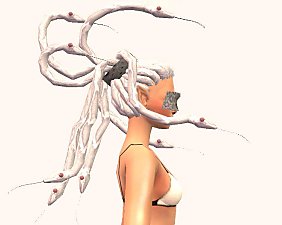 Created by sunken-woglinde View Policy / About Me View Downloads Home

Hello Everyone!
Well, the other day, I saw WickedSims's AMAZING Gorgon hair meshes...and I instantly fell head over heels for them! So, I went and got the snakeskin texture I used for my Snake Mermaid retexture series and whipped up these two recolors to match.

In-game, while doing the photoshoot, I found WickedSims's great animation combined with this texture to be so realistic that it was unnerving...but in a good way! I'm highly pleased with these recolors; and I plan to do some more with different snake textures.
Before you ask, yes, I'm going to retexture WickedSims's other Gorgon meshes, including the snake bodies once she releases them. (I can hardly wait!)

This, obviously, is the Albino version. I haven't actually seen an Albino Python before(I have, however, seen an Albino cornsnake) so I can't say if this is accurate; however, I just felt like making a white version, so here it is. Still, I think I like the Original Version a little more.

You'll need WickedSims's "Gorgon Hair" and "Gorgon Hair #2 - Ponytail" meshes, which are linked to at the bottom of this post. 'Albino' versions of these retextures are soon to come.

Also, the snakeskin texture appears on all ages; though from toddler to teen it appears on Maxis meshes. I just applied the snakeskin to the meshes without really trying to fit them to the texture; on some of the hairs it looks cool, but on others it looks odd. Still, I thought it would add variety so that you wouldn't just have more black teen/child/toddler hair binned away.

As with Wicked_Sims's recolors, the gorgon hairs themselves appear from Young Adult to Elder, with no color differences. =D


Additional Credits:
Additional Credits:
The credit for the snakeskin texture goes to Brendabond, who was kind enough to let me use it in my uploads. =D Please click HERE to view her amazing snake Mermaid recolor and give her thanks for her hard work. =D