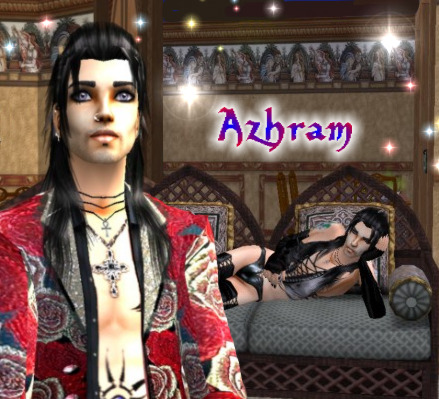 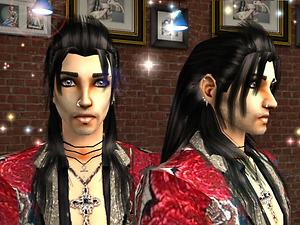 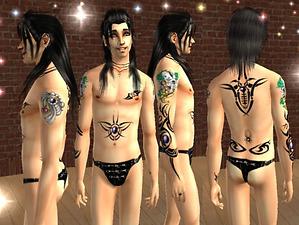 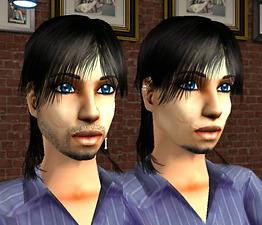 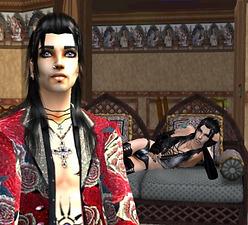 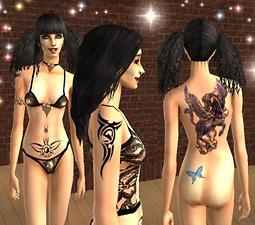 Ya, maybe with the name of this blackhaired goody I want to share with u tonite...

"Azhram", a creation of the British fantasy-author Tanith Lee, is one of the five Lords who ruled the "Flat Earth" thousands of years ago.
Also called "Lord of Night" his kingdom lies far below the surface. His subjects, the "Eshva", are beautiful elvenlike males and females, who are able to seduce humans just by a climpse of their marvellous eyes. They like to play with their "victims", giving them love bejond pleasure, leaving them brokenhearted.

So the legend is told...

The man with the scar, my Azhram, is a modern version of this Dark Lord.
Zodiac signed sagittarius he is the perfekt bon vivant, broad-minded in any kind of his appearance. A romance sim indulging in flirt with both genders, loving to love, enjoying pleasure to the full.
Leaving his leash loose he will bring amorous confusion, jealousy and hearts on fire (and your trashcans will always be kicked

), but I'm quite sure the socialite never missed on any party can be tamed by the right soft hand...

And here he is: Azh!

His tattooed skin made by me (one long rainy night in the Viennese "Dark Dreams Studios") is included, but if you won't download Azh, you can use the skin on every sim you like! The skintone is based on a maxi one, bleached and recolored, and a female version does exist, too, both genders from child to elder, both with pierced nipples but no genitals.

This Lady is the female version of Azhram, so if you want her, just click the fem-sign on step one in the CAS-mod and call her "Eshva" or whatever you please.
The female face has no scars, and I'm totally sorry, I can't remember where I got her hair! (Her underwear is made by me, too.)

Not included, but Azh nearly dies without, are his long black fingernails done by "Shadylady482": http://www.modthesims2.com/showthread.php?t=190393

Azh appears in: "The Bon Vivant"-everyday/formal and "The Callboy"-underwear, both done by me. His blush is mine, too.

As the Dark Lord would say: enjoy playing (with) me for a while!

If I have forgotten somebody, please don't curse me! Just pm me and I will add u immediately!
Files Need help with downloading or installing content? Click here!

This download requires one or more meshes to work properly. Please check the Description tab for information about the meshes needed, then download them below:
Also Thanked - Users who thanked this download also thanked:
Zombie Jill - Moon Eye
by ZombieJill
Salus - A New Boy by Zombie Jill
by ZombieJill
Final Fantasy VII AC final
by Navetsea
Justin (The Surfer)
by @Stefan
Draven- gorgeous vampire.
by sakura_chan
Byron A Lusty Gothic Vampire Male & NEW Hair Mesh
by HIM666
As'ler, an adult-male custom sim by Zombie Jill
by ZombieJill
LEON *by jameLia*
by jameLia
SimCribbling~ Dark Elf Lusam
by Ren
Savana
by agustin
Packs Needed
None, this is Sims 2 base game compatible!
Back to top

There's somethin' about the way u look tonite...

http://members.chello.at/m.c.kreindl/AscBanner1h.jpg
Policies: If you ever want to use my creations in non-payed public (like here on MTS2), feel free to do so, but...
please, never forget to give me some credits, send me much love, hugs and - if possible - pics! (I'm a curious guy!).
If you want to use my stuff/sims on any donation- or pay-site, pm me first: there are some rules! :)