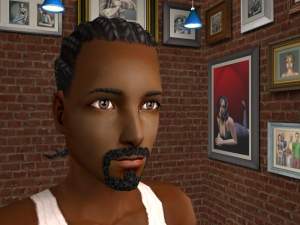 Created by Cidira
View all Downloads
Uploaded: 10th Aug 2007 at 4:35 AM
What's an "afro" beard? In this case, it's a beard made using the texture from the Maxis afro, because I realized that I had no beards that matched with that hair type. I used three different Maxis alphas, didn't edit them at all, and only just barely edited the texture for one of the beards (which might have been the fourth one I made and then deleted because; the mesh it was on lightened the textures too much and it didn't match the hair anymore).

I highly encourage anyone who can produce a more realistic texture to make their own versions and share; I went ahead and made these because I wanted them, I'd not seen anything like them, and the Maxis texture was there to be worked with.

DON'T claim my work is yours (that includes uploading it with Sims and not giving credit), or charge people money for it.

DO enjoy it in your game, and let me know if anything is wonky.