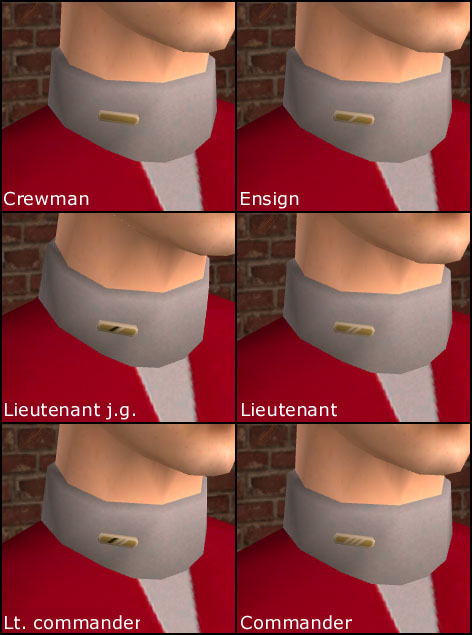 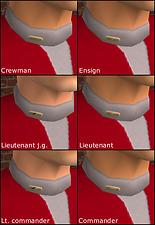 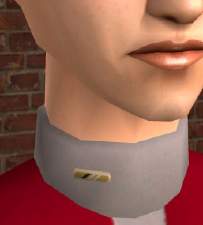 While your Starfleet Sims have had rank insignia for quite some time now, your poor Maquis Sims have had to go without (like the Federation signing bonehead treaties with Cardassia wasn't enough). It's time to rectify that, don't you think? So, without further ado, I give you: Starfleet provisional rank insignia.

These are for adults (and young adults if you have University) and elders, and they will appear together with casual and formal wear, as well as with outerwear if you have Seasons. They can also be worn together with other accessories.

Additional Credits:
- Tiggerypum, HystericalParoxysm and Dr Pixel, whose excellent tutorials have taught me everything I know about meshing for TS2 in general and accessory meshing in particular
- Wes H for the Unimesh plugins
- Quaxi and all the other SimPE developers
- The Milkshape team

I haven't made any insignia for captain. There are two reasons for this. First, in my opinion, if you're going to be captain, then you really should get with the programme. Second, when Chakotay becomes captain of Voyager in "Before and After", he wears the regular four-pip captain's insignia instead of its Maquis equivalent. To me, this indicates that there aren't any provisional insignia for captain - but if you disagree and want to make captain's insignia of your own, you can of course do so.

Don't forget, if you like my work, hitting the "thanks" button is a quick and painless way of showing it.