LOTS of Eyes in Many Colours & Styles. 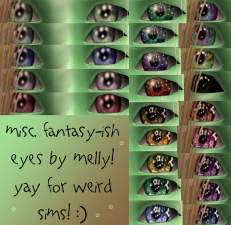 61 Thanks  Thanks     4 Favourited
So, I'm uploading a lot, 'specially for a first upload. Sorry. : P Separating these eyes seems wrong to me. They're a lot, but I made them all at once.

Basically: I decided to make my own eyes from a photo. You know, for personal use, no idea I'd ever be attaching them to a post on MTS2... It turned out as your pretty basic blue... (not a self sim in the picture - I just threw her together to take a picture... Poor unloved Sim.)

(I think that's a Raon hairstyle. Nouk lipstick? No idea what the rest might be. Sorry.)

Then, naturally, followed some "basic" recolours. So I arrived at a massive set of "normal" eyes, which, looking back, are nearly all eyes one would only use for a more "fantasy" sim.... After the first greens and blues, they became more and more hand-painted - the light brown and golden yellow I practically remade the whole eye. I'm rather pleased with the red, though.

And after that I kind of blinked awake at 2am, metaphorically surrounded by crumpled up rejected attempts, and a massive heap of eyes blinking back at me - the obligatory alien eyes, then some with stars as the reflections, a random one with leaves in it, some which I'd attacked with the blur brush when I was annoyed, and then found something new and interesting... And several random experiments, which I can't explain. I use eyes with really shadowy schleras for my fantasy sims (which my attempts at a self sim always turn into anyway), but I made a "clean" version, with the eye cut and pasted onto the Maxis schlera, so it's all white... I was going to use one of the awesome schleras out there, but by the time it occured to me, I was halfway through "fixing" the eyes, and I just threw my arms up in annoyance, and carried on.

Possibly I will do that, if I can recover from the pain of this attempt... *clutches war wounds*

Oh - I have a thing for large eyes in the sims - they look better from a distance, and I don't play the whole game zoomed into my Sims faces... so these probably dwarf the delicate little eyes I see a lot of here, but they're not THAT much bigger than the maxis eyes, which I always treat as the "normal" size, as it was what they intended Sims to look like... Just a warning, if you hadn't already noticed, and prefer cute ikkle eyes.

(The blocks of eyes are using the Maxis alien skin (not sure why I did that...) and that's louis hair falling into his eyes. He's a cutie. :P)

I think that's all I have to say for myself, as an apology for this.

I hope you like at least some of these eyes. :D

Additional Credits:
Credit to pretty much anyone who's ever put mouse / tablet pen to eyes and made something shiny.