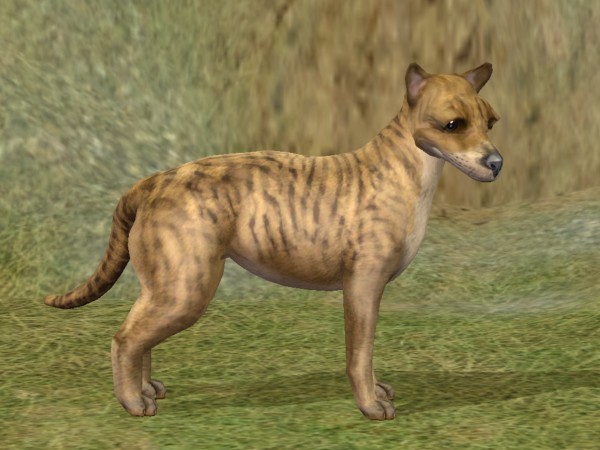 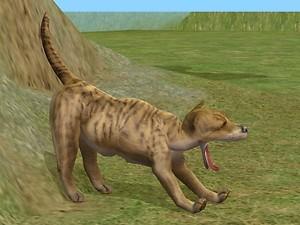 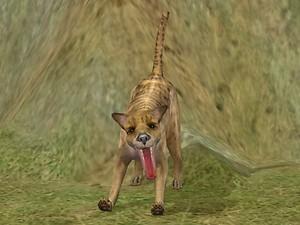 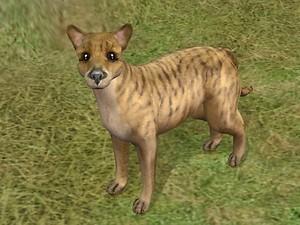 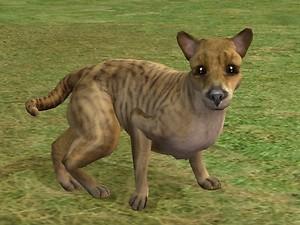 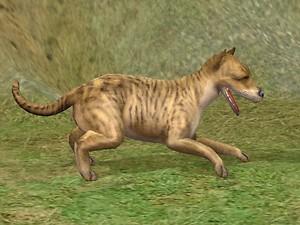 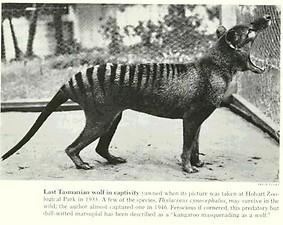 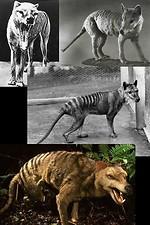 Picked Upload! This is a picked upload! It showcases some of the best talent and creativity available on MTS and in the community.
O.K., so its shape and coat pattern's rather off, but this was the closest I can get to a Thylacine-like dog given the tools we have on CAS. The Thylacine looks like a cross between a kangaroo and a canine of sort. Also known as the Tasmanian Wolf or Tiger, it's not really a "cute" animal, but I really wanted it in my Sim world since they no longer exist in ours.

The last captive Thylacine, later referred to as "Benjamin" (although its sex has never been confirmed) was captured in 1933 and sent to the Hobart Zoo where it lived for three years. [...] This Thylacine died on 7 September, 1936. It is believed to have died as the result of neglect — locked out of its sheltered sleeping quarters, it was exposed to a rare occurrence of extreme Tasmanian weather: baking heat during the day and freezing temperatures at night.

From the early days of European settlement they were rarely sighted but slowly began to be credited with numerous attacks on sheep. This led to the establishment of bounty schemes in an attempt to control their numbers. The Van Diemen's Land Company introduced bounties on the Thylacine from as early as 1830, and between 1888 and 1909 the Tasmanian government paid £1 per head for the animal (10 shillings for pups). [...]

.....In March 2005, Australian news magazine The Bulletin, as part of its 125th anniversary celebrations, offered a $1.25 million reward for the safe capture of a live Thylacine. When the offer closed at the end of June 2005 no one had produced any evidence of the animal's existence.

P.S. Well, today's uploads will most likely be my last unless, by very small chance, I come up with something cute that I want to share. But I'm sure it won't be for some time cause, currently, I'm dying from Sim dog making overload.

Besides, I think I've covered most of the popular breeds?... And sorry guys, I am no longer accepting requests. Sorry!!! *hides* If you have a breed that you want in your own game, take a look at the dogs I have up and find the one with the most similar shape then make the necessary changes. Sometimes it takes as little as recolouring to get it to look like the breed you want. If you'd like to share the altered version, that's fine too, provided that it's a free site and you post a link back to the original dog, PLEASE!!! I made these dogs exclusively for MTS2, after all. Last but not least, thank you again for all your kind words! You people are so sweet, and I feel very honored!

: And thank you, MTS2 staff, for reviewing my many uploads, not to mention building and maintaining this site. I'm sure I speak for most people here that we are so very grateful for all the work you guys have put in! Thank you, thank you, thank you!!!

*If you're getting an error message when you try to install my dogs, please try opening the file with Clean Installer instead. I think this is the link to download the software: http://sims2pack.modthesims2.com/index.php?page=3


*****PLEASE DO NOT REUPLOAD MY WORK ELSEWHERE AND CLAIM IT AS YOUR OWN! SHOULD YOU ALTER IT IN ANY WAY FOR UPLOAD (ON FREE SITES ONLY PLEASE), REMEMBER TO PROVIDE A LINK BACK TO MY WORK. THANKS!*****