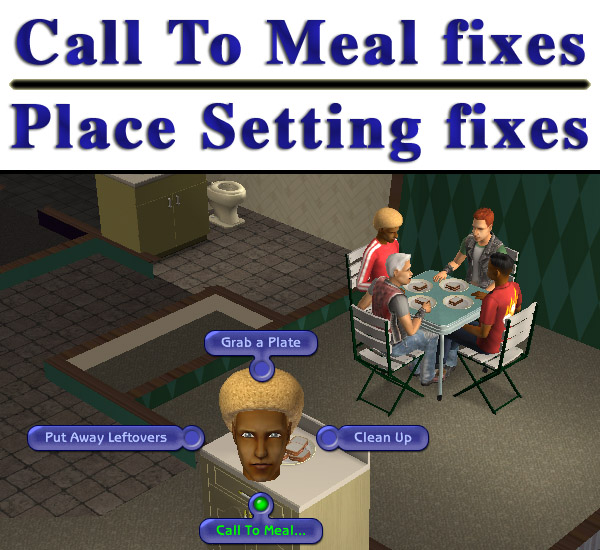 Created by dickhurt View Policy / About Me View Downloads Home

Quick Info
~~~~~~~~~~
* You must also download the following addon(s) for this hack to work correctly:

df_wake_up_apartment_neighbors_fix.package
http://www.modthesims.info/showthread.php?t=344268
- This is only necessary if you have the Apartment Life expansion pack. It allows the sleep-related fixes described below to work for neighbors on apartment lots. But you do not need it if you already use apthack by MATY, which seems to have a similar effect as my fix. The "Apartment Fixes" hack from Simlogical's Inge Jones stills needs my fix though.

Nightlife (or higher) is required to have the "Call To Meal" option available, since it was added by that expansion pack. But the place setting fixes are applicable to (and compatible with) the Base Game and/or University.

This hack changes the behavior of the "Call To Meal" interaction and of the place setting logic. When a Sim serves a meal, individual plates or bowls are set down at any available tables for all of the Sims (and greeted visitors) in the household. I refer to that process as "place setting". Be aware that most of the changes can be toggled off using the Customizing information, should you wish to selectively restore any of the default game behaviors.

These are the "Place Setting" fixes:

- No longer sets a place for toddlers, since they are too young to eat adult food anyways (and they can not sit at a table either - only a high-chair)

- No longer sets a place for plantSims or servos, since they don't need to eat human food (they lack a hunger motive)

- No longer sets a place for dead Sims (ghosts); take a guess why!

- No longer sets a place for sleeping Sims, since you don't know how long they will be asleep for (the food could be spoiled by the time they awaken)

- While visiting a neighbor's apartment, allows places to be set for everyone inside of that neighbor's apartment (so you can share a meal more easily with the neighbors). * I recommend using my "Better locations for eating" hack to help make that scenario possible. The two hacks work very well hand-in-hand!

- No longer sets an extra place just because a high-chair exists on the lot, which the default game had done even when you didn't have any kids!

These are the "Call To Meal" fixes:

- No longer sends Sims to empty plates/bowls to eat, since that just causes the interaction to get canceled (obviously, you can not eat from an empty bowl)

- Calls multiple Sims to a serving platter, instead of just 1 Sim (very awesome)

- Allows "Call To Meal" to function on custom content Serving Dishes/Platters (and thus, it probably conflicts with any hacks that do the same, so check for and remove any conflicting hacks!)

It also prevents grabbing plates/bowls from empty serving dishes, which was a glitch present in every EP/SP and the base game. It had usually occurred when 2 Sims each tried to grab a plate when only 1 serving was left. The game let each one grab a plate, with the last one coming from an empty platter.

One last feature allows Sims to make multiple attempts to grab the food dish, in case the first time failed. Why would it fail? Another Sim could have been blocking the path. This feature is very important for Call To Meal interaction. Since multiple Sims can now grab plates off of a serving platter, there is a high chance that the Sims will route to the platter at the same time and bump into each other each trying to grab a plate. That frequently results in 1 or more Sims failing to grab the plate they wanted and their "Eat" interaction gets canceled. But this "multiple attempts" feature allows them to try again a few more times if they failed their first attempt. The feature does affect all attempts to "Grab A Plate" off of a platter, not just "Call To Meal" even though that is where its most useful.

For best results, I highly recommend pairing this with my other hack named, "Twins fixes and serve meal fix".

* Check out the readme.txt file for more information.

You love my hacks?