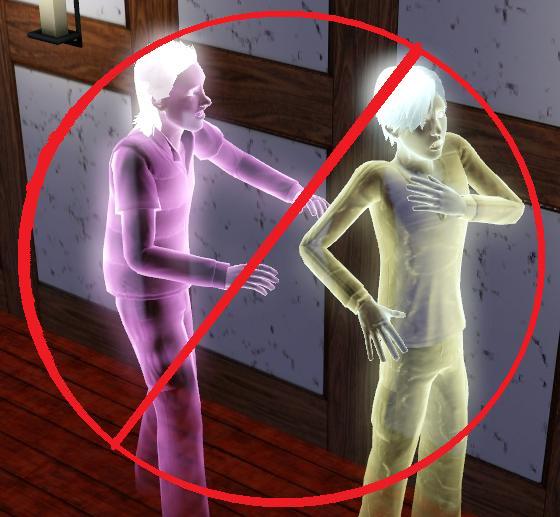 Extra special thanks to Daciasil for making this update possible while I was busy with college!

Tired of your ghost sims scaring everything they come in contact with, including other ghosts? What about your sims freaking out at the sight of every Mummy and Simbot they see?

Well, no longer! this small mod removes the annoying "A ghost!" "A mummy!" and "A Simbot!" autonomous reactions from the game, I found it rediculous that my ghost sims were surprised by the existance of other ghosts... so I disabled it, and figured others may want to do the same, and have now added optional packages that do the same for the mummy and simbot reactions

Will NOT alter your sims in harmful ways

Will NOT cause your entire sim-universe to implode (worse-case scenario is that it doesn't work, most likely caused by you not having the .cfg file, or the mods in the right place)

Will NOT function if loaded with another mod that does the same thing, but why would you have two seperate mods that do the same thing anyhow?

WILL kill any and all cases of the "A ghost!" autonomous reaction, as well as "A mummy!" and "A Simbot!" reactions, if you chose to install those as well

WILL kill the reactions to skinny dippers and Bonehilda, if you install those packages.

WILL remove the relationship changes caused by being an Emperor of Evil (Loss for most sims, gain for criminals/evil sims)

IS compatable with any/all other mods that do not effect this action (the modified tuning file deals with these specific reactions, so conflicts are near-impossible unless you have another mod that does the same thing)

IS now compatible with World Adventures and/or Ambitions! (which are required for the mummy and/or simbot reaction removers)

IS now compatible with Generations!

IS now compatible with Pets!

IS now compatible with Showtime!

IS now compatible with Supernatural!

At the moment, we can only remove the relationship loss for the Emperor of Evil, but it may be possible to remove the booing and cheering as well, I intend to revisit this at a later time.

If problems arise, leave a comment and/or send me a PM

Potential Issues: None that I am aware of

Usage Policy:
You may:
post non-direct links back to my mods (no posting links that bypass the mod page and grab just the file)

assuming you know how to, tweak the mod for your own personal use

re-upload my mods anywhere, for any reason, no exceptions

upload a tweaked version of one of my mods, even if its an update for a new expansion that I haven't updated for, without my permission.