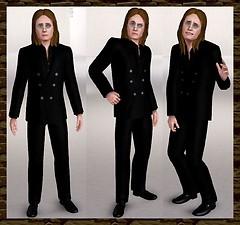 Created by monca533
View Policy / About Me View all Downloads
Uploaded: 10th Jan 2010 at 11:05 PM
This is my version of Ozzy Osbourne.
Here, some informations about him extracted by Wikipedia:
John Michael "Ozzy" Osbourne (born December 3, 1948) is an English singer-songwriter, whose career has spanned five decades. Osbourne rose to prominence as lead vocalist of pioneering British heavy metal band Black Sabbath, and eventually achieved a multi-platinum solo career between the early 1980s and mid 1990s which revolutionized the heavy metal genre. As a result he is known as the "Godfather of Heavy Metal" and because of some of his material, the "Prince of Darkness." In the early 2000s, his career as a celebrity hit a new zenith when he became a star in his own reality show, The Osbournes, alongside wife/manager Sharon and two of their three children, Kelly and Jack. In August 2008, Osbourne stated in USA Today that he intends to retire from his music career after two more albums.

Glasses - 'Morpheus'-style Shades for Men and Women, Teen to Elder by: EsmeraldaF


NOTE: For that Ozzy will be exactly like this in your game, you must have some kind of slider hack installed. I’d use:

PLEASE NOTE: to install, put her in the saved sims folder in Documents - Electronic Arts - Sims 3 - Saved Sims. She will then appear in your sim bin.
If you don't wish to download all these things, your game will replace them with whatever you have.


Thank you very much to all creators listed above for their wonderful work.


And thanks a lot to this people of CF:
Neonal18, Jaylo2112, EsmeraldaF and Traelia
Files Need help with downloading or installing content? Click here!