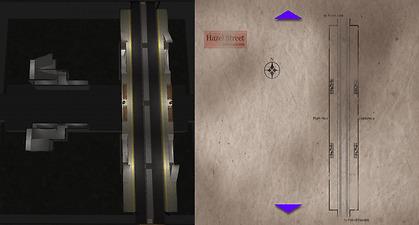 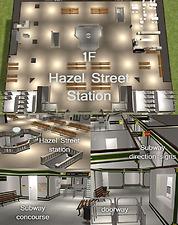 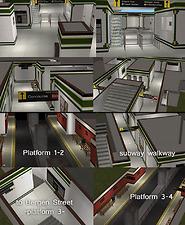 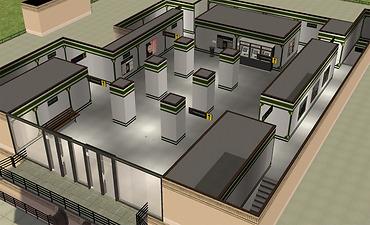 Created by meriel
View Policy / About Me View all Downloads
Uploaded: 7th Apr 2010 at 12:24 AM
Updated: 4th Apr 2012 at 8:03 PM - UPDATE added remake version
So, as the title says, this is the Hazel Street subway station - located beneath/beside the shopping mall in Silent Hill 3. This took a long time to make as well, especially considering I'm not that good in making basements.. and now I had to make four floors as a basement! :O And it worked out... ok, not really how I wanted it to be, but at least it's playable.

I don't know what it looks like above the subway so I used my imagination. I think it turned out more like a train station than a subway though, but whatever. Then you can use it both as a subway and a train station!

Since the ground does go down about four stories, you shouldn't put this lot where the neighbourhood ground is low, or else the basement will be "flooded" (get a blue layer). This is what happened to me when I was almost done and I tested to move the lot, and it got the blue layer. I freaked out and thought I had to start all over. But then, Mod The Sims game help came to the rescue. Thank you!

For those of you who don't play Silent Hill or doesn't even know what it is, you can just use this as a regular subway (or train station) for your sims. Of course it doesn't work as a real-life subway but you get my point.

Content Required But Not Included:
SIM TODAY Newspaper Stand - http://www.modthesims.info/download.php?t=230259
WallSims Zoom painting (mesh, you'll need this to make all the "subway_sign"'s I've made work) - it is now avaliable on the Sims2 Graveyard, go to WallSims and download the wallsims_zoom_painting_mesh.rar

UPDATE
The wallsims link doesn't work. Thanks to lizbianish for letting me know. The http://www.wallsims.net site doesn't work either. I'm not sure if it's temporary or not. I'll see what I can do and I will update if anything changes.
UPDATE
It seems like wallsims is permanently down. That means there's no link to the mesh and I can't include it in the package file. Instead, I might re-create the signs using another mesh. It's going to take a long time to do so though, so we'll see when and if I'm gonna do it.
UPDATE - August 25th, 2011
You can now get the wallsims mesh at the Sims2 Graveyard. Go to WallSims - download the wallsims_zoom_painting_mesh.rar file.
I emailed the Graveyard about this months ago and it seems they updated the site with some wallsims files in June.

(I just remembered to check it. Great thing it's avaliable again though!)
UPDATE - April 4th, 2012
Added a remake.
Well, ok so, my intention with this remake was to actually make it a bit smaller (in file size) and decrease the amount of expansion packs required. But um... that didn't really go as planned. It is a bit smaller, and this version doesn't need Bon Voyage, H&M nor Open for Business. But basically what I've done is delete a couple of benches and other unneccessary items that doesn't even show up in the Silent Hill game. And I also remade the top floor - the station hall or whatever you'd call it. A picture of it:

I also felt this station hall looked more Silent Hill-ish, as it goes more in style with the rest of the station.

Oh, and can I just say that this lot has definitely been my favourite to build so far. Sometimes I feel like I just want to redo it from scratch. I loved the whole challange of it, and making the signs and all that.


EDIT:
Apparently I hadn't checked expansion/stuff packs required good enough. I was getting doubtful about it so I checked and it turned out it doesn't need the University and Ikea stuff packs. Sorry about that.

If you need help with anything, or come across any problem, let me know in the comments or by PM.
Enjoy!