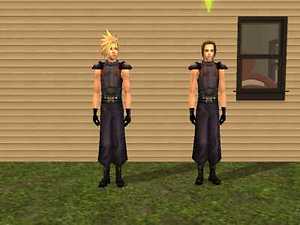 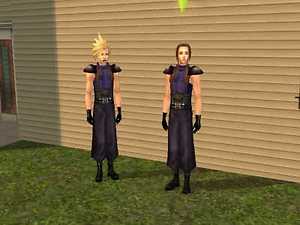 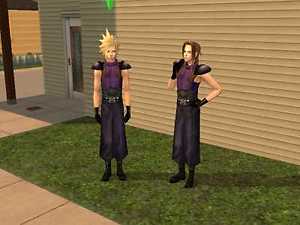 4,932 Downloads Quick download 332 Thanks  Thanks 30 Favourited 33,830 Views
Personal Picked Upload!   This is a personal favourite of the creator!

Ever looked at your Final Fantasy VII sim and thought, "Gee, I wish I had a SOLDIER career for these guys."

After two years I have finally added a custom icon, written chance cards (most of which are copy pasted from the base game Military career but with a more Final Fantasy VII flavour), attached custom uniforms, and generally made it a lot better. The SOLDIER uniforms were created/edited together by crabofdoom here. Included in the rar is a horrific female conversion I did with SimPE (as you can see from the pictures, Mrs. Aerith Strife appears to have a floating head), but please download the male outfit and mesh from the linked page. Despite my best attempts at giving the career a custom reward, I couldn't get it to work, though it might be because I was attempting to link a harvestable tree from Build Mode

Level 1: Private, Third Class
Description: Inspired by propaganda and rumours, you have decided to join the Shin-Ra company's military division. Have fun in the Security Department.
Wage: $500

Level 2: Private, Second Class
Description: With no real need for the military, Shin-Ra has everyone doing battle training. Keep building those muscles, and before long those simulations will be a snap!
Wage: $600

Level 3: Private, First Class
Description: Training has moved on to sparring sessions with SOLDIER. Your fellow operatives seem to dislike the SOLDIER, but something about them seems very attractive to you. Maybe one day you can join them.
Wage: $750

Level 4: Corporal
Description: Further training sessions with SOLDIER have only served to increase your desire to join them, so you've submitted an application to be transferred. In the meantime, you've been selected to test weapons for Shin-Ra. Don't get distracted.
Wage: $900

Level 5: Specialist, Fifth Class
Description: Unfortunately Shin-Ra have received too many SOLDIER applications and you weren't selected to become a Trainee. There's no time to get depressed, though: there's rumours of war in the air, and you can't afford to get sidetracked.
Wage: $1000

Level 6: Sergeant
Description: Shin-Ra have implemented guard patrols to keep crime in check in Midgar. It's your job to organise them and choose who gets to go.
Wage: $1250

Level 7: SOLDIER Trainee
Description: An accident in the SOLDIER training room the other day resulted in the death of a Trainee. Bad news for him, but great news for you! Don't worry, the training isn't always that lethal. Maybe.
Wage: $1500

Level 8: SOLDIER Third Class
Description: Phew! Looks like the mako infusion process didn't kill you after all! It might be a little hard to get used to, but hey - now your eyes are a cool colour!
Wage: $3000

Level 9: SOLDIER Second Class
Description: You're close to the top of the food chain, but before you can become a SOLDIER First Class you have to teach a class of Trainees, and those Trainees can be real brats. You should know - you were one!
Wage: $5000

Level 10: SOLDIER First Class
Description: You've finally made it to the top. Few ever reach First Class, but now you're among the best of the best. Now you're on par with Genesis Rhapsodos, Angeal Hewley, and even the legendary Sephiroth himself. Congratulations, SOLDIER!
Wage: $7000

The ranks come from http://www.freewebs.com/shinracorpomnislash/index.htm, and I admit that the first few ranks are mere military ranks. But come on: there's only like four ranks of the actual SOLDIER in the games.

So, that's it. I hope you enjoy my SOLDIER career - and I'm sure your sims will love it too