Tattooinator, a tool for creation of custom tattoos - update 8/28/13 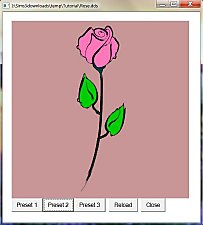 1,638 Thanks  Thanks     362 Favourited
This started as a quickie tool to package tattoos for the game, but several people requested a previewer so after lots of hard work here it is.

Tattooinator takes your name for your tattoo, a 512 x 512 DDS file with the image, your CAS preset colors, and your sort order for CAS (high to low) and creates a package for the game. Tattoo images show up in the game somewhat differently than in an image editing program or a viewer, but the previewer will show you how your tattoo will look with each of your presets. 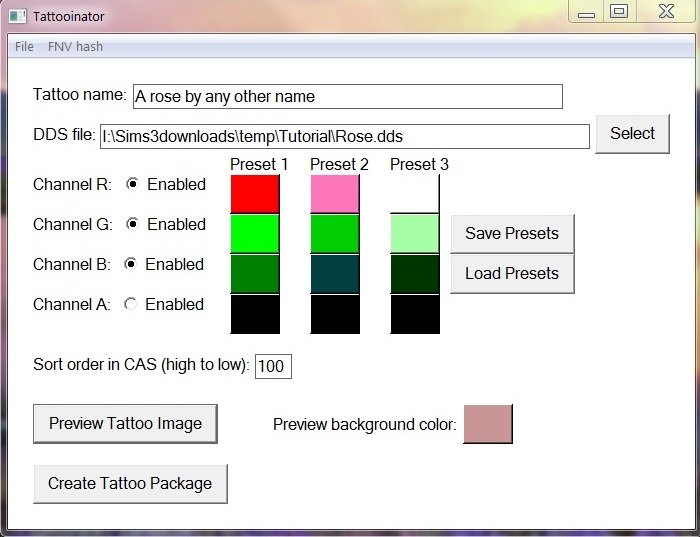 Compatibility
Windows only, sorry. Under Windows 7 you may occasionally have weird delays browsing for files. This appears to be a limitation of the platform I use for my programs.

A huge thanks goes to TwinHerder for patiently explaining layers and color blending and providing the equations that make the previewer work, not to mention kicking my butt to attempt it in the first place.

Another big thanks to Bordew5 for creating the icon I've built into version 2 and up.

Troubleshooting
Tattooinator randomly freezes when browsing for a file! - This is a known problem under Windows 7, and seems to be a glitch in the platform I use to program. Wait half a minute or so and it should start working again.

I don't see my tattoo in CAS! - Most likely either you don't have Ambitions or the 1.12 (minimum) patch installed, or your game is not correctly set up for custom content. Please, if you post here with this problem tell me whether other custom content works in your game and whether you have Ambitions and/or the patch. If you don't I just have to waste everyone's time asking.

Additional Credits:
The folks at the Wiki
PL Jones for S3PE Echo for Postal

I assumed custom tattoos just don't work without Ambitions, and you know what they say about people who assume. They do in fact work with just the patch, and Tattooinator V1.1 fixes a compatibility problem and will package tattoos that work with TS3 1.12 and up / WA 2.7 and up / HELS 3.3 and up, and Ambitions.

Version 2.0 of Tattooinator is uploaded. Changes/new features:
I've done a tutorial for the convert function which is in the Create/CAS Parts forum: http://www.modthesims.info/showthread.php?t=432168

Version 2.1 of Tattooinator is uploaded. The ability to select the genders and ages that the tattoo is valid for and will appear in CAS for has been added.

*** Update 9/8/2012 *** Version 2.11 uploaded.
This is an update only to the underlying platform - salflib.dll. It improves file selection performance when running on Windows 7 so that you should be able to select significantly more files before it freezes for a minute or so.

*** Update 8/28/2013 *** Version 2.2 uploaded.
Another update only to the underlying platform, for compatibility with Windows 8. You must replace both Tattooinator.exe and salflibc.dll.

If you need more info, see:
Back to download view
193 Comments / Replies (Who?)