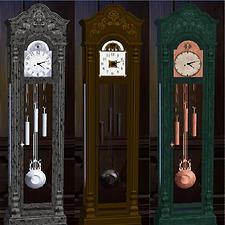 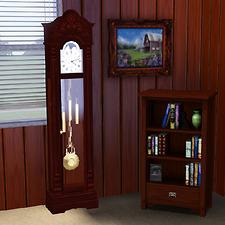 1,456 Thanks  Thanks     157 Favourited
This is a new mesh, and means that it's a brand new self contained object that usually does not require a specific Expansion pack (although this is possible depending on the type). It may have Recolours hosted on MTS - check below the description for more information.
I have been deeply disappointed at the continuing lack of a grandfather clock in TS3. So for my first TS3 object, I've converted the one from TS2. It comes with four presets, each with its own face and three fully recolorable/designable channels:

- "TS2 style", gold face with Roman numerals
- "Haunted House" with peeling paint, a silver face and Hindu-Arabic numerals
- "Western" (I guess?) loosely based on a plainer one handed down from my actual grandfather
- "Slightly more contemporary with no numbers and a copper theme because I was tired of wood"

The clock keeps the correct time, though alas, it's not windable nor (as far as I know) tinkerable. If EA gives us a proper clock in some future expansion, or at least one with a moving pendulum, I may update this one accordingly.

This item has been successfully tested in a base-game only installation as well as with both EP's installed. Please report any issues you may encounter.

I offer my apologies for the choppy appearance of the clockworks in the screen shots. Because of the visual effect the case glass has on anything behind it, it's very difficult to get a good clear picture of them.

If you need more info, see:
Back to download view
44 Comments / Replies (Who?)