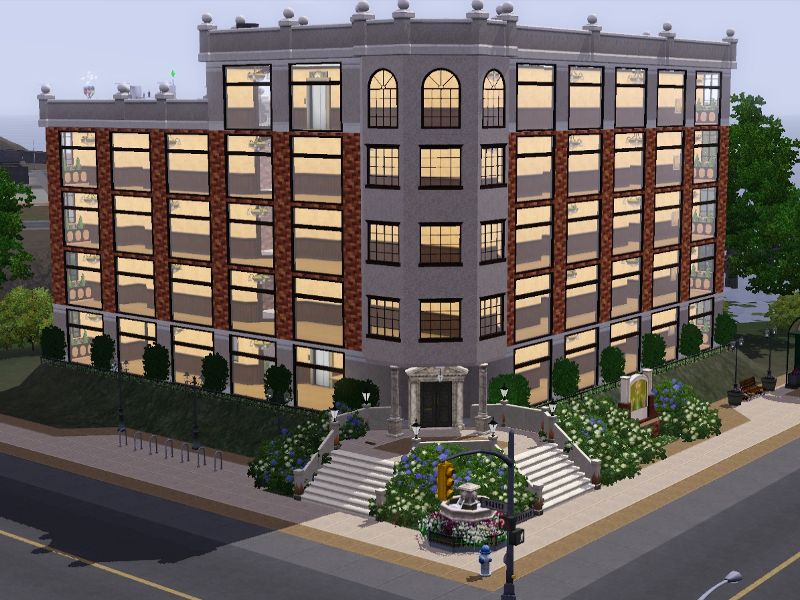 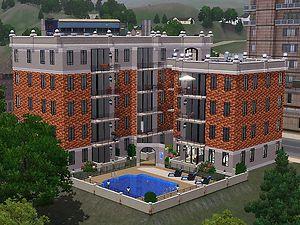 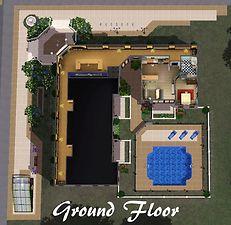 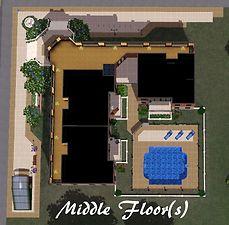 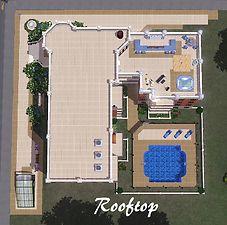 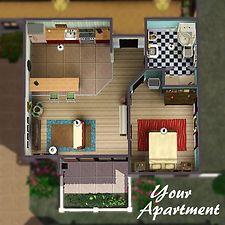 simsasha_front.jpg - width=800 height=600
The front of the building.

simsasha_back.jpg - width=800 height=600
The back of the building, around the pool.

simsasha_groundfloor.jpg - width=724 height=704
Ground floor plan. Notice that the playable apartment is to the right of the "L".

simsasha_roof.jpg - width=800 height=794
The rooftop. Notice the balcony to the right.

Created by Nukapei View Policy / About Me View all Downloads

So, you're a young adult Sim, just starting out in life. You cross the bridge into Bridgeport, captivated by the bright lights of the big city. You've finally arrived! You're going to make it big! Start a band, or star in your own blockbuster film, or maybe even write your own highly successful screenplay. The point is, you're going Places with a capital-P, and just by crossing that bridge you're halfway there.

But then you start looking for a flat, and reality hits. Everything is either far too expensive, or far too trashy. Would you rather pay out the nose, or live in a roach-infested dive? Nothing nice is in your price range, and nothing in your price range is nice. What's a young Sim to do?

Well, today is your lucky day. A one-bedroom condo has just listed in the world-class Simsasha Manor, and the owner wants to get rid of it now and so is selling it on the cheap. You'll be able to enjoy world-class amenities at a fraction of the cost! And, with all that money you're saving, you'll be able to furnish it nicely -- maybe not high-end, but at least nice enough that you won't have to worry about cold showers or unevenly-cooked food! And there's even a little corner of grass off the patio, perfect for growing your own produce and saving on grocery bills. Score!

I'm not really sure about EA's obsession with putting all the new apartments as high up as they possibly can. Sure, some penthouse apartments are nice and all. But they had to make penthouse suites out of Every. Single. One. Highly annoying.

Besides which, I'm the kind of gamer where literally every single Sim I've ever played has had a garden of some sort, if nothing else to save them from having to go to the grocery store. Can't exactly do that in your 14th-story apartment, can you? Not unless EA comes out with a TS3 version of the hydroponics station from TS2, at least.

So I split the difference, and Simsasha was born. So named after my cat, who decided she must have attention and jumped up onto my lap as I was trying to settle on a name. It's a wonderfully versatile building, high enough not to look out of place in the city but low enough that it wouldn't look too bad in Sunset Valley, either.

It has everything a regular "apartment" EA-style does -- complete with mailbox and trash chute. The only thing is that, for some reason, no other NPC's move in. I'm not sure why. But don't worry; random townies tend to show up to take advantage of the amenities on the rooftop balcony, so you shouldn't be without company for long.

I tried to decorate the condo in a sort of modified Bohemian style -- cheap but also colorful and nice. Trust me, there are decorative items everywhere -- no room has less than a "Decorated" moodlet. Why condo? Because the LN "apartments" resemble condos much more than apartments, in my opinion. You don't even pay rent, just a one-time fee. That sounds more like ownership than leasing, to me.

I also put a subway station right there, so you don't have to take the taxi halfway across town to pick up a subway. This also brought up an unexpected bonus -- if you have a musician Sim, and are short of cash, just go Play For Tips in the subway. I was shocked how fast my Simmie started raking in the dough.

And just so you know, the middle three levels are dummy levels. The elevator doesn't stop on those floors, and there's nothing there even if it did. They're just to get the top level up as high as it would go.

This lot was built where Verdanda Villas is in the default Bridgeport (99 Embarcadero Drive) but it also goes well across the street at Terpsichore Studios (4400 Hamming Pier Road), although you'll have to kick out the family living there first. If you're having difficulty finding those lots, they're right across from Waylon's Haunt (right by the docks)

NO CC OR STORE ITEMS WERE USED TO MAKE THIS BUILDING! Well, alright, one pattern that I completely forgot didn't come with the game. Other than that, no CC needed. You will, however, need World Adventures, Ambitions, and Late Night (of course). Fast Lane Stuff is helpful as I included two items from that stuff pack, but both items are decorative so it's not the end of the world if you don't have the pack -- they'll just disappear.

Someone asked about the amount of WA content included in this lot. Because there wasn't that much content at all (but some of it was rather important, like the fence defining the patio from the common area around the pool) I went ahead and deleted all WA content for a WA-free version. I manually checked every single item, wallpaper, fence, wall hanging, etc to make sure it wasn't from WA. However, unfortunately patterns don't have the little icon indicating where they came from. So some patterns included with WA might still be in the building. It just means you might have to spend some time in CAS.

Custom Content Included:
- Wood Pattern by Around the Sims 3
Other Information

Description: Ritzy, classy, contemporary ... these are just some of the words that can be used to describe the condominiums at Simsasha Manor. Another word is "expensive". Lucky for you, a cheap, one bedroom condo has just been listed! Enjoy all the world-class amenities at a fraction of the price.

Description: Ritzy, classy, contemporary ... these are just some of the words that can be used to describe the condominiums at Simsasha Manor. Another word is "expensive". Lucky for you, a cheap, one bedroom condo has just been listed! Enjoy all the world-class amenities at a fraction of the price. DOES NOT REQUIRE WA!

About Me & My Policies

Hello, and thank you for taking an interest in me and my creations!

I've been a fan of the Sims franchise since the very beginning, especially of how versatile user-created content made it. Sure, the game is awesome, but making stuff for it, seeing your creation in the game, really made the difference.

So, without further ado, my policies:

I do accept requests, but reserve the right to reject them. FYI, I'm always up for a good real estate challenge. :)

Please do use my creations in your own game, to any extent you want. Use it as-is, change it around, add to it, take stuff away, whatever.

Please do recolor and/or otherwise edit my content significantly, and upload it to be downloaded with credit and a link.

Please do not upload any recolors or other edits to the Exchange, or to a pay site. If people are paying to download your stuff, then that means you're good enough to make your own.

And, here's the big one, please, do not, under any circumstances, upload any creation of mine and claim it as your own.