XML Story Progression: No Vampires, No Emigration, No Move 1.63 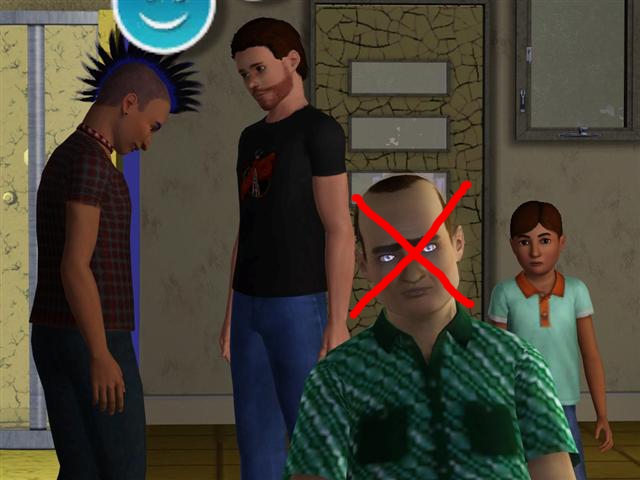 593 Thanks  Thanks     97 Favourited
The 1.63 versions have the FutureWorld demographics handled the same way as the other worlds, as described below.

1.55 versions: A function called "Decrease Mermaid Population" is removed, similar to the other occult functions mentioned below.

1.50 versions: A function called KillRoommate, similar to KillSim, is removed. Otherwise, the demographics file for the University world is done the same way here as with the others.

Description, 1.38 versions:
The No Vamps and No Celebs in these mods are unnecessary now, the checkmarks in Options can be used instead.
Also, all the Demographics XML's are inside one single .package now, instead of Bridgeport, Twinbrook, App Plains being separate.

Changes with these 1.38 versions:
"Kill Sim" is removed, to prevent random sims being chosen for death as a population reduction or family size reduction method.

"Quit Job" and "Get Fired" are removed for sims of all ages, as possibly this will prevent the townies/residents from being moved around from career to career. I haven't observed this long enough in a game to see if it actually works this way, or if some other factors are switching the jobs on sims. The "Retire" function for elder sims is still in place.

The same applies to Decreasing the Occult Population, I don't know what this function will do if chosen by the story prog. Remove the occult status on a sim, or move them to limbo? I can do this myself to a specific sim if I want to.

Description earlier versions:
NOTE: The current files which are valid for the 1.36 game are the files named 1.26. These all have a 4th file for Appaloosa Plains. Starlight Shores is covered by the main file together with SunsetValley, CaW worlds, etc.

This mods EA's XML story progression. The generating of Vampires is turned off, so your fav 'townie', 'inactive', 'resident', call them what you will, won't be chosen by the AI to turn into a vampire at 1 am or thereabouts. Vampirism itself is not disabled in any way, the vampires in Bridgeport when you start a new game are still there. You can still play a vampire in Sunset Valley or anywhere you want and turn other sims to vampires. (File named XMLSPNoVampires.)

In a 2nd flavour emigration is also turned off, so townie households will not simply move out of town. These are the ones you read about in the newspaper, maybe they were your favorite neighbors and they simply disappear, gone forever. This should never have been implemented in the game IMO, so I have removed it. (File named XMLSPNoVampsNoEmigration.)

The 3rd flavour includes the following in addition to the above: The option for townie households to Move to a Smaller House is removed, moving to a larger house is still allowed. I have made this change to prevent the situation, happening quite frequently, where some children grow up and move away from their parents, or a spouse dies, the owner of the house for many years is forced by the AI to move to a smaller house because they happen to be alone. I want this single sim or couple to stay in their big house regardless of the moving away of family members. This reduces also the general amount of moving from house to house, which is too frequent for my taste (File named XMLSPNoVampsNoEmigrationNoMove).

There are 3 different .rar files here, these are the 3 flavours. However, inside each .rar file are 3 .package files. This is because Twinbrook Demographics and Bridgeport Demographics are separate XML resources, so each of these I've placed separately in it's own .package; reason being that you can install the large file, which applies to SunsetV, Riverview, CaW worlds, the vacation worlds. If you choose not to install the Twinbrook or the Bridgeport file for example, this world will be default EA with vampire generating; you can use this world as your vampire world and the others are vampire free. You can also of course use the Bridge or Twinbrook files, and not use the large file, in which case CaW worlds, SunsetV and Riverview will be default EA with vamp generating. No need to move my mod in and out of your Mods\Packages if you sometimes want to play with vamps, and sometimes you don't.

The XML resources used here are, in the large file:
Demographics

In the Twinbrook file:
DemographicsTwinbrook

In the Bridgeport file:
DemographicsNewDowntownWorld

A note on the three vacation worlds: these have vamp generation turned off by default, so no one should see vamps being created there. I have included these demographics files in 2 of the flavours to get the No Emigration and No Moving to Smaller House features.

See: Game Help:TS3 CC Basicswiki for a full guide!
Back to download view
141 Comments / Replies (Who?)