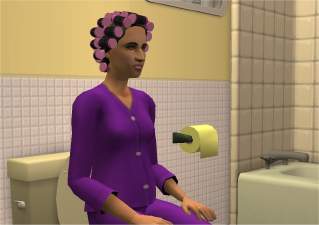 Picked Upload! This is a picked upload! It showcases some of the best talent and creativity available on MTS and in the community.
13th August 2019 - this career has now been moved over to my own site at tflc here. If there are ever any updates to this career, they will be available there. This file is now unsupported.


Update 7th September 2015 - I finally got around to correcting the foreign language issues with this career - something I should have done a long time ago. The career should display now properly in all language versions of the game albeit in English.

It was a bit of a shock that the file size plummeted so much. If anyone downloads this from this point forward and has issues, would you please post and let me know. I think it's ok but have no way of getting this tested. Thanks.

Why Mama Hick?
Are you kidding? Mama is great. The original Mama Hick - at least as I remember it - was feckless trailer trash in curlers who spent her days in her cleaning overalls and slippers with a permafag hanging out of her mouth. She'd harangue her neighbours, set the dogs on local children and gossip about Sim Lane's great and good to her friends: how Cornelia Goth was a mad old bat, the slovenly habits of those Roomie girls and how Bella Goth was no better than she should be. What's not to like?

She also, if you remember, had a no hope job to go with this lifestyle.

Well, we've had the curlers for some time but where are the no hope jobs in Sims 2, eh? Even the least well-paid and supposedly menial tasks are still swanky jobs with good pay and conditions and are well out of Mama's league. I want poor sims, not sims that can climb up up the greasy pole with almost no effort. I've never had that much interest in building great big posh mansions with every possible amenity and pretty, pretty sims. Blimey, before Seasons was released I made them live outside until they could afford to build enough walls to get a roof over their heads. Now they can't afford to buy the toilet instead. Which has its compensations of course (at least for me). "But why Mama?" you ask (again). Well, it's a long explanation which I won't bore you with. Suffice to say that when Sims 2 was released I decided to import all my characters from Sims 1 and, inevitably, some of the Maxis-made characters had made such permanent connections with my own sims that they had to come along too. I created Little Carping, a village by the azure sea, where they all went to live. Mama has been busy up to now making a disastrous liaison with a useless thief, living in a trailer and spitting out sprogs (I made her as an adult). But the time came, a while back, when she got past child-bearing age, had no money, no man about the place and Eldon was apparently permanently glued to the sofa watching the sport.

As for that Eldon, the less said the better in all probability. However, in Little Carping he delivers pizzas. What? Did you think he would go into the Slacker career? Oh no, that went to Bob Newbie; a secret porker of illicit chocolate bars at the late night service station if ever I saw one. No, Eldon doesn't have Bob's class. But that's another story ...

So, here's Mama's cleaning 'career' (and I use that word loosely). It's based on the slacker career but has its own unique GUID (so won't overwrite any of the Maxis careers). It is fully EP compatible. I've deliberately cut down the wages - Mama is poor and I have every intention that she stay that way - but there is a career structure with a top level that's quite well paid. Not that I ever expect Mama to rise above level three but I wrote something for the upper levels anyway and also the male version is fully written out. There's a full set of chance cards and I used the cleaning icon from the game as the icon for the career. The writing has a rather British slant - I am English - and uses names and terms for things that overseas friends might find a little unfamiliar. The first level is Scrubber, for instance, which I don't think is a term Americans use. There is no custom uniform but the maid levels make your sim use the maid outfit - if, like me, you use a default replacement, your sim will wear that (hurrah).

So, it's not a conventional career then but if you have a little Mama Hick or similar in your (sim) life, it's perfick.


Job Levels, Pay and Hours
Scrubber $94 M, T, W, Th, F Hours: 6am-14pm
Look, you have no qualifications and the bills are piling up. The pay and conditions are crappy but you need to work and you aren't qualified to do anything else. You'll be spending all day on your hands and knees scrubbing floors. Maybe you should have paid more attention in school.

Lavatory Attendant $122 M, T, Th, F, Sa Hours: 8am-16pm
The hours are doable - well, at least you are not getting up at the crack of dawn any more. The pay is pretty lousy and on occasion you find yourself with odd headaches which result from the fumes of the powerful cleaning fluids you're using. On the other hand, you have a private room to yourself - you get to share the cupboard with the mops and buckets during your breaks - and can get away from the punters and have a cup of tea in peace. Just don't look too closely at the contents of the pans.

Hotel Cleaner $167 M, W, F, Sa, Su Hours: 8am-16pm
Right, well, it's slightly better paid and the environment you are working in has to be a vast improvement over the public lavatories. On the other hand, you do not believe the habits some of the guests have. I mean, what was that in the toilet of 327? To get ahead, you'll need to develop those mechanical skills.

Cleaner $225 M, T, W, Th, F Hours: 6am-14pm
OK, you're working for the Council now cleaning the offices after hours. The number of toilets you are cleaning has decreased though getting the office carpet clean can be a pain with the ground in crisps and biscuits and the way the paper clips dig in to the pile. The pay and conditions have definitely improved, you even have a pension scheme and are unionised. Pay is still not great but you can pay the bills without worrying too much.

Maid of All Work $302 M, T, W, Th, Sa Hours: 8am-16pm
Well, that friendly chat with the boss working late one night in the Human Resources Office paid off nicely even if you were late home and had to pay the child minder extra. You've been offered a job as a mobile cleaner - you're the swat team of the cleaning world. You get to drive your own little car: actually it belongs to the Council but you're out on the road on your own, and you drive round to places that need cleaning services fast. Pay is improved so you might be able to buy your kids some new footwear this winter. Congratulations.

Housemaid $356 M, T, Th, F, Sa Hours: 7am-14pm
Another job with an early morning start but you're moving up in the world. You're working for the gentry now as a Flying Housemaid working your way around the posh residences of Little Carping and Carping Magna. They employ you to give the impression to their friends that they can afford house servants though they don't go to the expense of actually having you live in. General cleaning duties with limited lavatory time makes for a far more pleasant way to spend the working day.

Maid $412 M, T, W, Th, Sa Hours: 10am-17pm
Making yourself indispensable to those posh ladies and men in the neighbourhood was a good move. Being rich they like to save money and it's cheaper for them to pay you direct than pay for the Flying Housemaid service from the Council. You're getting so good at the cleaning business that you're now able to sell your services and keep all the money coming in, you're self-employed.

Cleaning Shift Supervisor $653 M, T, W, Th, F Hours: 8am-15pm
Your expertise at organising yourself and the work and your ability to deal with people has been recognised. You've been employed by the Council again to supervise cleaners in the job you once did yourself. You spend your days organising the poor mugs who will clean the lavatories but never see one yourself. The only downside is dealing with the personnel crises that crop up regularly as temperamental cleaners get sick of it and tell you to shove the job and walk out. The hours are easier and the pay is better but you need to develop personal and organisational skills to move on up.

Deputy Housekeeper $734 M, T, Th, F Hours: 10am-16pm
This is more like it. You've moved up to Deputy Housekeeper. You're now in charge of working out what work needs doing and where and then organising the Shift Supervisors and their teams. You report directly to the Housekeeper herself. A nice comfortable office, easy access to the kettle, decent pay and conditions, decent hours; you even get an extra day off a week. What could be better? Well, it's 'dead man's shoes' but there is the boss's job.

Housekeeper $800 M, W, F Hours: 10am-15pm
Wah-hey, top of the pile. Not bad for someone who started out with no qualifications to speak of. You report directly to the Council sub-committee on Sanitation and are responsible for strategic cleaning planning throughout the Sirencester area. You get a salary rather than a wage, a decent pension provision, plus shorter hours and your tea served to you at your desk by the Deputy Housekeeper. The only time you see a lavatory is when you use one. Let's hope nothing goes wrong...

Additional Credits:
Thanks to the usual suspects: the creators of SimPE and everyone who wrote those useful tutorials here on MTS2. Also, thanks to lauratje86 for encouragement in the creator forums.