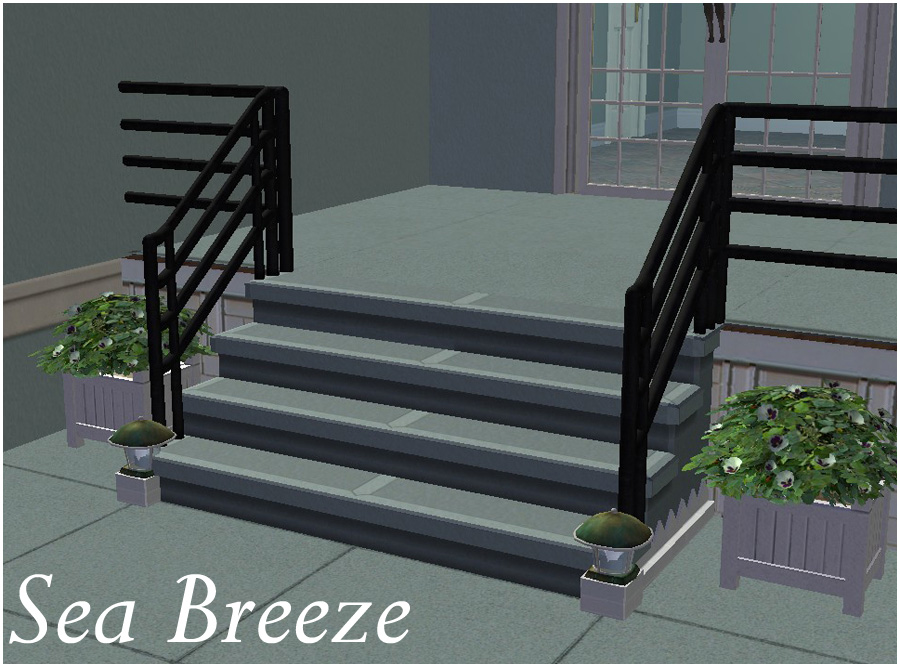 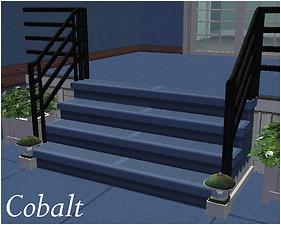 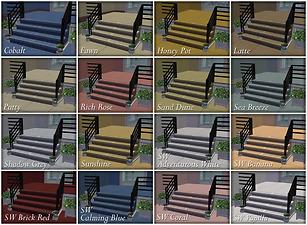 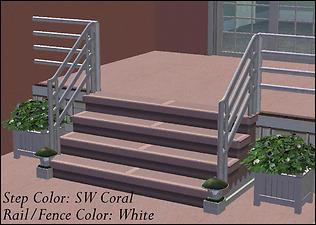 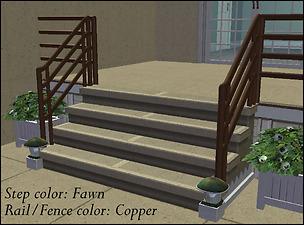 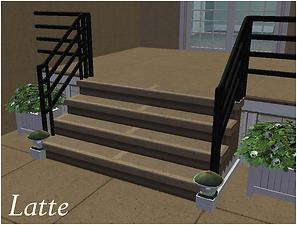 999 Thanks  Thanks     74 Favourited
This is a Maxis Recolour which means that it is a recolour of an item that already exists in your game. Please check the Expansion pack requirements to see which game pack it recolours.

I have a thing, as you might be able to tell if you look at my downloads, for plaster/stucco-textured walls. And I do find myself using the Maxis stuccos quite a lot on exteriors because for once I think that EAxis's colors and textures are fairly nice across the board. And unless I'm sticking wood decks on the building in question, I also use, inside and out, the concrete stairs that came with Uni because they are close in texture. Or at least I started using them once I discovered that the wonderful and marvelous HugeLunatic had made them recolorable.

Because she did that, I wasted no time in slapping slightly-tweaked versions of all of the Maxis stuccos that I had onto those concrete stairs. I belive the original, complementary walls are all base game, so you should have them. I think. (Someone please correct me if I'm wrong and I'll edit this appropriately...) But whatever he case: Woo! Stairs that match walls. Or, more accurately, that complement them; as near as I can tell, horizontal building elements like floors and stair steps aren't lit the same as vertical elements, like walls and columns, in the game. So even though the PNG files used to create these stairs (and the matching floors shown in the pics, which you will find in a separate upload) are exactly the same color as the wall PNGs, they don't show as exactly the same color in the game. But they do complement them very nicely. Like so: 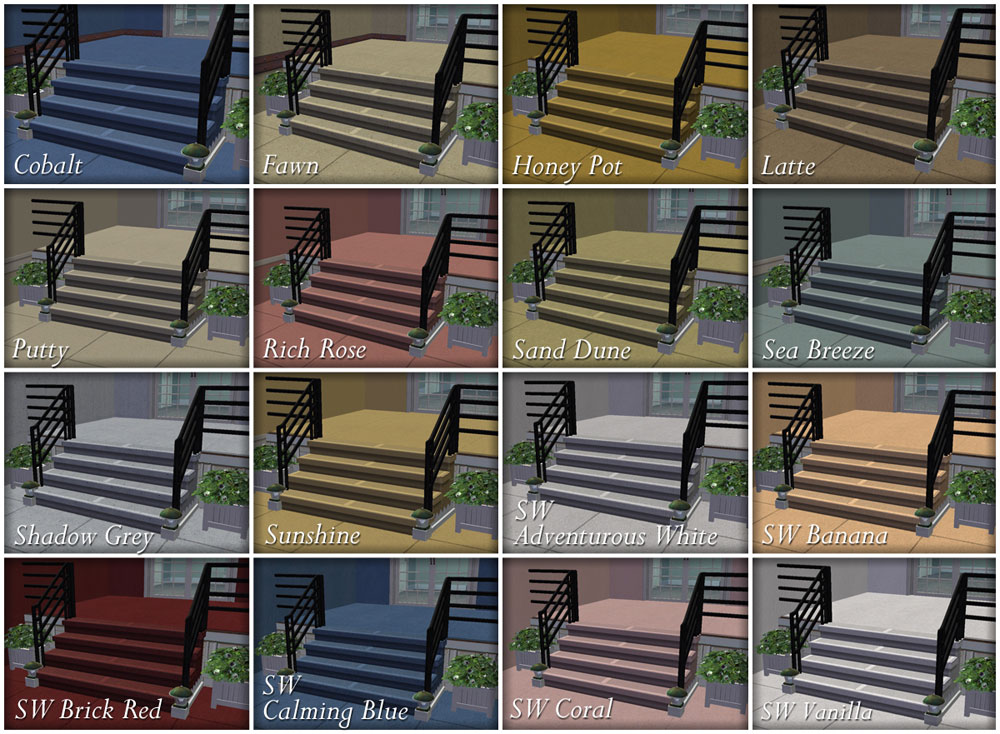 (Note: These are small pics meant to show all the colors in comparison to the walls; for closer-up texture details, see the below pics and a few more attached ones.)

Of course, it then frustrated me that I was stuck with black railings... So what the heck! I recolored those, too! I made a white version and a rusty-coppery version that was appropriate for desert/Southwest-style usage, at least...and then I made new fences to match. So what I ended up with was 48 stair recolors, because I, at least, have 16 different Maxis stucco walls. (Well, actually, I have two more: Paste and Way Off White...but they are not actually "stucco." They have no discernable texture at all and as far as my aged eyes can tell are exactly the same as the paint versions of those colors. Plus, they are very close in color to walls with *gasp* actual stucco texture, so I didn't bother with them.) With three railing colors for each stair color, that makes 48 recolors in all. Hooray!

Here are two big pics of the two new rail/fence colors, both to show the rail colors as well as more texture details of the steps. The 16 step colors for each rail color are all exactly the same as the black-rail version above, of course. 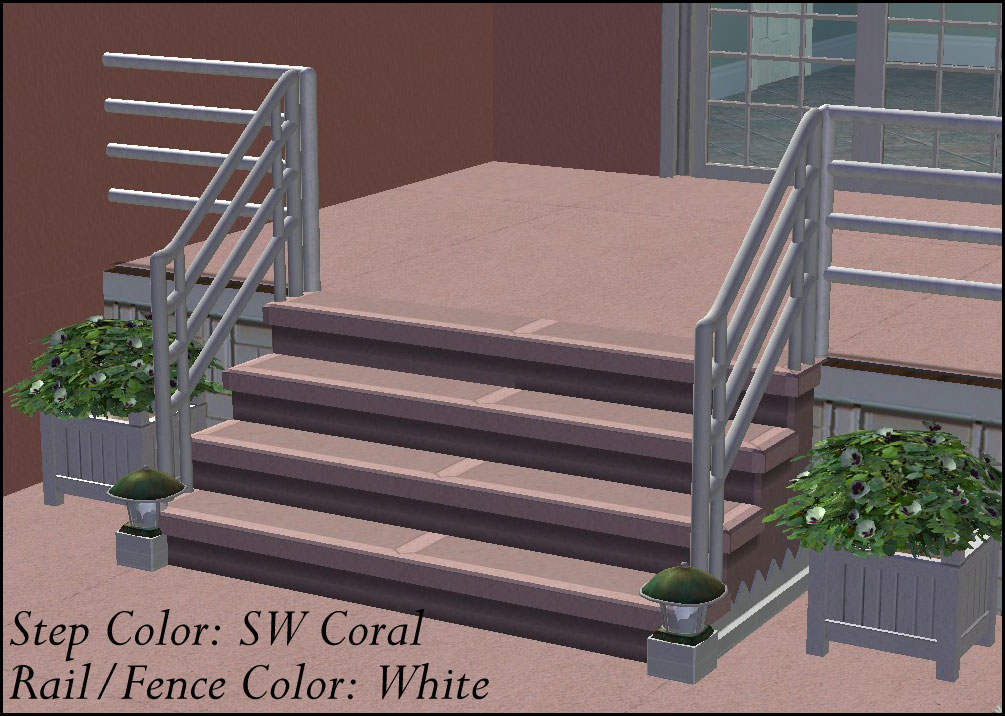 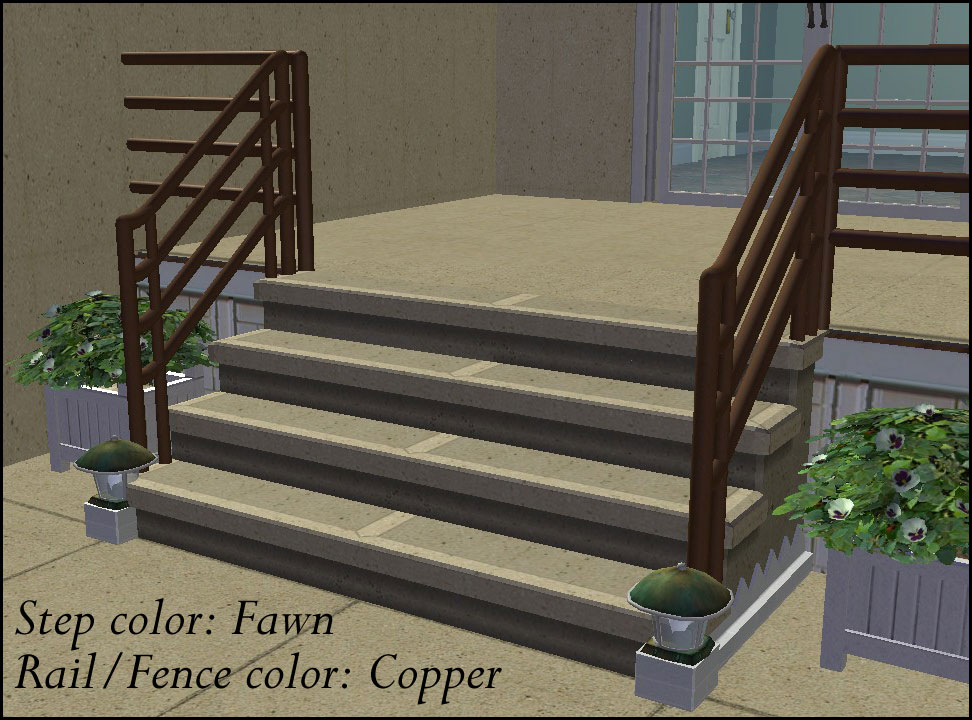 To make this a bit easier on you, so that you can be more selective if you want to be, I'm offering these in three separate downloads. There's one download for the black rail version, one for the white, and one for the copper. For the latter two, the matching fences that I made are also included in the rar file so that you'll have them if you want to use them. (They are recolors of the Balustrade Minimaal, on new GUIDs, so they won't overwrite either the original black or the original red one, but they will add two new fences to your Build catalog.) Of course if you don't already have HugeLunatic's override that makes these stairs recolorable in your game, it won't do you one bit of good to download a bunch of recolors, now will it?

So go get that, if you don't already have it.

Now, do be aware that if you download more than one version of these, when you go to recolor your steps, the railing color doesn't show in the little preview thumbnail, so you won't be able to tell which one is which until you click. But here's a hint: They appear in the recolor popup window alphabetically by file name from right to left. So if you download all three rail versions and don't change the file names, when you go to recolor your steps you'll see three thumbnails of each color. The right-most one will be the black rail version of that color, the middle one will be the copper rail version, and the left-most one will be the white rail version.

Also note that the Adventurous White and Shadow Grey colors don't look all that different from each other when used outside. (Color-wise, that is; they have very different textures if you look closely enough.) However, they do look quite different from each other when used indoors, which I do on occasion in modern and desert/Mediterranean-style buildings. The same holds true for the Cobalt and Calming Blue colors and the Fawn and the Putty colors. If the color similarity bugs you...Blame EA. They made the colors, not me.

I included all of them in order to be OCD/completist. All the files are clearly named, though, so feel free to delete, as you will.

Of course, to be really OCD/completist, you need matching floors, too, in order to create matching concrete/cement walkways and such, such as I've shown in the pics. But I've obviously got you covered there, too. Look for them in a separate upload, which will hopefully, Mods willing, appear at the same time as this one...