Namekian Style Skins and Antennas for Everybody 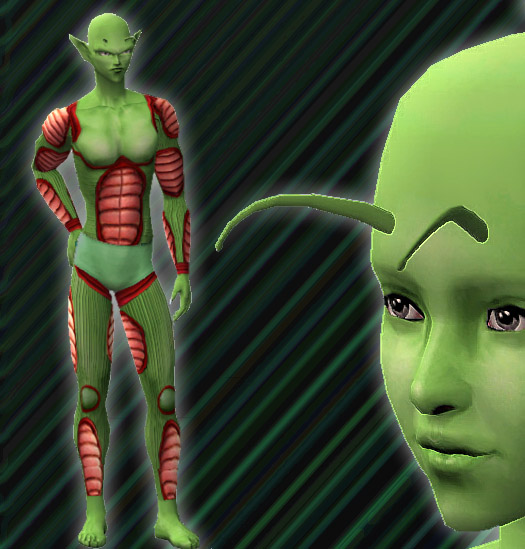 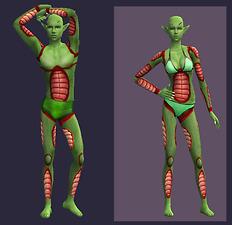 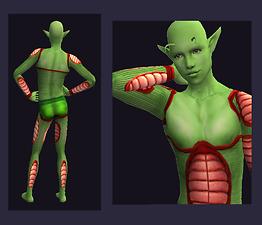 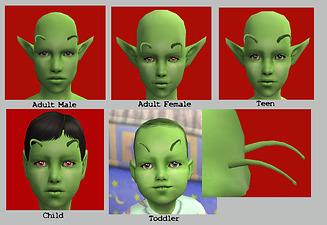 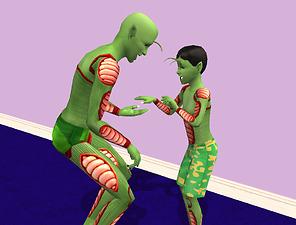 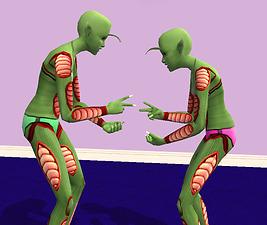 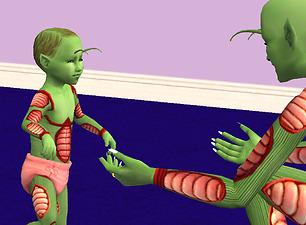 Intro
Namekians (for those who don't know but actually care to discover what they are) is a race from Dragonball Z from the planet Namek (yes... original planet name). They have the ability to stretch their arms at incredible length and regenerate missing limbs. I don't remember if there is any reason why they have antennas though... The species is made up of only phenotypical males, but I think some people won't mind creating female sim versions...

But when I saw a Namek skintone for TS3 on MTS2 which had most of the details done, pink pillow-y muscles and all, I thought it was about time there was a nice TS2 version of a skin tone with such details.

Also I wanted Piccolo to have an improved skin, so if ya already downloaded Piccolo, now you can give 'im a more accurate skin. 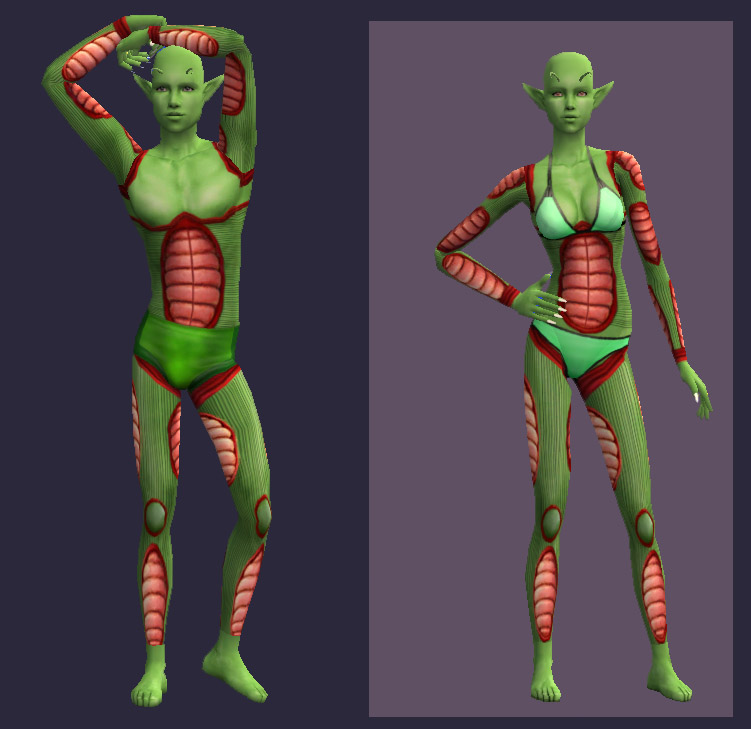 So here it is, two weeks of blood and toil (with breaks in between) editing and re-editing to finally get a decent texture for those pink pillow-like muscles and get those red bands to look correct. I based alot of the details on a shirtless Piccolo figurine that had some parts of his legs revealed. The only thing I didn't get to do was the pink muscle on the side of the shin because the sims shins were too narrow to add it, so I had to compensate for that.

Ren/Louis' self make-up skin is the base for this skintone, all I did was add the details I wanted and change the eye area.

The skin is modified version of Piccolo skin, so it still retains crayonsarefun's showerproof Lean Bodybuilder figure if you choose to download crayonsarefun's skintone linked LBB mesh, but it is not necessary.

But if you want to have the showerproof LBB skintone and have LBB meshes for your buff Namekians, ya'll can find the
- SP LBB Meshes HERE
- LBB Mesh itself HERE
- Clothing for the LLB Mesh HERE or HERE
And you don't necessarily need to only use the LBB, you can have them whatever body type ya like, however to retain the male's muscle-y shape in the shower would still require the SP LBB mesh by crayonsarefun.

This skin is geneticized, available for all ages and both genders (except the infant is just green), with elders having darker green skin. They are 100% "barbie", but not that I choose them to be that way, Namekians appear to not have nipples or those other typical human anatomical features. 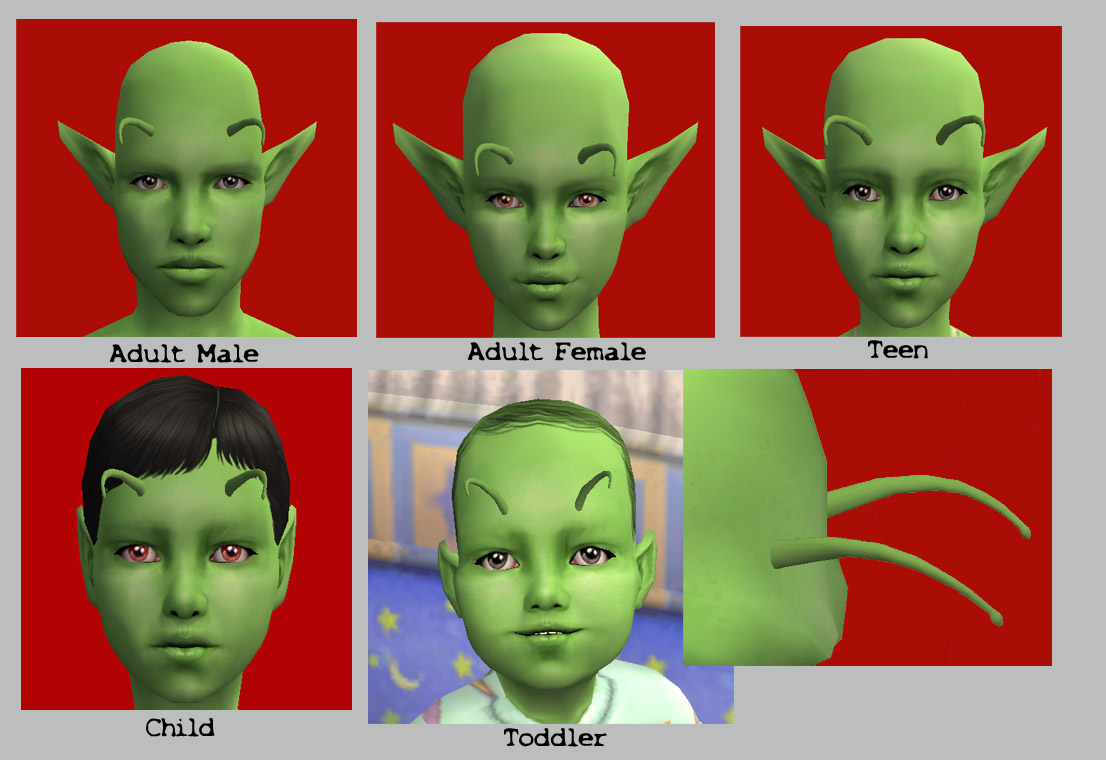 So as you can see, I now have the antennas mesh available for all ages. I thought it was also about time there was a new kind of antennas for aliens and I think these would make nice generic alien antennas.

Other Info
-If you want your Namek sims to have the other details such fangs, long nails, ridges and pointy nose, small eyes, etc., then you can download them from my Piccolo thread (both Piccolo and Diekatze Meshes 2.rar files) HERE
-However if you just want the pointy ears, you can download the default replacement CAS ArchHeart face for both male and female by pentabet HERE

Policy
-Do whatevah ya want with my meshes or recolour to your heart's content, just credit and link me

Additional Credits:
-The pointy ears on the models were modified by GnatGoSplat made available for males by pentabet and the CAS face they were attached to is by Oepu
-The Lean BodyBuilder v2 which can be seen on Piccolo below is created by [Marvine&Beoboxboy] Synapticsims
-The eyes on the models are by Anva
-Cups of Poses by electrodj
-Custom Modeling Poses w/ Overlay Hack by decorgal21572
-Great thanks to all those who have made awesome meshing/accessory tutorials
-Thanks to those responsible for SimPE

June 23, 2013 I think I may be returning to sims 2 this summer, however, I'm just going to play what I want and not focus too much on creating content. If I do make anymore custom content I'll most likely upload them either on my tumblr or GoS.

Just to answer the most common question I receive,

-Long story short, I am currently not taking requests

=+POLICY+=
~No Exchange
~Do not upload Sims to other web/simsites without my permission
~But Absolutely No Paysite for any of my work
~I certainly would love to hear what you have done with my work, but it is not required
~Do whatever ya want with my meshes unless otherwise specified in the post, just credit and link ;)