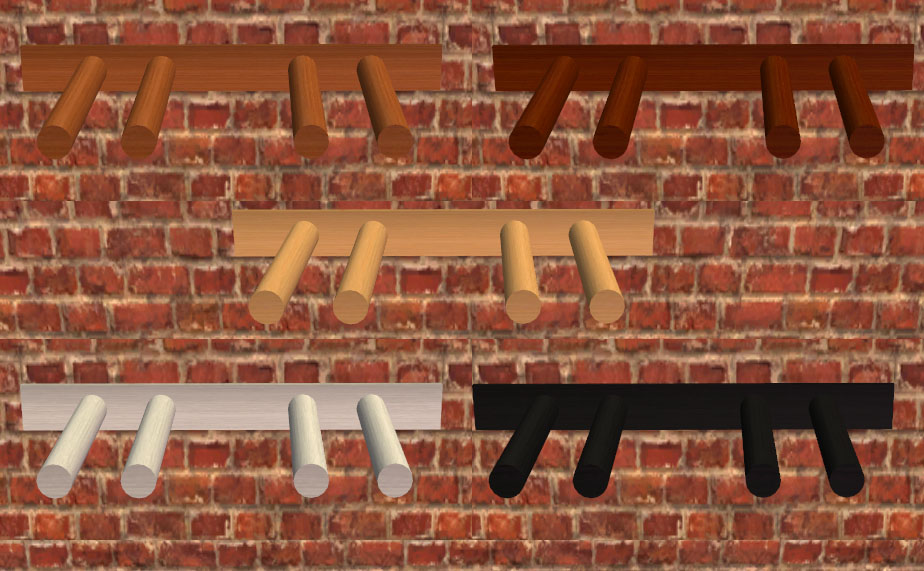 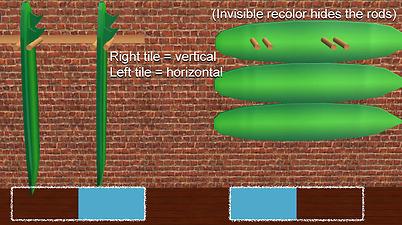 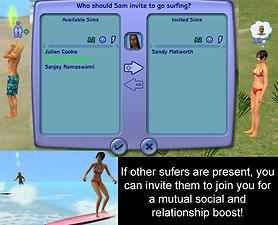 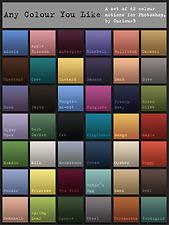 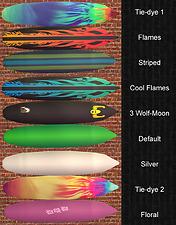 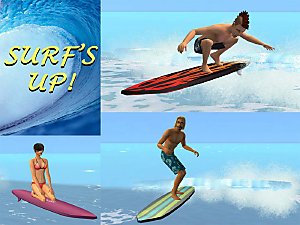 214,173 Downloads 2,990 Thanks  Thanks 602 Favourited 322,119 Views
Featured Upload!   This is a featured upload! It showcases the best talent and creativity available on MTS and in the community. 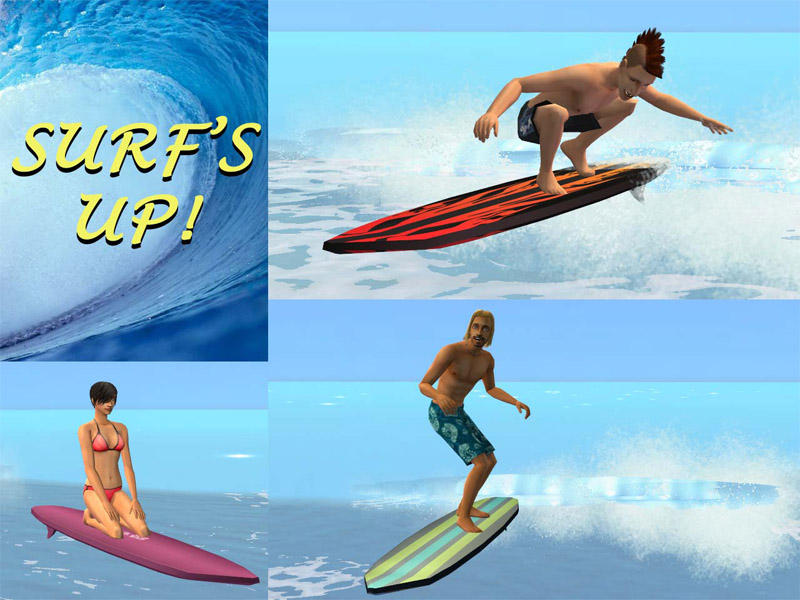 This is a new, socialable self-interaction with a custom queue icon and custom animation. Surfing is available for Sims who are Teens and older (who aren't in the "showing" stages of pregnancy) and who are not Servos.

As you would expect, surfing is only available on beach lots and a Sim must have a surfboard in their inventory. (Surfboards make great gifts, by the way.

) Because I had to make changes to the wave effect object, I made a default override so that all beach lots should be ready for surfing. Bon Voyage is required.

Wipe Outs:
While your Sims don't need to worry about sharks or dangerous coral, Sims can still Wipe Out based upon a sliding scale of their Body skill. That is, a higher body skill will mean a lower chance of Wipe Outs. The probability of Wipe Outs can be edited in the BCONs if you so desire.

How to Surf:
Surfing is a self-interaction; you click on the active Sim and select "Surf." However, if there are other surfers present, you can invite them to join you for a mutual social and relationship boost. While there is no relationship-based requirement/rejection for an invitation, there won't be a relationship boost if the Invited Sim isn't "in the mood" to surf (but that won't necessarily stop the Sim who invited him/her from surfing without him/her). If there are more surfers than there are available waves, would-be surfers will congregate to the side and will cheer on the other surfers until the surfing space they want becomes free. Sims may cheer before they decide to actually enter the water anyway. If you maximize/100% a Sim's body skill while surfing, the custom "surfing" queue icon will appear in the expanded/"full text" version of the 100% Completed Skill memory for that Sim. This is a feature.

Surfers will gain body skill and Fitness hobby.
Also, surfing is fun! Under some circumstances, there is a slight chance that Sims may even show off while surfing.

It's meant to be somewhat rare in the hope that it would show up unexpectedly and give some variety in animations without being obnoxiously omnipresent. (If it's too rare I'll adjust its probability.) 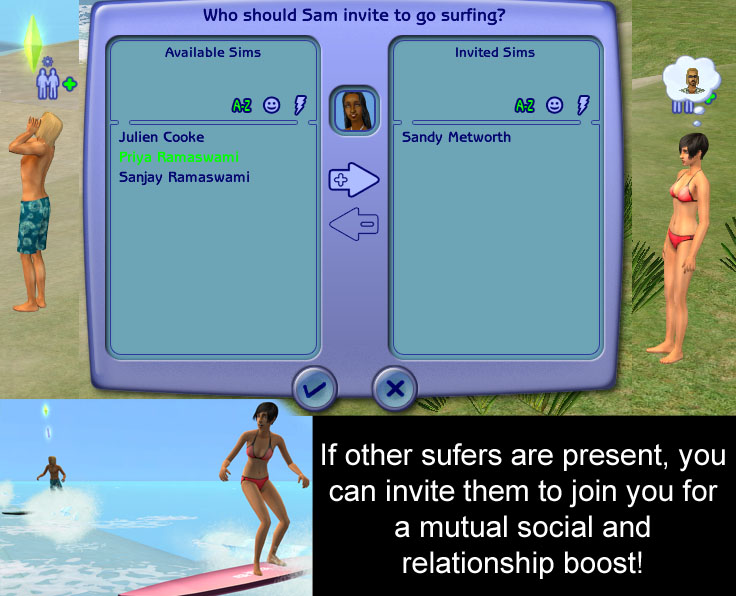 Surf Shops:
Yes, you can sell the surfboards in an OFB shop. It's one reason why I created the surfboard racks. Just be careful to set the actual surfboards for sale and not the rack itself. With SilentLucidity's Angled OMSPs, you can also have surfboards leaning against buildings or fences or sticking out of sand dunes. The surfboard should show up in the neighborhood view.

Videos:
Here are two video clips to demonstrate the surfing (Video One and Video Two). The videos may be a little choppy and, as I will address in more detail shortly, let me say that the interaction is not 100% perfect...

"HELP! I have downloaded everything but I still cannot surf?!"

-Is there a "No Surfing" sign somewhere on the lot? The "No Surfing" sign prohibits surfing on any lot that it is placed.
-Is your Sim already swimming in the ocean or in a pool? The option will not appear on the Active Sim if he/she is currently swimming. Direct the Sim to dry land and the option should reappear provided the above criteria are met.

This interaction is rather complicated (at least for me) and somewhat experimental. I've tried my best to extensively test it, but I can only do so much on my own. Right now the best way to see if it's ready for general consumption (after about a year or so of production) is to go ahead and share it. Please let me know if there are any bugs which aren't Known Issues (be as detailed as possible) or errors (post the error log). If you are uncomfortable downloading this right now, you can wait for any bug reports (although I'm seriously doubtful there would be anything devastating). Should you wish to remove this from your game, make sure there are no Sims surfing before you remove this mod. If you delete this mod and consequently get the appearance of a "Debug Super Duper Hug" interaction, try [Black_Spirit]'s fix, the "LBFRemovesocial" file, to get rid of it. (His "Deadly Neck Bite - Killer Vampires" interaction is not necessary to resolve the issue, just the aforementioned file.)

Known Issues:
-There are occasional timing issues in which the Sim may start surfing too soon, start surfing too late, surf too slowly (i.e. the wave overtakes the Sim), or briefly surf in the wrong direction (which is especially noticeable in the event the Sim performs a delayed or two sequential show-off animations). If someone knows a thing or two about BHAVs, I would love some advice on how to correct this. I've been content with the timing being an approximation, but perfection would be ideal if possible.
-Sometimes the timing of the splash sound effect on the paddling animation is a bit off.
-Possibly obsolete issue: Some time ago, I would occasionally find waves becoming stuck "in use". This doesn't seem to be a problem for me anymore. However, I have created a debug interaction to combat this on the surfboard racks should the issue reappear. The interaction is on the racks because you can't really click on the wave effect object. You must have debug mode enabled and must shift-click on a rack. The interaction will delete any surfing NPCs on the lot and clear the "In Use" flag for all wave objects after you confirm that this is what you want to do. If you use this debug interaction while any Sims are surfing, it WILL delete the Sims currently surfing. There is a prompt reminding you of this before it actually does anything so that you can back out of it if you want.
-

June 13th: There seems to be a conflict with Inge's buyable beach portal(s) which causes an error. I promise I will be looking into a solution, ASAP (I've got so much work to do for Real Life at the moment so my progress with this is slow). For the time being, please remove Inge's buyable beach portal before going surfing. If you use the Portal Revealer, make sure the portals have returned to an invisible state before surfing. (Thanks to keef1973 for pointing out this issue.)

-Echo: For the surfboard mesh, which is far superior to my attempts, as well as her help and tutorials. None of this would be possible without you.
-Inge Jones: For her portal revealer which was so vital in helping me figure out what to do with the ocean.
-CuriousB (Bagfran at LJ): For her macro (link). Beautiful colors!
-Leesester: Whose Emptied Bookshelf became the base for my cart object. I needed a lot of slots to work with and to play with; the bookshelf had plenty and was ideal for my purposes. (Before I started stripping away most of bookshelf, its size and height also made a great beacon/marker to let me know where the NPC was currently located. While humorous to see someone surf with an empty bookshelf, it truly was a godsend.)
-Anyone else who has helped but whose name escapes me now.
Other Information

MAB-2000's Hawaiian Recolors
Back to top

THANK YOU
I would like to thank all those who have inspired and helped. Sometimes the greatest and most profound joy was not found in the actual process of custom content creation or learning how to do something new....it was found in the help, patience and kindness of complete strangers from all over the world, even for something as relatively trivial Sim custom content. EA made the game but you made it really worth something.

Thanks goes to everyone who makes this site and the Sims' world a better place.


Policy
You are free to modify my work, borrow from it, fix it, and/or expand upon it with credit. I'd be really interested in seeing what people might make with it, so feel free to send me a link. :) Please give credit where credit is due and please don't charge for it (or otherwise hold content hostage).

I not am taking any requests at this time, sorry. :(