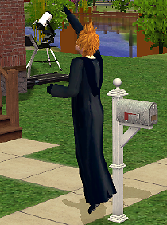 Hey there. This is my first upload to this site, I hope it goes over well. I've been using the Nobody career and major on here and it suddenly occurred to me...there was no companion career for characters like Roxas or Xion for when they're teens (what other age would they be?). So I got to searching around and found out how to make my own career and here is the fruits of my labors! This took me awhile to do and I tested it out and it's great. Couldn't figure out how to properly make the game say the Sims name in the career pop-ups, but I'll learn eventually...anyways, I should shut up and get to the important stuff now.


Level 1: Newborn Nobody
You are found by Master Xemnas and given a new name. Under the wing of Axel, you are tasked with small, minor jobs revolving around helping Demyx fix his sitar or doing everyone's laundry. Maybe if you build your skills up, you might actually get to go on missions.
Pay: $75
Hours: 5-8
Days: Mon-Fri

Level 2: Nobody in training
You follow each of your fellow Nobodies around. They each teach you something different that you take into your own style. The training is physically demanding but worth it. Build up your body skill to get into shape for what's in store for you.
Pay: $125
Hours: 5-9
Days: Fri-Tue

Level 3: Nobody on a mission
Xemnas orders you to follow the commands of Saix, the mission leader. He sends you to different worlds in search of heartless to kill and capture their hearts. The work is tiring, but worth it. With each passing day, you please Xemnas more and more. Maybe some day you will have a heart of your own.
Pay: $175
Hours: 4-9
Days: Wed-Sun

Level 4: Nobody with a purpose
You've finally found your place in the fold and unlocked your unique powers. Now that you're fully capable of handling yourself, Xemnas has requested that you go on a few missions solo. Think you can handle it? Don't give up now!
Pay: $225
Hours: 3-7
Days: Sun-Thur

Level 5: Nobody with power
You've done it. You are now an equal Nobody, which means no more getting pushed around anymore. It's smooth sailing from here, just make sure nothing happens to you or you will never hear the end of it. Your friends have helped you become powerful and Xemnas regards you highly. Nothing can break you out of this new sense of accomplishment.
Pay: $275
Hours: 4-7
Days: Thur-Mon

Note: this is NOT linked to the Adult Nobody career, so you will have to re-hire your sim into the adult version when he/she ages. Also, the chance cards have a 45% chance of showing up during a shift.

Caution: Do not attempt to use both versions at once, they will overwrite eachother!

Additional Credits: SimPE and Bidou for making the wonderful programs that helped me make this.
Zexion577568 for making the adult career, major, and the icons. Kingdom Hearts Nobody Career