Raon 2 and Raon 4 in GIMP versions of pooklet colors 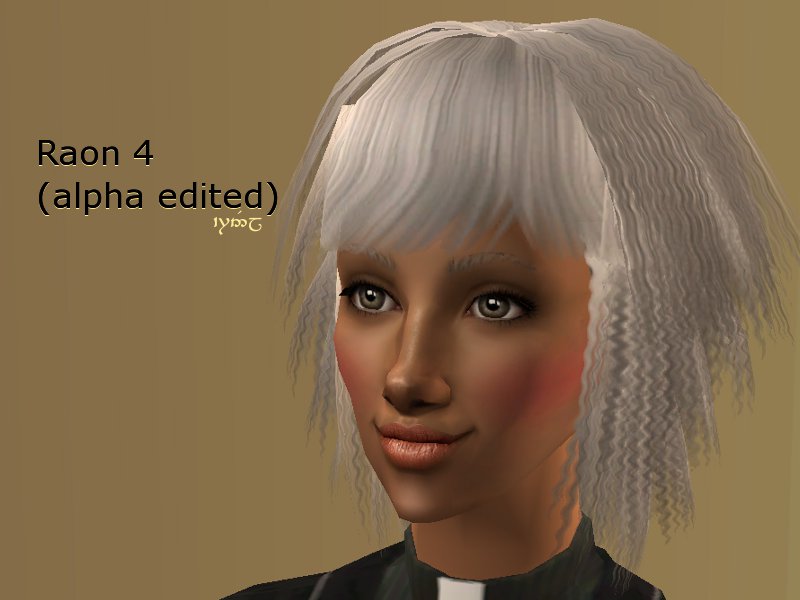 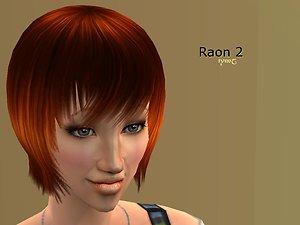 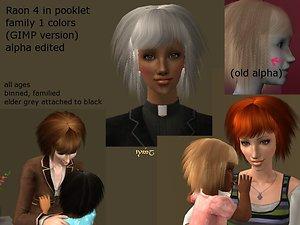 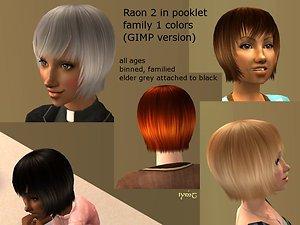 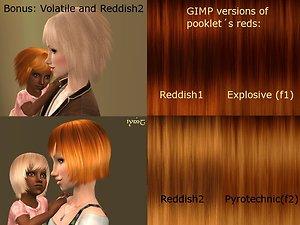 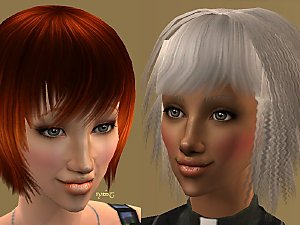 Created by AranelS
View Policy / About Me View all Downloads
Uploaded: 25th Jan 2012 at 10:58 PM
Because it's snowing and I can't drive anywhere until it stops, I spent the whole morning working on these and forgot to eat lunch.

Because I have a thing for low-poly hair meshes, I've been working on older meshes, trying to find ones that nobody has updated. So, here are some of the very earliest Raon female hairs, Raon 2 and Raon 4, each in the six colors I use in my game. Both use GIMPified versions of pooklet's colors (family 1 and two from family 2) and version 2 textures. The four colors from family 1 are familied; the two additional colors are not, but they ARE binned, so they will show up in the right place.

Raon 2 is a very simple little thing, but it's very nicely animated and I'm especially pleased with how the retexture came out with this mesh. The mesh has 1826 faces. 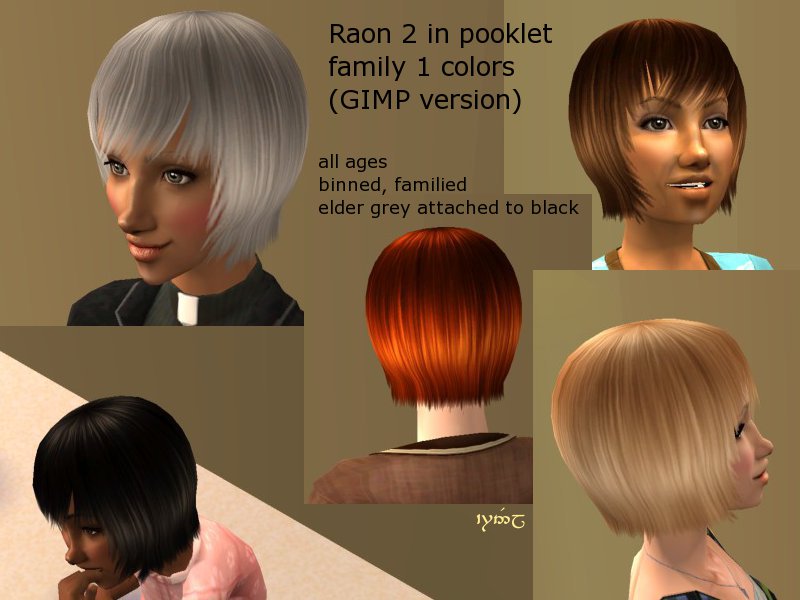 Here you see my elder grey, pooklet's Depth Charge (brown), pooklet's Incendiary (blonde), pooklet's Dynamite (black), and my Reddish1 (see below for explanation of my GIMPed colors). These four colors, with the elder grey attached to the black (Dynamite), are binned and familied together. As you can see, they work for all ages.

Raon 4 is a bit of a frizz-fest, but I love the playfulness of the randomly curly back parts. I edited the alpha to remove some weird bits that show along the face. There is a similar thing going on with the top pieces in the front, but those bits are not as noticeable against hair as against skin and difficult to remove due to the way the texture is mapped to the mesh. The mesh has 5478 faces. 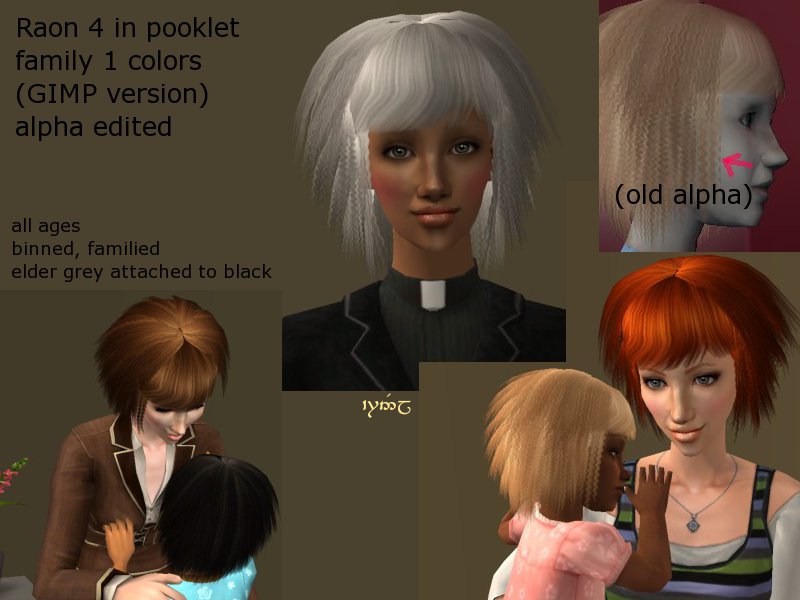 Same four colors as above (+grey); also works for all ages. (See the image below for the other colors and ages.) I included a shot of the hair with the original alpha, which happens to be using the Volatile (light blonde) recolor.

GIMP Colors
Because I have GIMP and not photoshop, the colors are not EXACTLY the same as pooklet's. Dynamite (black), Depth Charge (brown), and Incendiary (blonde) from family 1 are pretty consistent--they are all based on pooklet's written descriptions, since GIMP doesn't run photoshop color actions. It turns out that maybe 2/3 of pooklet's colors can be done in this way, and the results are quite good.

The reds and greys are tricky because they use a mode that is unavailable in GIMP, so I came up with my own version of Explosive (red) and Pyrotechnic (light red), which I have creatively named "Reddish1 (red)" and "Reddish2 (light red)" because they are...kind of like the reds in family 1 and family 2. I included a comparison of the texture files in pooklet's colors and mine, so that you can see if it's a close enough fit for you if you like your colors to match. I make no attempt whatsoever to match the elder grey to anything, because I like a little variety in my elder hair (and they all end up practically the same anyway).

I have included additional recolors of each hair, in my Reddish 2 (light red) and pooklet's Volatile (light blonde). They are binned but not familied--each has the elder grey attached.

Since this the first custom content I've thought was worth uploading, I thought it would be fun to include my very first custom content in the screen shots, in the form of grandma's outfit, which is an extremely basic recolor of a Maxis outfit that I needed so desperately that I took desperate action.

Resources:
Hair binner, pooklet colors (written version) and textures, GIMP, SimPE
This is a new mesh recolour, and means that you will need to download the particular mesh itself in order for this to show up in your game. See the Meshes Needed section or read the text for more information.
Files Need help with downloading or installing content? Click here!

This download requires one or more meshes to work properly. Please check the Description tab for information about the meshes needed, then download them below:
Also Thanked - Users who thanked this download also thanked:
Nouk - Long wavy Hair for ladies of all ages
by Nouk
*Short curly hair*-F
by lidiqnata
-Sizz- New mesh hair 'Hanui'
by sizz
Nouk - Jessica Hair: Long wavy low ponytail for the sim ladies!
by Nouk
MeanScene - SAU No.18 Recolors + Mesh
by SaydeSim
Raon 15 and 17 in GIMP versions of pooklet's colors
by AranelS
'Jock Boy' Anto 55 Re-Texture + Re-Alpha
by Yoshitasu
-Sizz-New mesh hair 'Pungback'
by sizz
Retexture of Coolsims Hair 84
by Caiza
~ By Request ~ CoolSims #72 ~ NV 9.0 ~
by Sadi Kalen
Packs Needed
None, this is Sims 2 base game compatible!
Other Information
Hair Style:

Since I have gotten so much enjoyment out of free custom content, I finally decided to share some of my dabblings in order to, in some small way, give a little bit back to the community.

Since all I make is free stuff made with other free stuff (except for the games, half of which I bought used, I am not even using any not-free software--hooray for the GIMP!), and it is made possibly entirely by other people who have shared THEIR free stuff, I am entirely sharing-friendly. Do whatever you like with any of my stuff. Make recolors, pull it apart and make it better, mix it with your own stuff, upload it with your Sims or lots or whatever, or print it out and use it as a background on your dart board.

In order to make sharing easier, crediting me is nice, but not required. If you forget where you got it, 'er...someone somewhere' is acceptable credit. (Basically, anything short of claiming to have made it yourself.)

I would prefer that you not put anything made with my stuff on pay sites, because I figure if I make free stuff using other free stuff, it should stay free. Obviously you should never try to make money off of somebody else's stuff, but as for just posting for free on sites that have some pay content...since I don't actually frequent any pay sites, I wouldn't know if you did. Use your best judgment.