No Cowboy/Cowgirl Outfit When Riding The Mechanical Bull 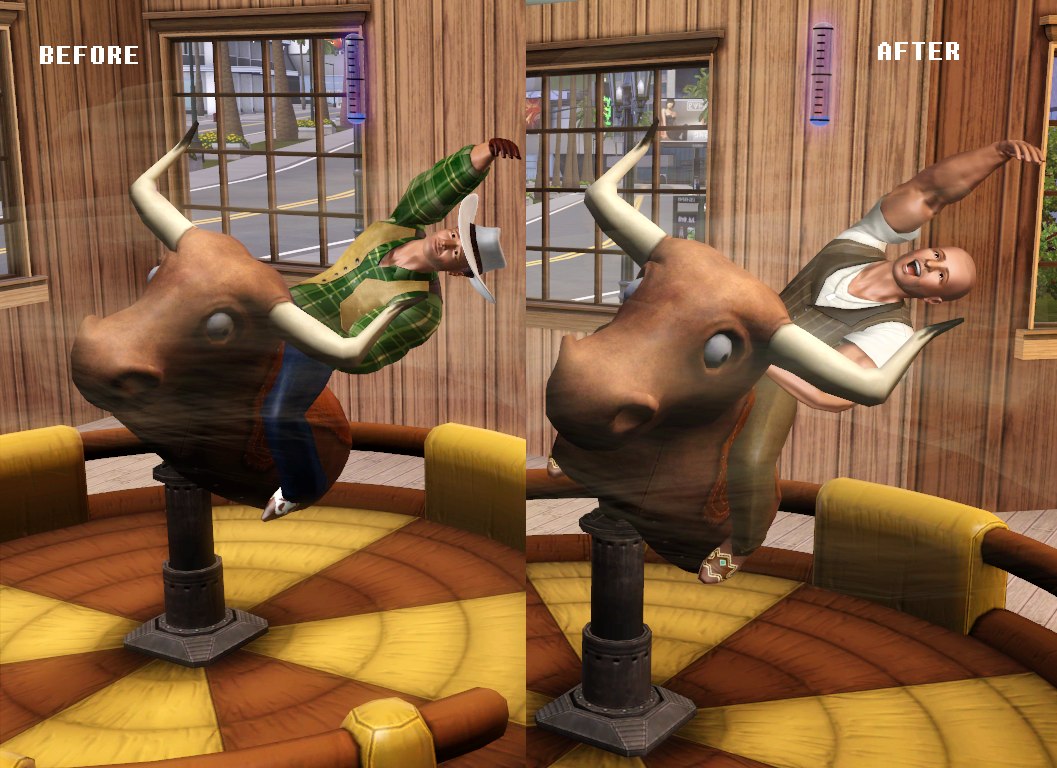 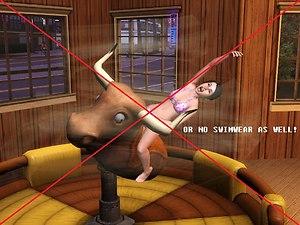 NoSwimwear2ndOption.jpg - width=1024 height=768
No Swimwear as well for 2nd mod option for Dramatic or Inappropriate Sims

This is a tuning mod that disables Sims with an Athletic Skill Level of 7 or higher from being forced into changing into a Cowboy/Girl outfit when riding the Mechanical Bull. There are two versions of this mod to suit your preferences:

NoCowboyOutfitWhenRidingMechanicalBull - Disables Sims from changing into a Cowboy/Cowgirl outfit when Athletic Skill is at Level 7 or higher; or

NoCowboyOutfit&NoSwimwearWhenRidingMechanicalBull - Disables Sims from changing into a Cowboy/Cowgirl outfit when Athletic Skill is at Level 7 or higher AND eliminates the chance of Sims with the Dramatic or Inappropriate traits changing into Swimwear entirely.

What Is Wrong With The Cowboy Outfit/What Is The Point Of This Mod Exactly?

There are three reasons why I created this mod. Firstly, the Cowboy/Cowgirl outfit is great and all, but what about the players that don't want their Active Sims in Cowboy/Cowgirl attire when riding the Mechanical and would prefer the choice of choosing their own outfits for their Sims when riding the Mechanical Bull? This isn't possible by default and is problematic when a player wants to play out a particular scenario in-game which can only be done effectively with a certain look/choice of clothes. Secondly, in practice, unless you are actually riding the Mechanical Bull at a professional/competitive level, you ordinarily would not get changed in Cowboy/Cowgirl specific attire just to ride a Mechanical Bull. Finally, the actual interaction itself runs smoother without having that akward pause between initiating the interaction and the playing of the interaction itself where the change clothes spin normally occurs, which is particularly important if you want to run the interaction mulitple times successively. In short, it's something I found a bother in my game and have chosen to share with others who may also feel the same way regarding the Mechanical Bull in Showtime.

This mod was made with the latest 1.32 Patch/Showtime but in order to get proper use out of this mod, you will need to have the Showtime Expansion installed so that you can actually buy and/or ride the Mechanical Bull. If you do not have Showtime installed, this mod will be useless.

This mod edits the MechanicalBull XML file and will conflict with any other mod that edits the same XML file.

Additional Credits:
Nonamena for the reply in the thread concerning this mod, S3PE & its developers and MTS for hosting this upload.
Other Information