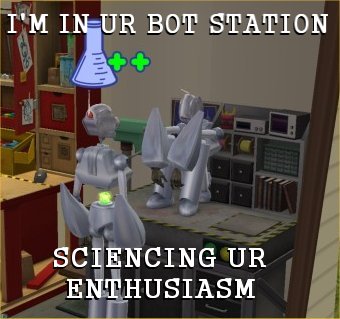 Created by Neder
View Policy / About Me View all Downloads
Uploaded: 15th May 2012 at 3:37 AM
Updated: 21st May 2012 at 2:58 AM
In Freetime, they should have just called the "science" hobby "telescope enthusiast" and had done with.
I know that there are a few other things for Sim Science geeks to do- but nothing cool. Seriously, I'm supposed to watch my Sims watch ants?
Clearly, hobby-based gameplay is biased towards art and music.

With this little tweak, Sims using the robot crafting station will gain enthusiasm in SCIENCE, not tinkering (I mean tinkerers get to build a freaking musclecar!) and all will be right with the world.

As a concession, I also modified the toy crafting bench to throw the tinkerers a bone.
(Now art enthusiasts will have to be satisfied with "just" painting, pottery, sewing and flower arranging.)

Update 05/18/2012
At the suggestion of Sophie-David and DutchxFan, I went ahead and created the files necessary to mod Flower Arranging to Nature enthusiasm.

Update 05/20/2012
Due to an oversight, all files that affected the flower arranging station also affected the sewing machine (and I would assume the pottery bench as well).
This has been corrected, so please redownload those files if you had previously.
Thanks to Rinalin for catching the error.

The robot and tinkering only files do not need to be redownloaded.

All three crafting benches use the same BHAV for enthusiasm, so these values can't be adjusted in a modular fashion. I realized that some folks may want to affect robots and not tinkering or vice-versa, so there are 7 files (relatively clearly labelled) in the download.

Otherwise only the last to load alphabetically will apply.

Additional Credits:
Thanks to the creators and supporters of SimPE as well as the Sims2 community who continues to play and create.
Files Need help with downloading or installing content? Click here!

– Global Mods : Mods that change the way the game works without requiring any user intervention.
Tags