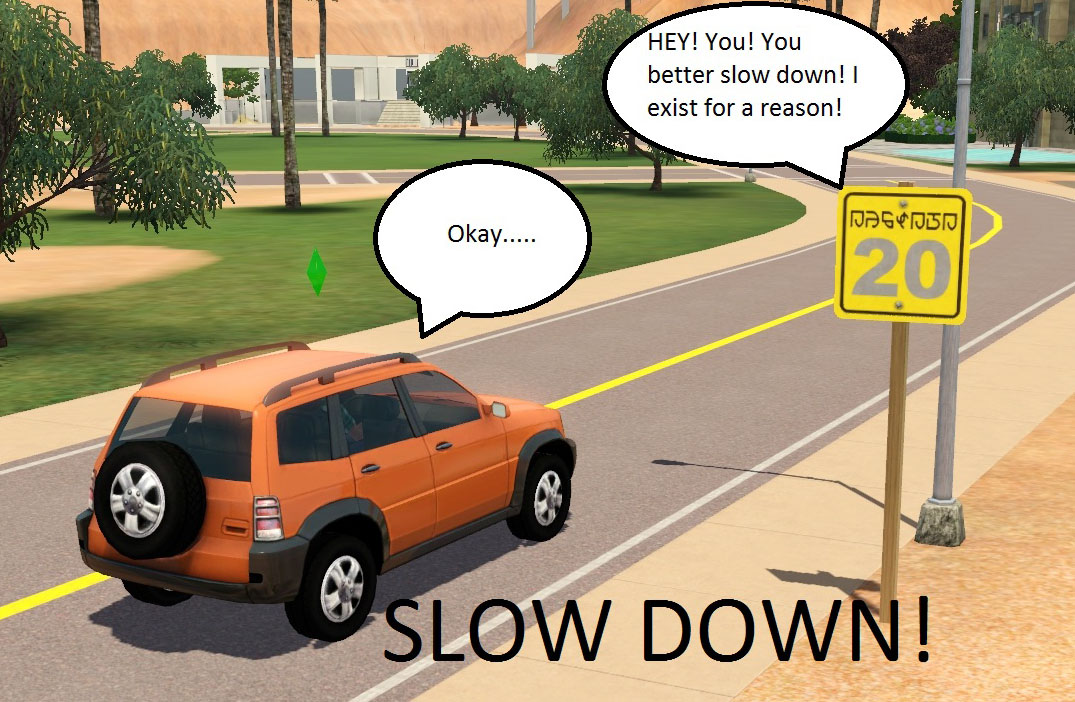 Created by JSimmer View Policy / About Me View all Downloads

What does this mod do? it Slows down all vehicles (exculding a few, more details below) to a realistic speed in game.

This Mod DOES work with base game along with expansions, including FLS. And works with patch 1.36


I was highly disappointed at how fast all the cars go! And I noticed there were speed limit signs with the number '20' SO... I made all the cars obey that speed! (J.K. The cars go 25 :O Such criminals!)

When I first attempted to upload this MTS rejected it because ALL the cars went the same speed, therefore making the cars un-unique. But the point of this mod is to make ALL cars drive at realistic speeds, so here's what I did:

All cars go 25 meters per second/sim minute. But MTS was right, that makes every car un-unique. So I changed the acceleration, so now most cars accelerate at 15 meters per second/sim minute. but the more expensive, faster, oh wait, excuse me, USED-to-be-, faster cars accelerate quicker, not going faster, but getting to the top speed faster. I find this realistic because I'm pretty sure a brand new 2012 car coulld get to 25 mph faster than a 1980 car could.

If you would like to see how fast the cars go beforehand, Click here! (Sim goes from Beach in Appaloosa Plains, to Home, near Cat Park)

This mod affects Service vehicles also, not Emergency vehicles. Only service NPC vehicles, including the Limo. (example: maid van, handyman truck, repoman, etc) But it does NOT slow down Police cars, Fire trucks, or ambulances


This mod Overrides all XML files for cars. Including Fast Lane stuff cars, and may conflict with any mod editing the same files
The following files are edited:

Listed below are the types of cars NOT edited by this mod: (Not the XML files)
I highly recommend downloading all 3 files (Cars, Taxis and Bikes) because otherwise every single taxi will pass through cars

This is the Base game version NonFLS - only effects Base-Game Vehicles, not Fast lane cars, So download that if you Do NOT have Fast Lane stuff installed, or just don't want fast lane cars effected

Cars - effects both Base Game AND Fast Lane cars

Bikes - slows down the bikes (kid and adult, also the automatic bikes that kids get out of nowhere)