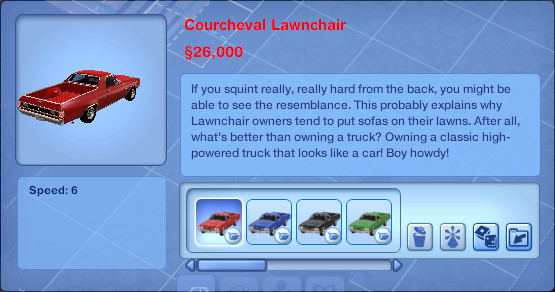 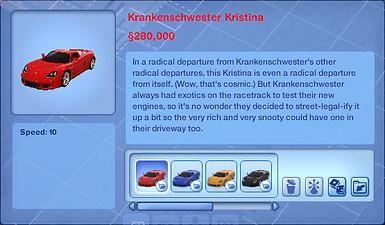 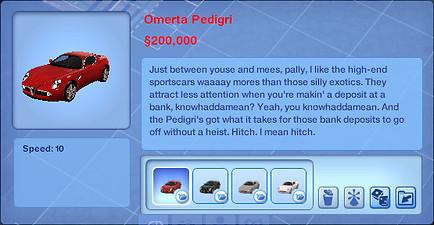 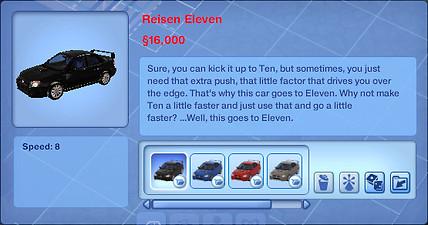 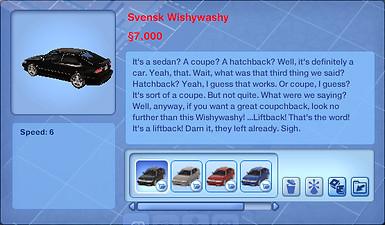 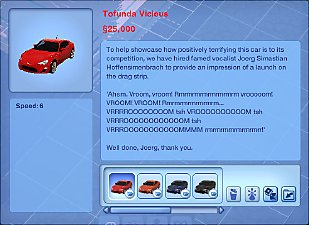 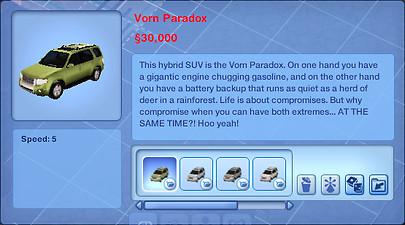 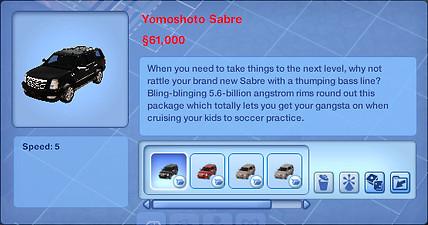 356 Thanks  Thanks     67 Favourited
The 'Positioning Statement' Section

Fresh Prince's vehicles are just plainly awesome. As a lover of fine vehicles (I have since learned not to use the terms "autophile" or "automobilophile", since they carry certain other inaccurate connotations), having all of those cars in The Sims 3 to fill out that tiny catalog is spectacular, even if the complete collection is a smidgeon heavy on the luxury and sport badges. But of course, they fit perfectly into The Sims 3, right?

What we really have is humorous fictional vehicles interspersed with a large influx of realistic, high polygon real world vehicles with authentic badging and descriptions. Something's gotta give... I'm happy to say the descriptions are it!

Wow, good job, Sims Studio! Right? Well, no. That's actually Fresh Prince's 1972 Plymouth Fury, but with a swanky new name and description. Splenderiffic! (It's a word. "...Is it a real word?" So many questions!)

This is a custom STBL (string table) override mod containing custom, homemade vehicle descriptions (in English only!) for every Fresh Prince vehicle. Using the string table override method by using a GUID with a higher priority, these descriptions overwrite all of the descriptions of Fresh Prince's vehicles as soon as they're loaded in the game. Don't worry, you don't need them all -- download one, two, ten, or two hundred and twenty two of Fresh Prince's vehicles: regardless of how many you've downloaded, each one will have its new description well and proper, provided of course the mod packages are installed properly!

Just to be abundantly clear, no content from any of Fresh Prince's vehicles is included with this download -- this provides descriptions only. You will still need to download the vehicles you want from Fresh Prince's website.

All cars are categorised and described according to research into their real world counterparts (assuming I wasn't already intimately familiar with the car), albeit "zhushed up" a bit and influenced by various prejudices and modern social commentary for humorous effect. All models are assigned to fictional automakers that already exist in The Sims 3 world, or are given completely new automakers, and all are consistent with actual corporate relations of the real world automotive industry -- for instance, did you know that BMW owns Mini? If I did my job right, it should be impossible by description alone to distinguish vehicles from EA versus vehicles added by Fresh Prince.

Note: The Sims 3 is rated T for Teen by the ESRB, and thus I assume there's a certain level of maturity involved in any player. Some of my descriptions contain stereotypes and mild themes that may be unsuitable for children 12 years of age or under. Nothing vulgar or terrible, of course. ;-)

The 'What In Tarnation Is That' Section

Vehicles showcased in the screenshots below are as follows:

Many thanks to Fresh Prince for his heartfelt and generous permission for creating this mod!

Note that Fresh Prince occasionally re-releases some of his vehicles if they have glitches or technical inconsistencies, so if you note that a description in this mod is "falling through" to Fresh Prince's original description, make sure you're using the latest copy of the vehicle in question!

All vehicles up to the 31st of December 2014 have been given descriptions. Of course, if Fresh Prince releases a new vehicle, no new description will exist until I write one and upload a new version of this mod. I will try to keep on top of Fresh Prince vehicle updates at least monthly, but if there's a new Fresh Prince vehicle hot off the presses and you're just dying to see what sorts of things I write about it, or if there's a missing description or other technical inconsistency that hasn't been solved by downloading the latest version of the car in question, feel free to send me a Private Message or post a reply on the Comments thread.

This mod is in English only and is likely to remain that way. I don't think anyone would be willing to invest the effort on translating this into other languages, given that there are quite nearly 10 000 words to translate... and even if it were translated, much of the idiomatic expression and social issues peculiar to the English-speaking world could be lost in translation.

Note: This mod will always be compatible with all future versions of The Sims 3. It was built with patch 1.42 but should be compatible from 1.00 all the way up to infinity. (This is because the STBL format has not changed in any way since the release of The Sims 3 and is highly unlikely to do so in the future. I will feel free to ignore any requests for patch compatibility updates. ;-))

See: Game Help:TS3 CC Basicswiki for a full guide!
Back to download view
51 Comments / Replies (Who?)