No Romantic Interest On Kiss (1.67 compatible) 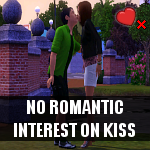 28,669 Downloads 846 Thanks  Thanks 236 Favourited 91,821 Views
Picked Upload!   This is a picked upload! It showcases some of the best talent and creativity available on MTS and in the community.

Compatibility
The tuning is based on the XMLs from patch 1.67. Lower patch levels *may* work, but it's better if you edit your XML manually in that case (see Install Instructions).

The UL and ITF tuning files will have no effect if you do not have the corresponding EP installed, of course.

About the mod
Ever got tired with how kissing locked Sims into a romantic relationship? Maybe your storytelling calls for Sims to have a first kiss that doesn't lead into a relationship, perhaps your Sims are being hamstrung by the romantic reputation system for getting into unwanted relationships, or you're simply fed up with that Inappropriate sim laying one on your sims whenever you aren't watching them.

Into the Future added its own set of kiss interactions, although only one actually changes the relationship between sims:It's a mystery why the other kisses do not change the relationship, but as I haven't seen them used yet, perhaps there is some contextual reason why they don't.

ConflictsNote that you CAN use all of these files at once, as they modify different resources.

'What did the world creator say to the sculpt tool?'

'Nothing, he just punched it in the stomach instead!'