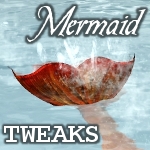 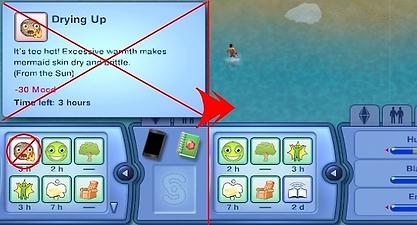 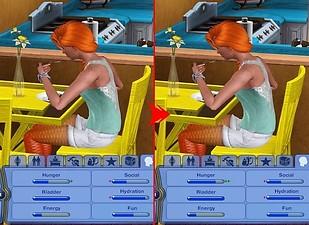 17,155 Downloads 607 Thanks  Thanks 218 Favourited 69,148 Views
Picked Upload!   This is a picked upload! It showcases some of the best talent and creativity available on MTS and in the community.
Personal Picked Upload! This is a personal favourite of the creator!

Created by Caitie
View all Downloads
Uploaded: 9th Jul 2013 at 9:36 AM
Updated: 9th Jul 2013 at 2:11 AM
I love mermaids. They're just awesome. So, when I found out that the supernatural Sim in Island Paradise was going to be a mermaid, I was very excited. And, for the most part, I haven't been disappointed. They are quite a lot of fun to play with, the transition from legs to fin and back again is perfectly smooth and looks great, and I even like how you can tell a mermaid from a normal Sim even in human form by their scaly legs. But, there are a few things I was less-than-impressed with. So I taught myself to mod and tweaked them.

This mod will change how your mermaid is satisfied by "normal" food and/or if they get the "Drying Up" negative moodlet. Details to follow:

2. The "Drying Up" Moodlet
When the temperature gets above 90°F (or whatever it is in Celsius) mermaids get a negative moodlet called "Drying Up". The logic is something along the line of how the sun dries up sensitive mermaid skin. It lasts while they're outside, and then for three hours after they cool down. Um, excuse me, but isn't outside kind of a mermaid's natural habitat? At least to me, it makes no sense that their skin would be sensitive to sun, or rain, or anything else. So I've changed it so that mermaids don't receive the "Drying Up" moodlet from the sun. They will still receive it from standing too close to a fireplace, because that does make sense.

This mod requires Island Paradise. MTS doesn't have an IP category yet, so I have to put it here. Although why you would want it without IP, I don't know.

The different flavors conflict with one another. Only download one flavor! That's why there's so many, so you can choose the combo you want.

This mod, in whatever flavor you choose, changes the "OccultMermaid" XML file. It will conflict with any other mod that alters that file. If unsure, use Delphy's Dashboard Tool to check for conflicts.
Other Information