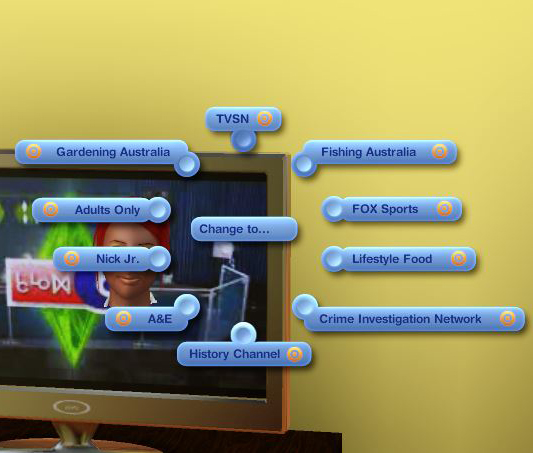 What is this? What does it do?
This is a simple STBL mod that renames the in-game TV Channels to use the names of Australian Pay TV channels with similar content.
All of the names were taken from a Foxtel/Austar TV guide, with the exception of Gardening Australia and Fishing Australia - they take their names from shows instead of channels.
For English games.

The weather channel is not included in this - it retains its usual name of 'Weather'.

Compatibility:
Tested and confirmed compatibility with patch 1.63 through to 1.67. Should only conflict with other mods which alter the TV channel names.

I did make this on a previous patch version and in theory it should be backwards compatible, however I don't recall which patch it was first made with so I will not explicitly say that it is compatible with any older patches - just that it more than likely would be.
Other Information

Policy:
Work may not be redistributed, uploaded to another website, modified and then uploaded or claimed as your own. Action will be taken against violations.