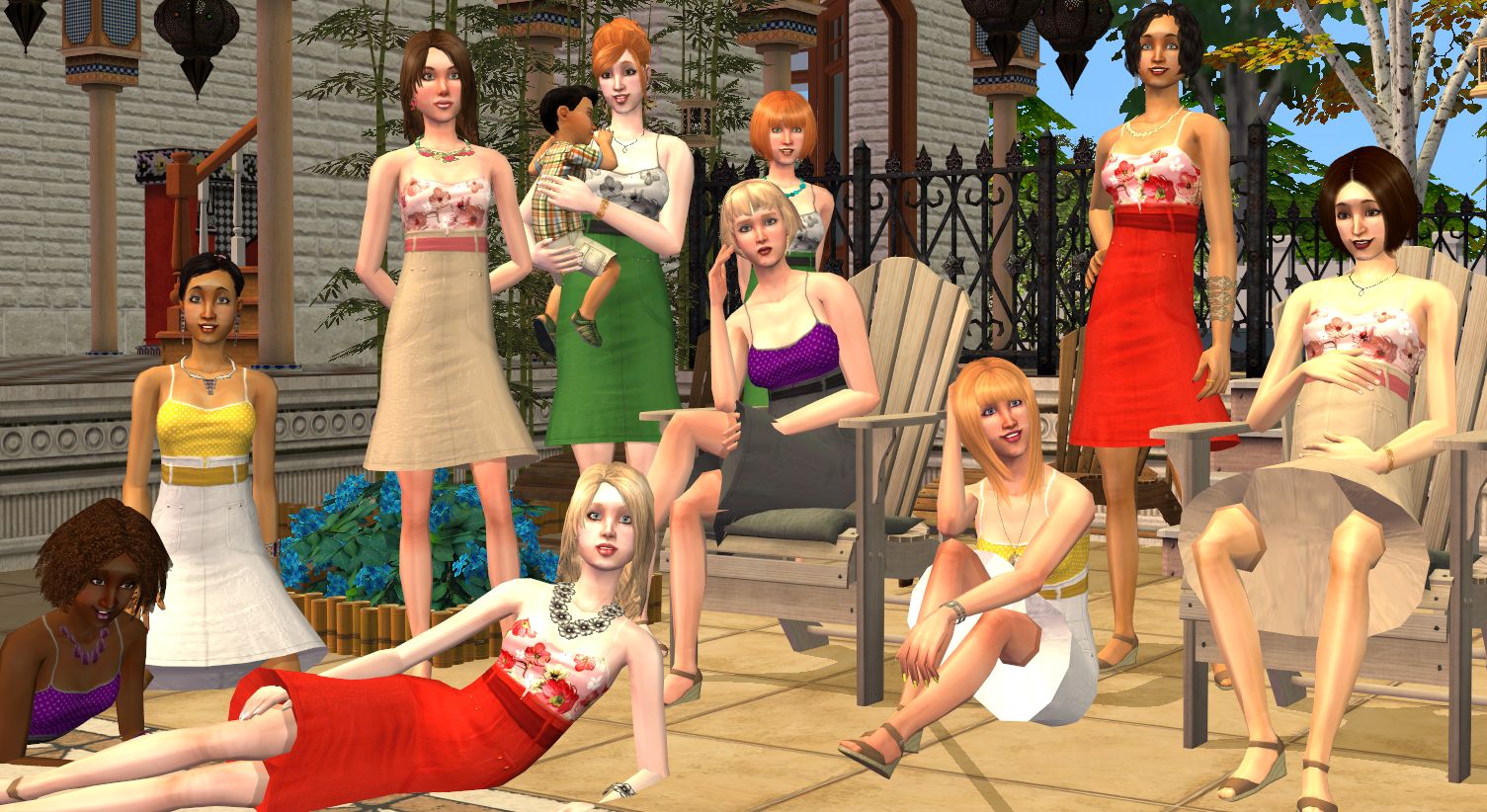 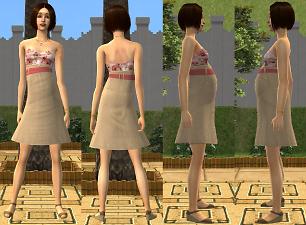 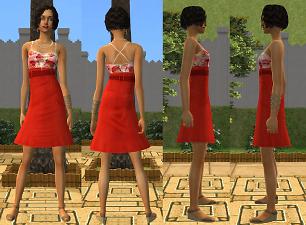 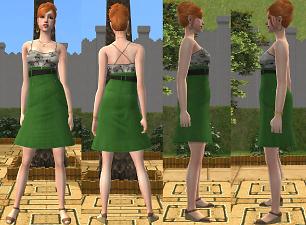 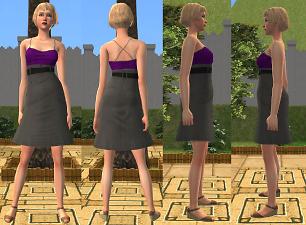 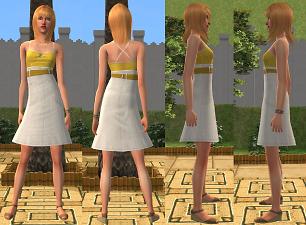 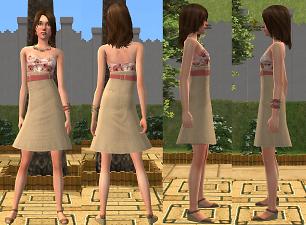 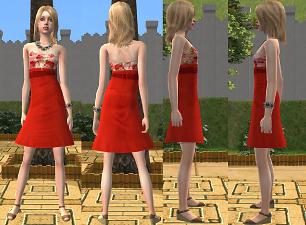 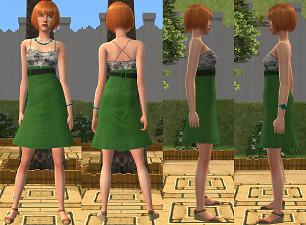 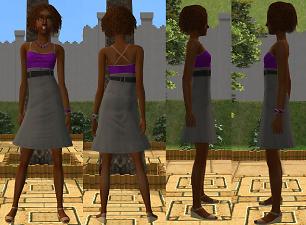 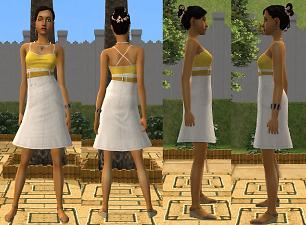 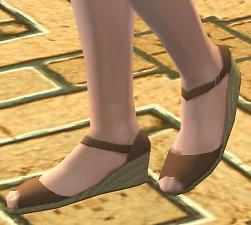 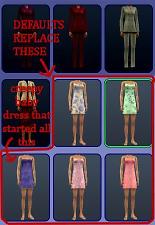 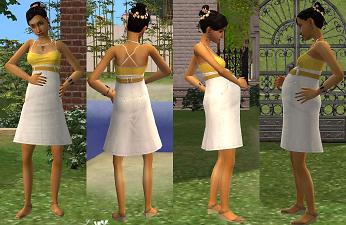 184 Thanks  Thanks     35 Favourited
This is a new mesh, and means that it's a brand new self contained object that usually does not require a specific Expansion pack (although this is possible depending on the type). It may have Recolours hosted on MTS - check below the description for more information.
*6.26.14-Update! Meshes have been updated to include a teen pregnancy morph. No changes were made to the adult meshes. These meshes are provided in all the folders, in place of the old ones. In case you've already downloaded this outfit before, you can opt to download just the meshes now. Please remember to let these overwrite or otherwise delete the previous version of this outfit.* 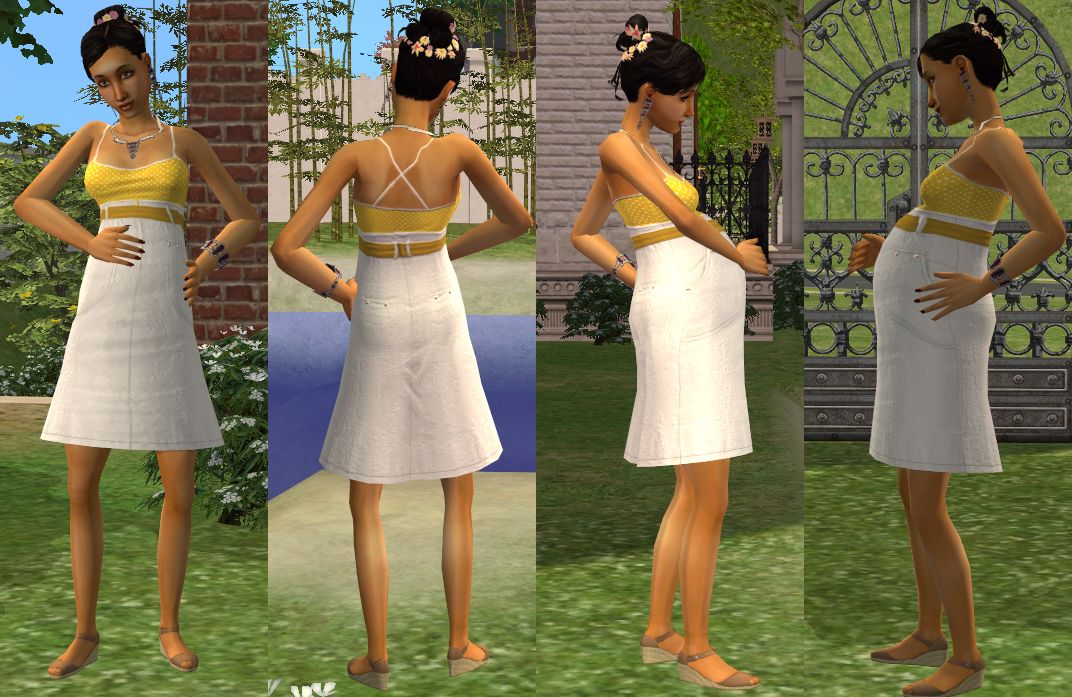 Hello! So, I've been working my way through the wonderful meshing tutorials tiggerypum and HystericalParoxysm wrote for Milkshape users. I had started up the second tutorial, when I had an epiphany. That purple dress with babies plastered on it was downright creepy. So I took my time retexturing it...and then Lastgale saw I had learned to shoe-swap...so he picked out a pair of H&M wedges and wanted me to put those on it...and it kept snowballing from there. (Thanks, by the way, to dustfinger for her incredible conversions of Maxis outfits for teenagers. I stole the teen H&M Frills wedges from her mesh, found here.)

These sundresses are like the originals, and thus are enabled for Everyday only, and they are available for Teens, Young Adults, and Adults, females only. All ages have the same textures. Please also note that these DO NOT have any jewelry meshed onto them; the jewelry seen in the pictures are simply accessories, not part of the dress.

As payment for demanding the heels (and 'cause he's nice), Lastgale took all the screenshots for me (although I had to edit them in Paintshop). He actually got into it, unlike how I would. I would've slapped the dresses on the models and made them stand to attention outside of one of Pleasantview's blandest homes. He moved them into that fancy mansion instead, and let them lounge around outside. Even little Don Jr. (who was accidentally born during the photoshoot while testing out the pregmorph) got to join in. Isn't he cute?

Here we'll have Nolynn showing off the fat morph: 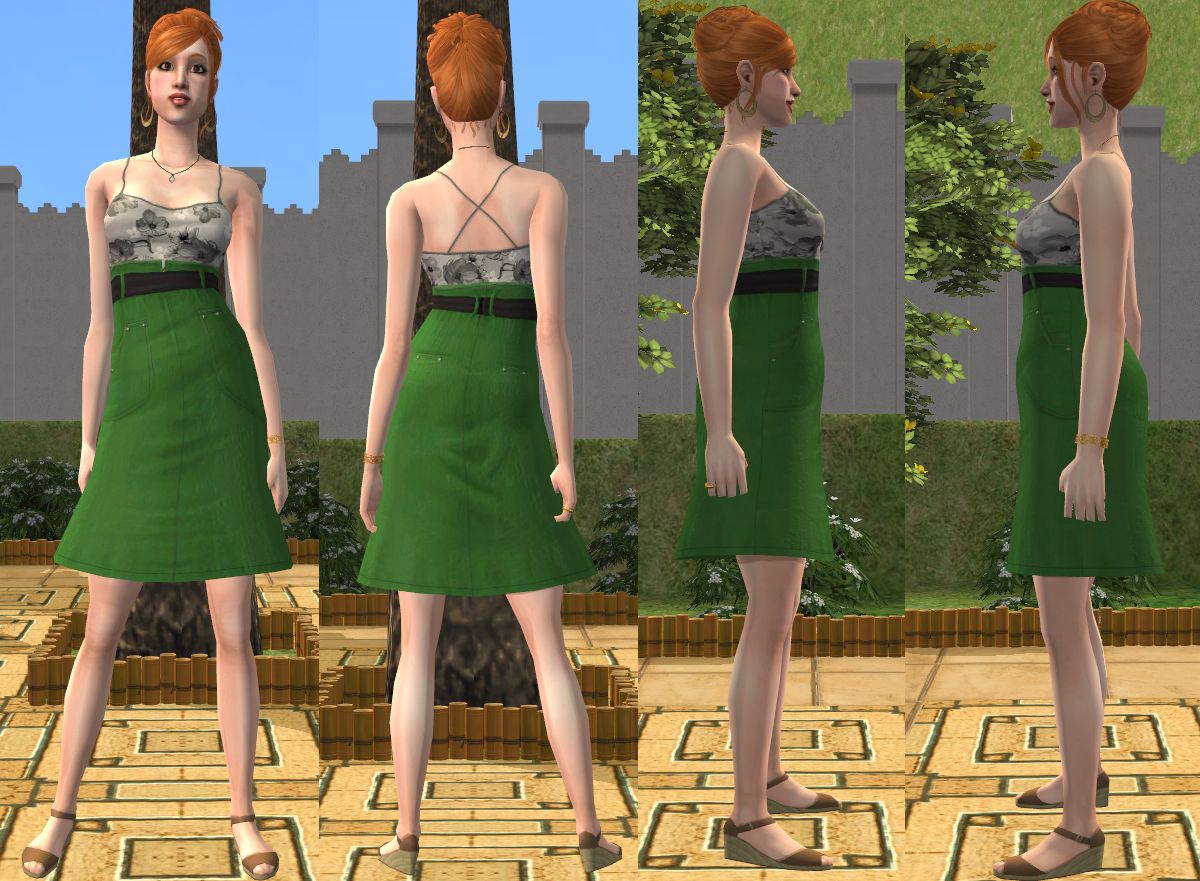 And Jasa generously became pregnant for these shots (though she still looks so skinny!): 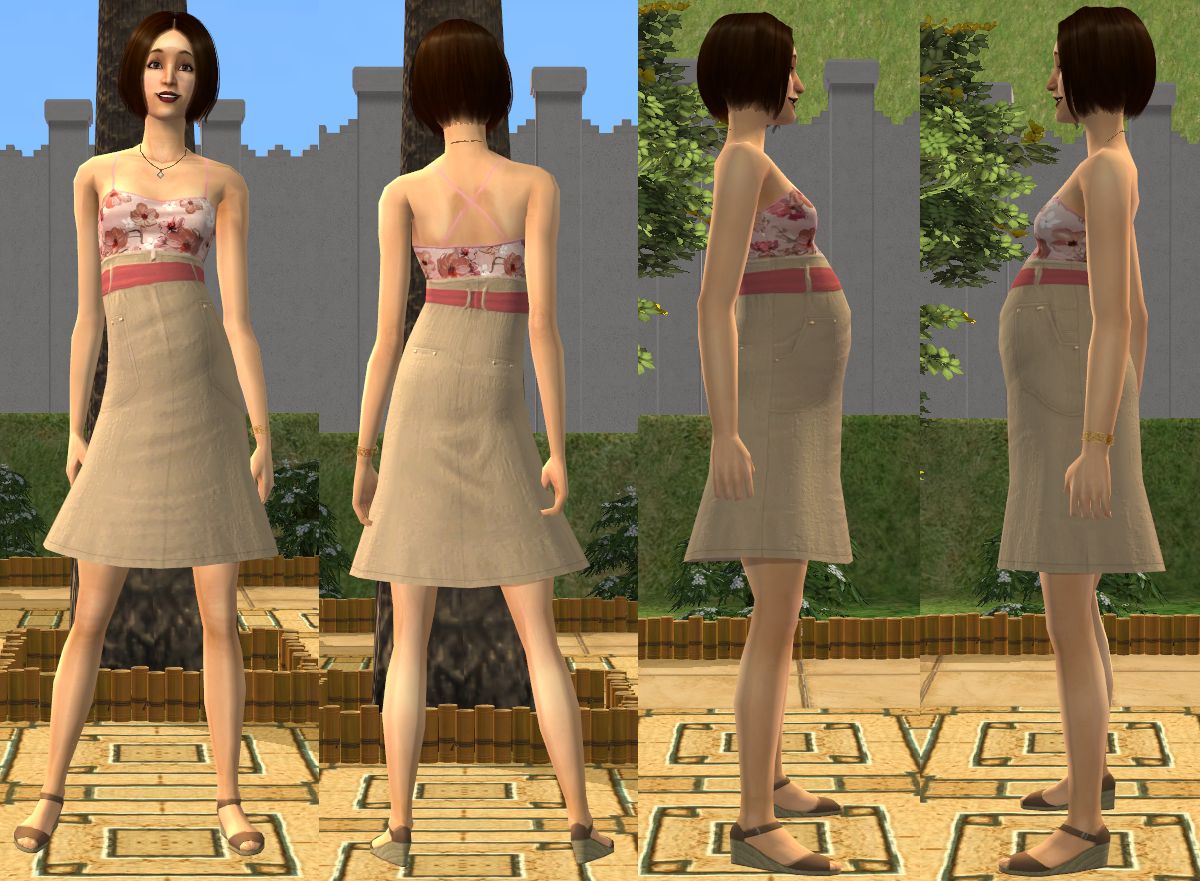 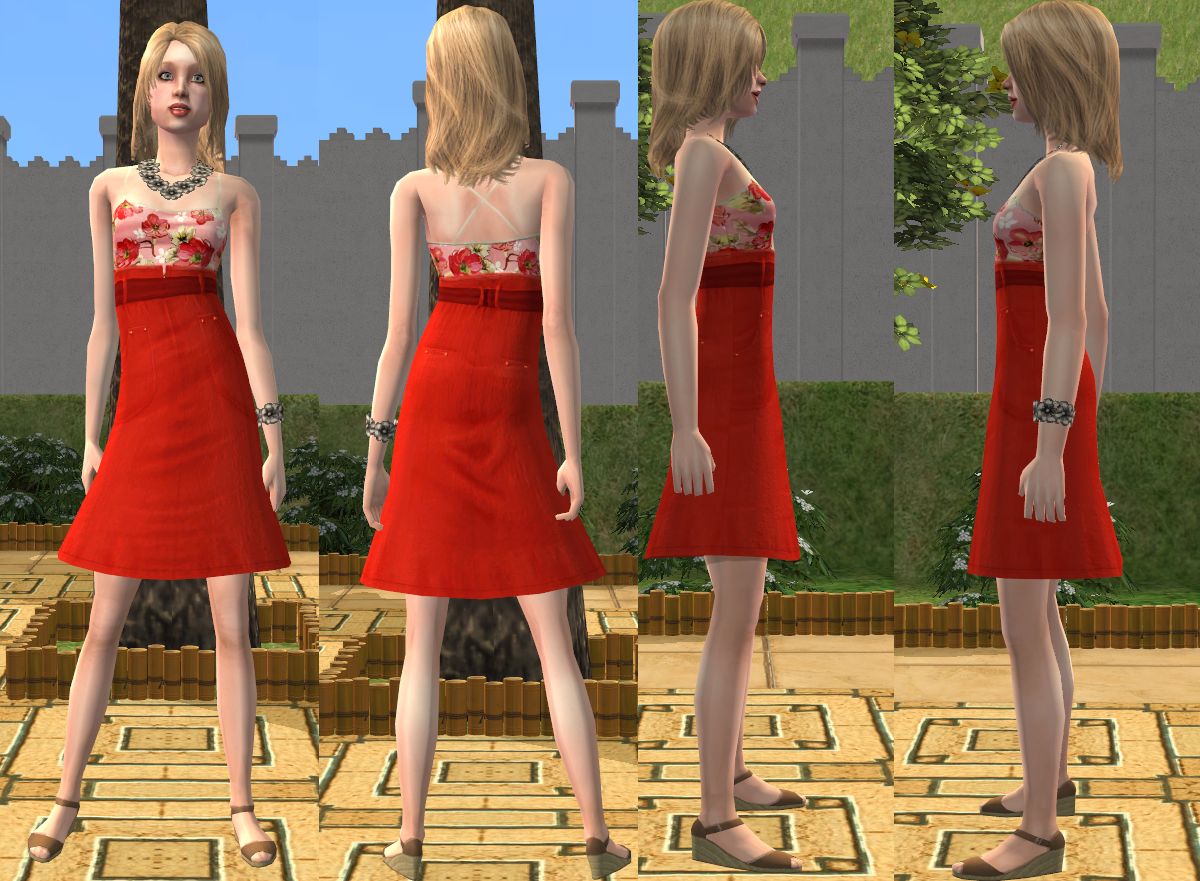 And Jonica looks a little mature for her age while flaunting the teen fat morph: 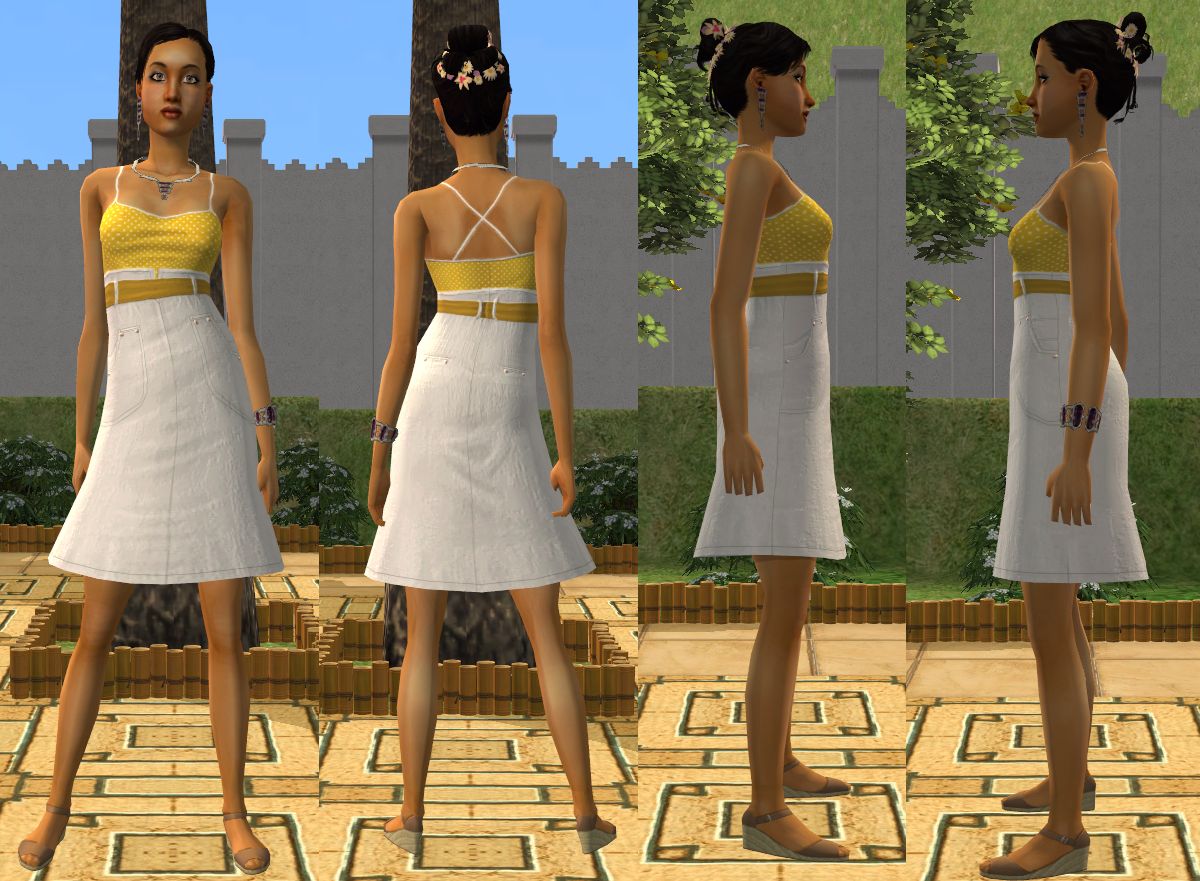 So, what we have here are three versions of the same dress. I made default replacements for myself, and I have decided to share them here. But hey, maybe you like that purple baby dress (or have a replacement for it that you prefer). So, there are two custom versions. One is just that-custom. No frills, nuttin'. Well, except the dress. It isn't townified, because some of you have themed hoods and other stuff, so you may not want people randomly spawning or growing up into these. The other custom version is texture-referenced. Or is it called repositoried? What that means is the teen files are itsy-bitsy, only a few kilobytes large, because they pull their textures from the adults. It's handy if you only want the adult files or if you know you'll want to use both the adult and teen files. BUT you'll need the adult files if you want the teen files. You can't just say, "Neat, the teens' dresses are only 3 kilobytes big; who needs those big old adult dress files that are clogging up my downloads folder?" Because then the teens will just be a big, freaky, naked dress. It'll be weird, trust me. (The texture-referenced files also are NOT townified.)

Nitpick details: As you can see from the attachment of the foot image, the shoes aren't perfect. The texture is about a pixel off, I think, but I tried to get it into place as much as I could. I'm still new to UV maps, I'm afraid. If I improve it, I'll update it. Besides that, there is some clipping with Sims' hands, as they don't realize their skirts are a bit poofier. Plus, they way they march around in them means some clipping with their knees. I'll keep working on my meshing "skills'.

Recommended Download: To have your Simmies use this dress while pregnant, you need some sort of hack that lets them wear anything while pregnant. I use Squinge's Pregnant Sims Wear Any Outfit for Apartment Life.

Both are within Maxis range, I think.

Additional Credits:
CC Seen on Models: (Thanks, Lastgale, for loading them with it! :P)

MAKEUP: Models are wearing Bruno's False Eyelashes, although Romia's is a recolor I did. Many of them are also wearing Realistic Eyeliner by Kimsie. They can also be seen wearing CatherineTCJD's lipgloss overlays. Some also decided to sneak on ASK's Just Lips Remix. Some are also blushing thanks to this set by Dolores_Haze. Sadly, I have no clue who did the heavy eyeshadow some of them are wearing; its filename is helpfully called "eyeshadow". Otherwise, their makeup is by me.

JEWELRY: They are also wearing shadylady482's nails, both the long edition and short version. Some of them are wearing earrings by Simhunter1750 and Almighty Hat's Plumbob Necklace. Many of them are wearing one of the sets from gudia11's Jewel 2010 post. And one of them is wearing a steampunk necklace from this set by sleepless_angel.

GENETICS: Models are all using skintones and eyes done by me.

Nolynn has done her hair up in Cazy's My Will (retextured by me). Jasa is also a fan of Cazy's, only she prefers the Susie style, again retextured by me. Whereas Naranna felt fine as she was and is still seen sporting Lidiqnata's edit of this Nouk hair. Clo, the one with the copper crown of hair, is using a sleek style, also by Cazy. Alma is seen in Trapping and Nymphy's lovely curls. Otherwise, their hair is by Maxis and retextured by me.

THANKS: Lastgale, who was so kind and helpful with preparing this upload. Thanks, buddy!
Also, thanks to Lidiqnata for her tips on screenshots when looking over this upload.

Of course, thanks to EAxis for The Sims 2 and BodyShop. Thanks to the Joneses for SimPE. The Compressorizer, as always, was invaluable. Naturally, thanks to Milkshape and Wes_Howe for his plugins. Also, my gratitude goes out to tiggerypum and HystericalParoxysm, for teaching me and so many others how to mesh.

And thanks to everyone who so warmly welcomed me here to MTS-I really appreciate it.