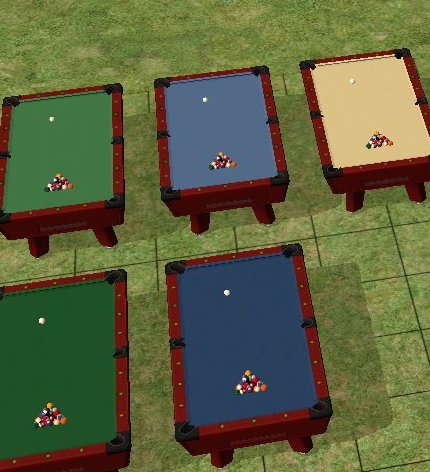 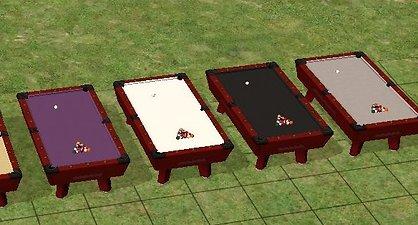 102 Thanks  Thanks     5 Favourited
This is a Maxis Recolour which means that it is a recolour of an item that already exists in your game. Please check the Expansion pack requirements to see which game pack it recolours.

I personally think the green and blue Maxis default colour options in the game are a little dark compared to genuine pool tables so I've made lighter green and lighter blue versions because of this . I also tried to make a beige cloth too seeing as I've seen tables with that colour beize , but it looks a bit salmony-pinky coloured in game . Sorry , I am a beginner

The screenshot below shows the blue and green tables compared to the Maxis defaults ( as well as the ' beige ' one I did . Sorry about the size of the pic . I wanted to get everything on the one pic though so everything looks a bit distant . I didn't recolor the table frames , although Wizards Of SimPE seems to include copies of them when it imports into the game , so if you install these and see that you have multiple copies of the mahogany looking frame it'll be from these cloths , although I think you'll be able to delete the identical multiple copies of the frames without affecting the new cloth colours ( although can someone please confirm if this is correct ) The extra table frame copies won't cause any harm though either way . The SimPE I used was version 33 so you shouldn't really have any problems with these . I won't pretend they were difficult to do though , because they're probably the easiest recolour possible ( and I still made a hash of one of them !

) Get the latest SimPE and try them with Wizards Of SimPE yourself and you'll see what I mean !

( the drumkit I recoloured was more difficult though

Credit goes to Quaxi , Numenor and the rest of the guys for making Wizards of SimPE so easy to use and for making stuff recolourable in the first place

*EDIT*
I've fixed the beige cloth by using the Maxis green cloth as a beige , and it now actually looks like beige instead of pink too . If you downloaded the previous beige cloth then Please delete it and download the new one . As well as fixing and improving the beige one , you'll also see that I've added Purple , Black , White and Grey cloths too . Although you can't see the ' nap ' of the cloth on the screenshot , I made sure to lighten the black one (and darken the white one , although that one doesn't look as good as the black ) a bit so when up close in the game you'll see the ' nap ' definition rather than it being a plain black rectangle

. On Thomas's advice I've also managed to avoid multiple copies of the mahogany table frame getting imported with the recoloured cloths too and therefore the beige cloth download is now much smaller , as well as the 4 new colours being smaller downloads too .