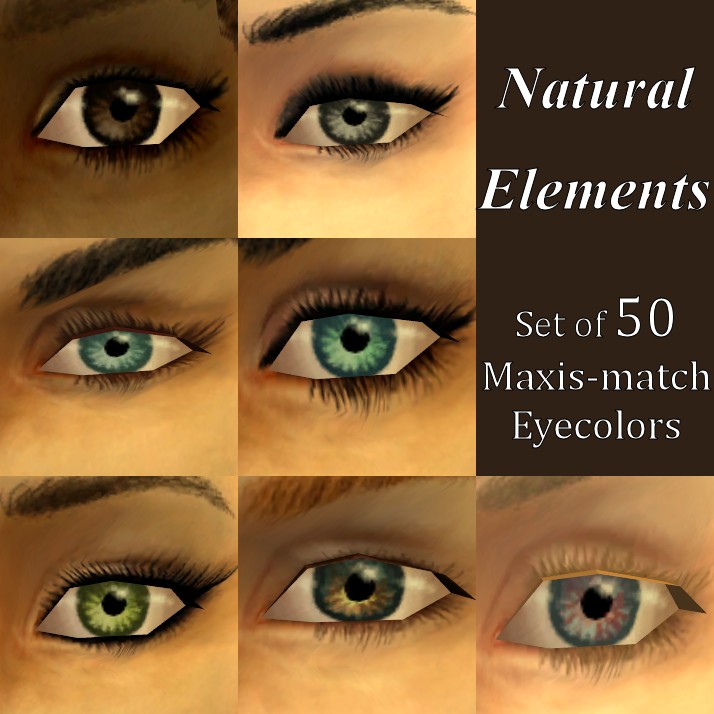 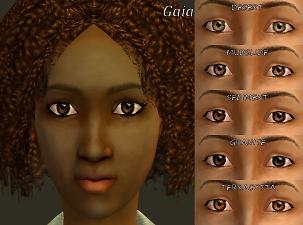 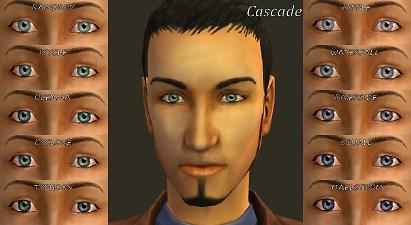 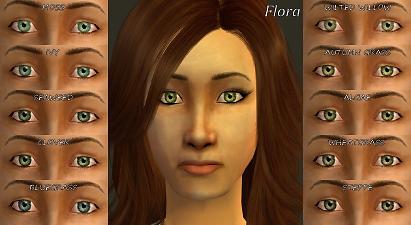 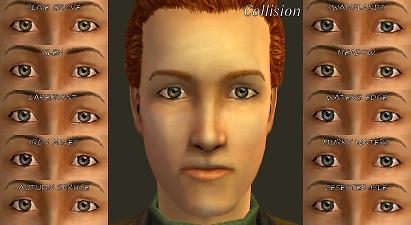 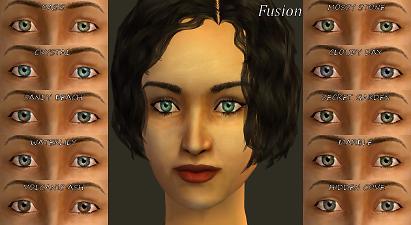 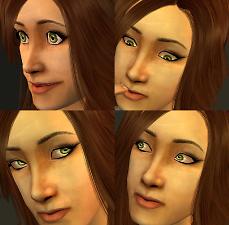 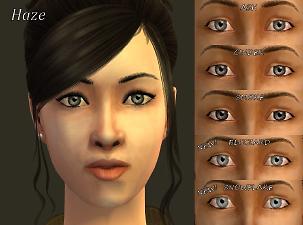 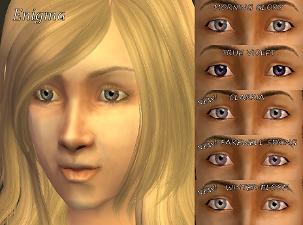 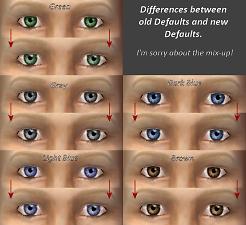 220 Thanks  Thanks     86 Favourited
Want your already-made Sims to use these eyes? Naarshada wrote a quick guide with all of their SimPE values in post 25. Thanks for all that hard work, Naarshada!

Now the defaults include the 50 natural colors! This means you can pick and choose which shade will be your Default Brown, Default Dark Blue, Default Light Blue, Default Green, and Default Gray...and you get it. Below, I've marked which sets have been enabled for which colors. Please consider this an apology gift for messing up the default replacements in the first place. And for those of you new to this download, consider it a gift.

Just remember, you can only have one default replacement for each color, otherwise they will conflict. So choose only one Brown, one Gray, and so on.

3.13.15: Update! Wow, five months later and I finally realized I uploaded the wrong default replacements. It seems I had uploaded a set with beta textures previously. I have just fixed the archive so the correct default replacements are now available. I am so sorry for not realizing this sooner, especially to all those who have downloaded the old defaults. In less of a blunder, I uploaded a new archive which contains all 55 custom eyes. Inside the archive, you can choose between a folder that has all the eyes packaged separately OR you can install a single package that contains all 55 eyes.

10.20.14: Update! Haze and Enigma now have enough colors to be considered sets. It was kind of silly to have sets of two or three colors, so they've been updated to have a total of five shades each. These changes are reflected in the screenshots, marked by a shiny New! logo.

The new colors have been given genetic values (Haze's set is all recessive and townie-enabled, Enigma is super recessive and not enabled for townies).

I'd like to present my Natural Elements eyes, as seen on the models for my Imperfection skins. It's been a joy sharing creations for Sims 2 with all of you, but as I haven't been playing much lately, this is my last completed project.

Anyway, enough of the sappy stuff.

These eyes are fairly Maxis-match and blend in well with the game's graphics, in my opinion. The sclera does have some vein details, but the eyes are still animation-friendly, as you can see from the attached pic of Amy's bugged out eyes.

There are fifty eye colors in all, divided amongst seven sets. The swatches were taken in Create-A-Sim, but the models are all shown in-game. Also attached is a set of default replacements.

These eyes have been geneticized and townie-enabled (except for Enigma, which is genetic but not townie-enabled). Feel like changing their values? Check out Quinctia's tutorial of how to do so, which taught me all I know about genetics.

Gaia: Five shades of brown, all of which are dominant. These are also available as default replacements for Brown. 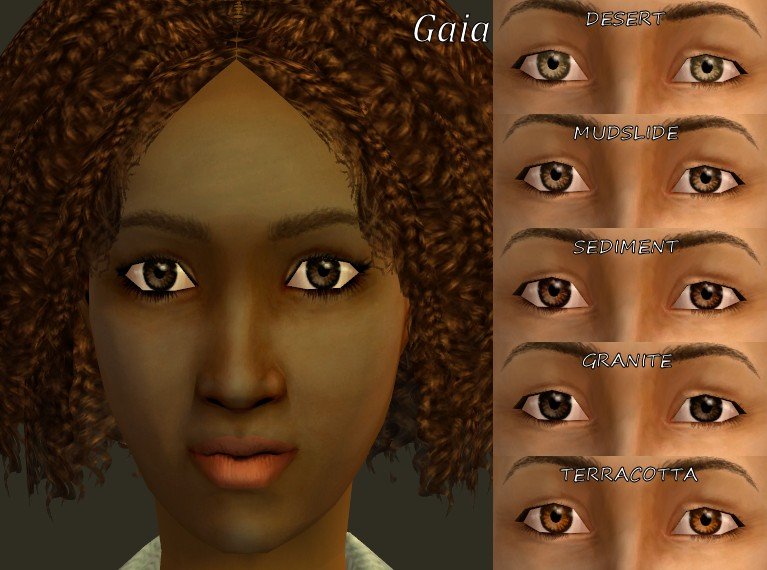 Cascade: Ten shades of blue, all of which are recessive. (Sorry Maxis, but why is Dark Blue more dominant than Light Blue? Why even have two shades of blue for defaults?) And on that note, these are all available as BOTH Dark Blue and Light Blue default replacements. 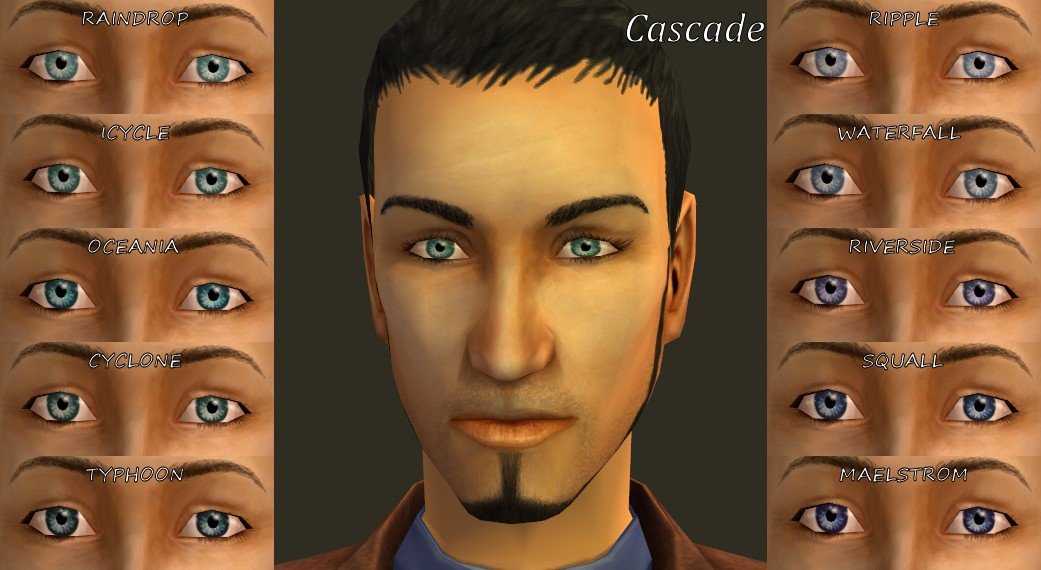 Flora: Ten shades of green, all of which are recessive. These are also available as default replacements for Green. 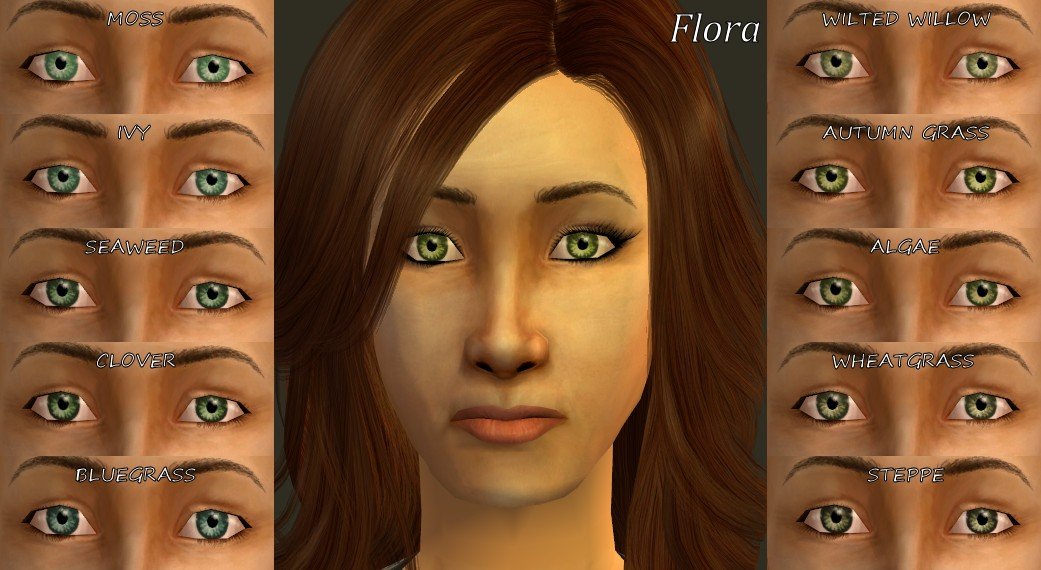 Haze: Not to be confused with hazel, these are three shades of gray, all of which are recessive. All of them are available as default replacements for Gray. 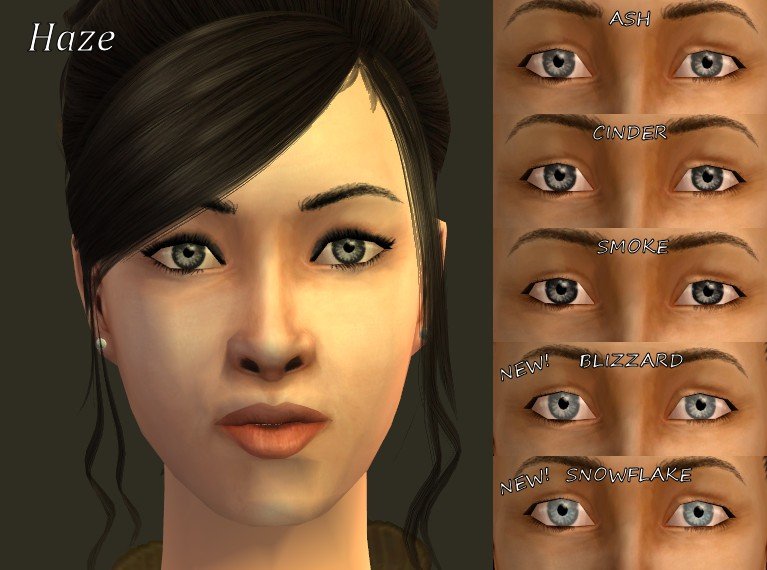 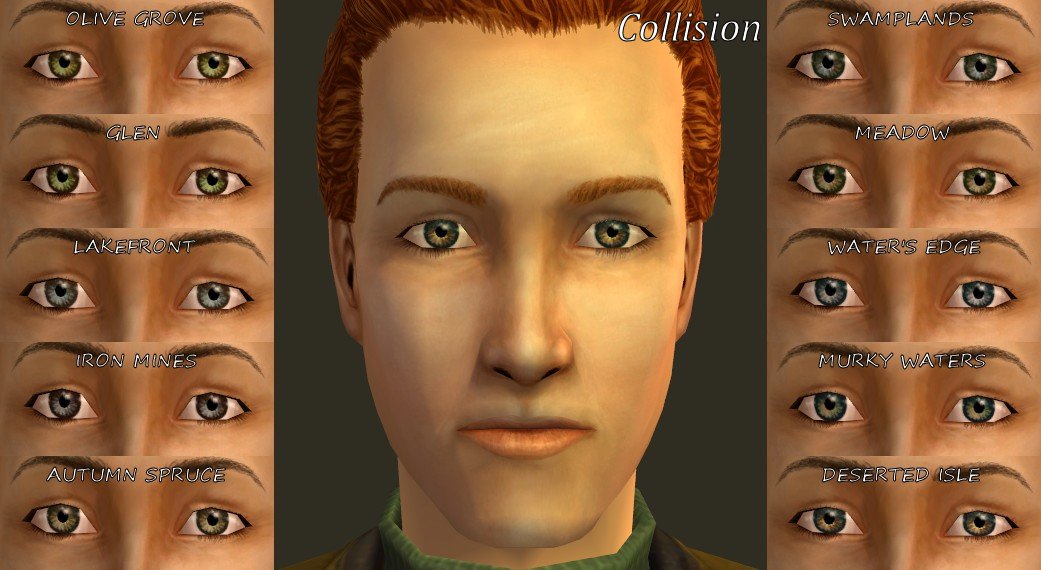 Fusion: Ten lighter mixed shades, all recessive. These ones are available as default replacements for Light Blue. 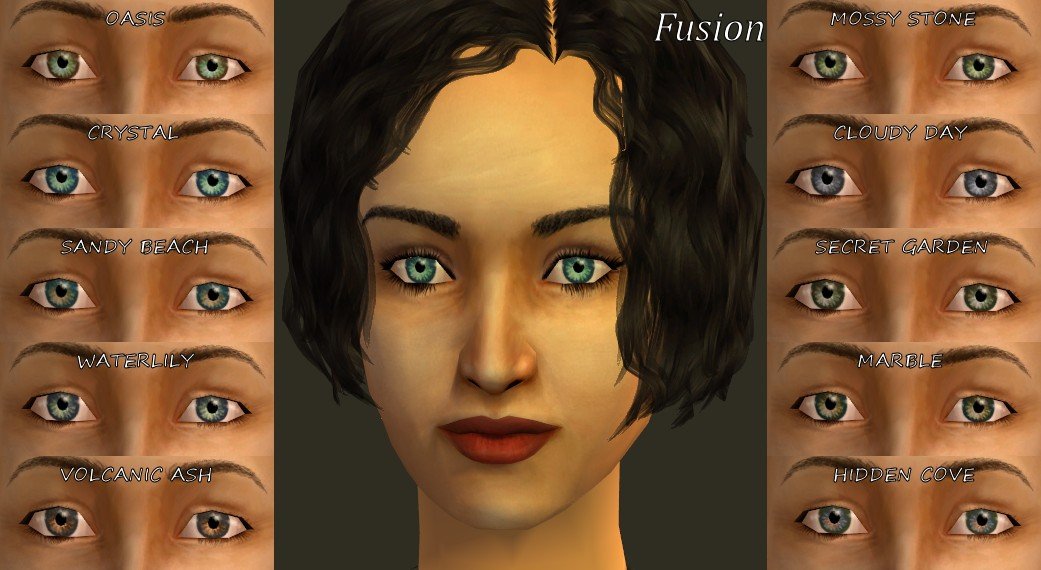 Enigma: Special add-ons inspired by albino eyes found online. These two colors are very recessive, and townies will not spawn with them. Sorry, I've never met a real albino, but from what I've read on albinism, most cases don't have the infamous blood red eyes and usually have light or violet eyes, sometimes with pink flecks where the blood vessels are visible because the eyes are so translucent from lack of melanin. My apologies if I'm terribly uninformed. You can always think of it as these eyes are as realistic looking as the rest of the set.

None of this set is available as a default replacement, since I wasn't sure what it would replace. 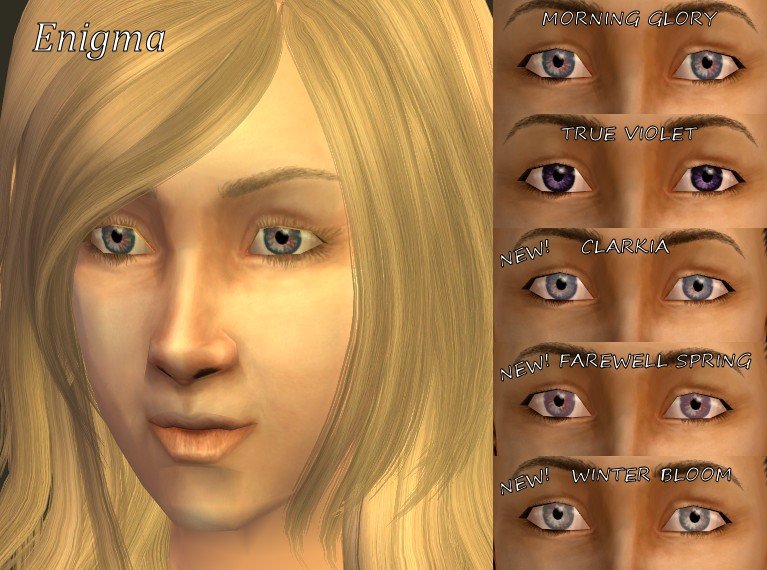 Recommended Downloads: These eyes work well with special eye effects, such as this one made by sugarandcaffeine or my own sets, found here and here.

TOU
Have fun with them.

If you feel like using these in a project of your own, go ahead. I've uploaded the original PNGs to Dropbox, along with the PSD template that I used to recolor all these eyes, in case you feel like making your own shades. Have at it!


Skintones are by me, from my Imperfection Part One and Part Two. Eyebrows are by me.

Makeup: Eyelashes are by me and Bruno, from their False Eyelashes set, I believe. Eye shadows are from Nysha's Peahen set, Dedication's Soft Eyeshadows, and some defaults I made from edited textures by Bruno, possibly their Eyelights set. Eyeliner is by Kimsie.

Fuzzies: Eyebrows and facial hair are by me, unreleased and not going to be released because I can't remember if I used any bits from other creators.

Additional Credits:
Models: Three of the models (Cascade, Flora, and Haze) are my 3to2 conversions of Sims made by Lunararc. The original Sims were for The Sims 3, and are the following: Fadil Gorkem, Amy Spencer, and Nina Clark.

Maxis/EA for the fantastic Sims 2 that we all love modding so much.
Mod the Sims for being a fun place to host my stuff.
SimPE and its creators.
Corel Paintshop Pro X6 and GIMP.
DJFade, for The Compressorizer.
Fraps
Jurassic Park: The Game for inspiring these eyes, although they didn't end up terribly much like the game's. spikesminx for requesting a new shade; hope Snowflake is what you were looking for. If not, let me know.