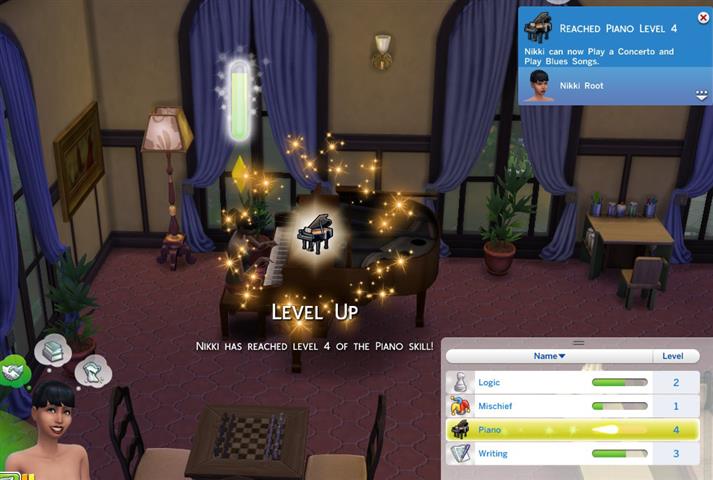 These mods are outdated and I won't be remaking them because of the issue which arises if one of the mods is used for awhile and then removed, the skill levels on sims adjust back to where they 'should' have been. This issue is described in the comments. On the current patch 1.16.61 and a large number of previous patch levels, these mods are completely unsafe and should not be used! For a fast skills mod I recommend using my Savant Trait mod: http://www.modthesims.info/download.php?t=574360

A new Very Fast mod is added which goes much faster than the 4x. The aspect where skilling takes much longer from level 8 to 9 (for example) than level 2 to 3 is almost removed in this version; the skilling up at the higher levels is only an itsy-bit slower. Remove any other of these mods from the Mods folder when using a new one.

A Slower Skills mod is added which makes the skilling take twice as long as the vanilla game. Skill level one isn't altered. Obviously, don't use this mod at the same time as the other, but instead of.

These mods increase the speed of skilling on all child skills and Teen, YA, Adult and Elder skills. There are two flavors, a 2x speed and a 4x speed. (The 4x speed is faster, if this isn't obvious.) Use one or the other.

The skill level 1 isn't adjusted as it goes so fast in vanilla game that there isn't any need to go faster.

Unzip and place the .package file in the Mods folder or subfolder.

Additional Credits:
Created with the use of s4pe by Kuree and Sims4Group, and the Sims4 XML Extractor and Sims4 Data Tool by velocitygrass.

Need more information?
Back to download view
258 Comments / Replies (Who?)