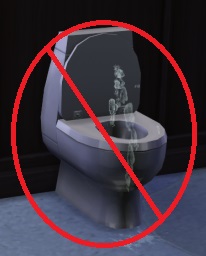 NOTICE 10/23/2017: After a falling out with EA's community management, I have deleted my Origin account and have retired indefinitely from The Sims.


The toilets in The Sims 4 leave a lot to be desired. Toilets used to just clog up and be nasty. But no, apparently EA thought it would be funny for broken toilets to spring leaks of high pressure water and become unusable. This of course increases the chance that a Sim will pee themselves for want of a working toilet. There's also the issue of gaining Handiness from unclogging toilets. Who ever became a master handyman from unclogging toilets? Also, there is a text error that causes the pregnancy test to say "Take An Angry Poop", and even if it wasn't glitched, "Take An Angry Poop" is lame and unfunny.

With this mod, toilets clog, like they used to in the previous games. The toilet is still usable, but automatically gives the "Icky Plumbing" buff, just like any other dirty plumbing fixture, with the reason of "(From Clogged Toilet)". Hey, it's still greatly preferable to Peed Pants and a possible Ultimate Mortification death. Flushing a clogged toilet causes a puddle, just like in the unmodded game.

Unclogging a toilet does not increase handiness (though it will be faster with some handiness skill), nor does it yield a trash pile you can salvage parts from. Who would want to salvage poop-covered parts out of a clogged toilet? Too bad I couldn't put in a "plunger" animation to represent the unclogging properly.

This should also get rid of the "Angry Poop" pregnancy tests while angry. In fact, this should get rid of the "Angry Poop" and "Pee Like a Champion" text, because they don't do anything much, and they don't add anything much. They're just lame and unfunny. I used the slots for the emotional poop texts to make way for my new Unclog text and bad moodlet reason, rather than adding new text entries that might get stomped by a future update.

As one last extra, I lowered the Poop Threshold, so men should pee standing up until 1/3 of the bladder meter.

For those as fond of the Fountain Broken Toilet as EA is, I have versions of the mod that only lower the Poop Threshold and/or remove the emotional poop texts. All of them will remove the Angry Poop Pregnancy Test.

Testing this was fun - making a Sim pee a lot of times until the toilet conked out - but apparently they made the "sit on toilet" posture incompatible with a broken toilet, causing routefails (or more precisely, animation fails) until I found the rogue tuning.

XMLs that are changed in all flavors:

XMLs changed only in the No Fountain Toilets flavor: