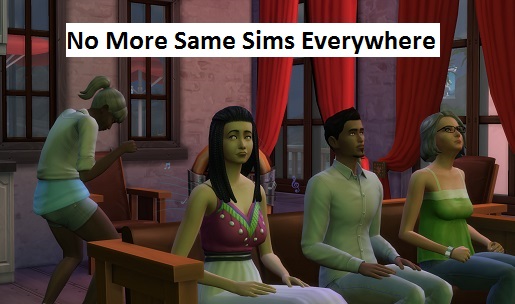 This mod modifies the function that picks the Sims who will appear at venues, shops, in public spaces, etc to make it more random, thus preventing the same Sims to appear everywhere.

Installation
Do not unzip it, just put the mod into your Mod folder and don't forget to enable script mods (Game Options > Other)

Technical details
When picking Sims to populate the public area, the game calculates a score to determine how close they are to the criteria given, then does a weighted random based on those scores, but only for the top results (5 by default), resulting in the same Sims appearing each time if the criteria are the same. This mod shuffles the list of Sims before doing the weighted random, so the top results are still the best score, but in a random order.

Additional Credits:
Scumbumbo for his python explanations and for mentionning the uncorrectly decompiled "while"
Deaderpool for helping me with the Python injectors
Other Information

Baby is born so updating my mods is a bit slower than usual.