Tell Ghost Story - no auto or none at all 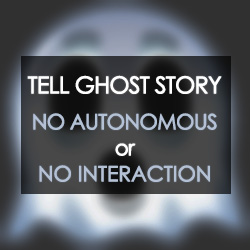 I hate it whenever I happen to focus on a Sim only to discover they're telling ghost stories again and they're obviously so good at it that everyone is (literally) wetting themselves and starving over listening. Now you can either make the interaction non-autonomous, or remove it from the menu altogether!

You need Generations, otherwise this won't do anything.
Made with patch 1.63 but you shouldn't experience issues with other patch levels.
Choose only one of the two mods, either the "no autonomous" version, or the "no interaction" version. Otherwise they will conflict!

Both versions modify the TellGhostStory_TellGhostStory and ListenToGhostStory_Sim ITUNs and will conflict with other mods that also affect these resources.
For the "no interaction" version, I simply edited out the ages so that the interaction won't show up for any age.