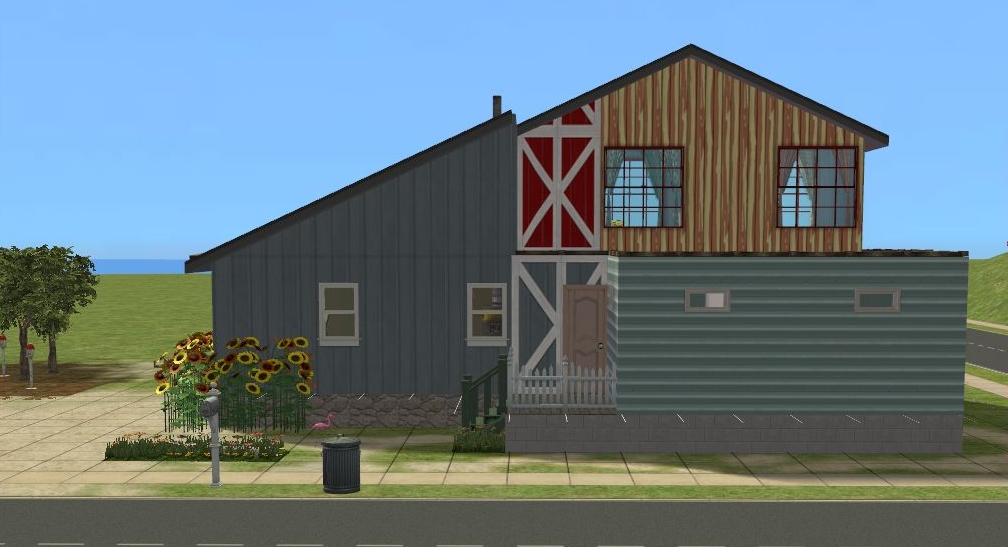 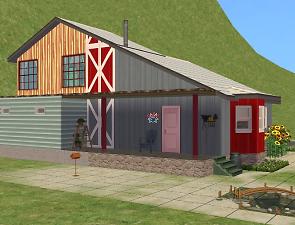 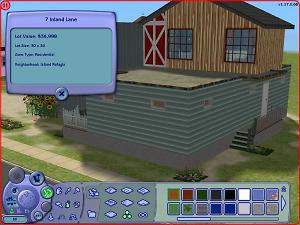 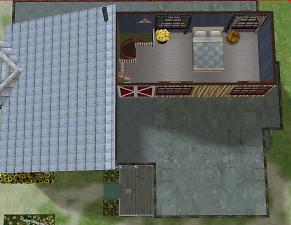 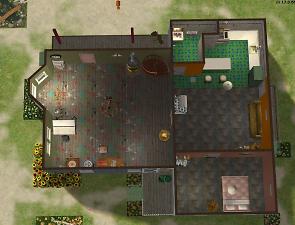 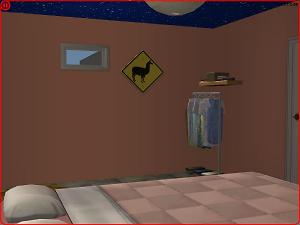 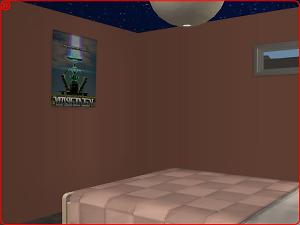 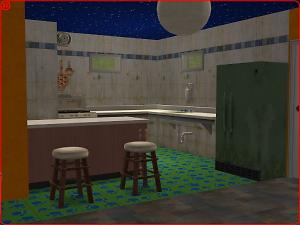 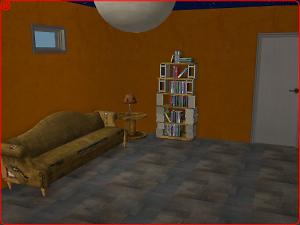 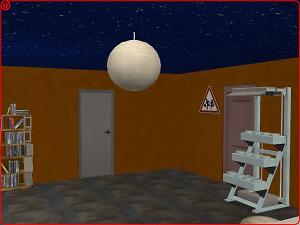 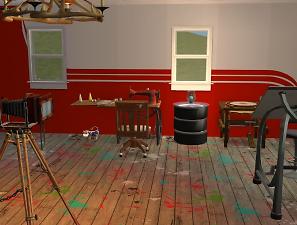 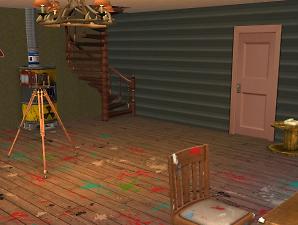 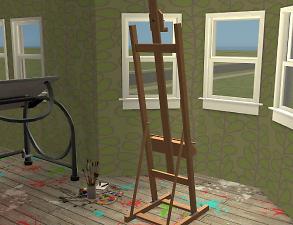 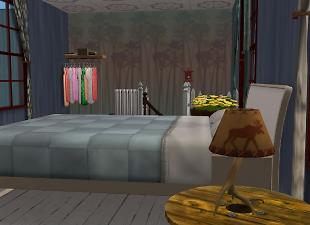 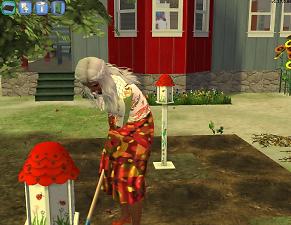 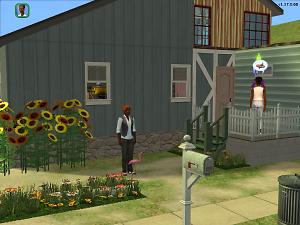 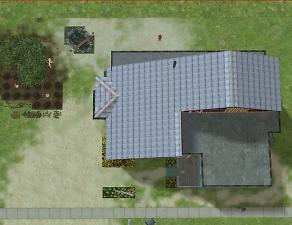 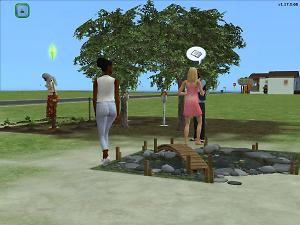 Rhodesfrontview.jpg - width=1008 height=547
A trailer attached to an old cabin, with an additional room added on the trailer&#039;s roof. Is it not glorious? :)

Rhodesreardiaganol.jpg - width=968 height=738
The rear, porch indicating the front of the original cabin.

Rhodesccfreeprice.jpg - width=1024 height=768
The front door of the old trailer is now the side door.Addition built on top. Barn panels indicate the joins between the various structures.

betterupperfloorplan.jpg - width=978 height=756
Upstairs. Note that the tarpaper on the roof of the extension is newer than on the original trailer. Also the floorboards in the bedroom don&#039;t quite match up.

Rhodesfreefloorplan.jpg - width=974 height=744
The trailer provides the kitchen, living, and guest room, while the cabin has become a studio.

Rhodesccfreeguestbed1.jpg - width=1024 height=768
People are always crashing with the Rhodeses, so they turned the original trailer bedroom into a guest bedroom. That sign isn&#039;t really stolen - llamas hadn&#039;t used that crossing in years!

Rhodesccfreekitchen.jpg - width=1024 height=768
The trailer&#039;s kitchenette. They painted the ceiling themselves.

rhodesccfreeliving2.jpg - width=1024 height=768
They aren&#039;t into material goods and mostly hang out on the floor anyhow.

Rhodesstudio2.jpg - width=970 height=734
In the studio, Country designs and sews clothing. Thunder throws pots. They both use the camera sometimes.

Rhodesstudio.jpg - width=974 height=736
Here you can see where the trailer and cabin are joined together, and the stairs to the added upper story.

RhodesStudio3.jpg - width=964 height=740
Thunder, a messy painter, moves her easel a lot, but the light is usually best right here.

bedroom.jpg - width=989 height=717
Their bedroom. They made the lamp of cast-off deer antlers and salvaged the windows from a boat shed.

Countrygarden.jpg - width=968 height=749
Country gets the garden in. You can just see Thunder, painting in the bay window.

gridlessroofshot.jpg - width=955 height=736
As you see, they have a sizable garden, a koi pond, and room to park the schoolbus they live in when traveling the Renfaire circuit.

Important Notice: If you downloaded this house before 8/16/2017, you got the wrong house and why didn't anybody tell me before?!?! I've been sleep deprived and zipped up the much-smaller Walters house. Now that someone's finally told me I've removed that one and put up the correct one and I hope all 88 of you who downloaded to date enjoy both.

Made originally for Joandsarah's Community Spirit foundation contest, this was not my highest scoring house, but it was the one received with the most enthusiasm, including requests to upload it, so here it is. The contest requirements were to build on the provided foundation for a couple of retired hippy artists, who were into recycling, wanted a large fruit and vegetable garden, and needed a flamingo in the yard, with a hard price limit of $35,000.

People who followed that thread will note that the carpet and ceiling in the trailer are not the same as in the original, as I accidentally used an extracted Castaways floor on the ceiling (shells and pebbles) and an extracted Life Stories one on the floor (ratty orange-and-gray). This cost me the no-CC bonus, and I made an empty CC free AnyGameStarter game to build in from that point on. This version is packaged from the original lot, moved to the AGS setup, and the accidental CC replaced. Playtesting and in-use pictures were all shot in a copy of the lot in my full game. The one in the zip has never been inhabited, and all accidental CC has been scrubbed out with Clean Installer.

If you look closely at the pictures, you can see where the trailer was put on cinderblocks to match the height of the cabin foundation; where a small addition, mostly made of barn panels. was built to join the two structures; that the wood stove in the studio is on tile so it won't burn a hole in the floor; that seaweed is being used to fertilize the garden; and that many of the household items are repurposed, homemade, or salvaged. There's plenty of room left to add your own recycled CC objects; or you can just stack pots and sewn items everywhere till it's time to hit the Renfaire circuit again. The terrain paint is sandy because I was envisioning my contest neighborhood as a barrier island, but it could also be placed in a clearing in the woods (though you'd have to find something besides seaweed to fertilize with).

Additional Credits:
Thanks to Joandsarah for hosting the contest; to everybody in the contest, who were so encouraging and liked the house so much; to the makers of Clean Installer for helping me get rid of that pesky CC; and to the makers of AGS for giving me a place to build risk-free.

I can't build. I can't draw. I make sims most people think are ugly. But I saw demand for neighborhoods with pre-existing characters and storyline and I thought: "Heck, I can do character and story for days and not get tired."

So I made Widespot, and I uploaded it here on MTS because who knows who I am anywhere else in the simming community? Anyone who downloads it can do whatever they like with it, because that's what the game's all about; but I would appreciate anyone who shares it on blogs, tumbler, etc., providing the link to where they got it.