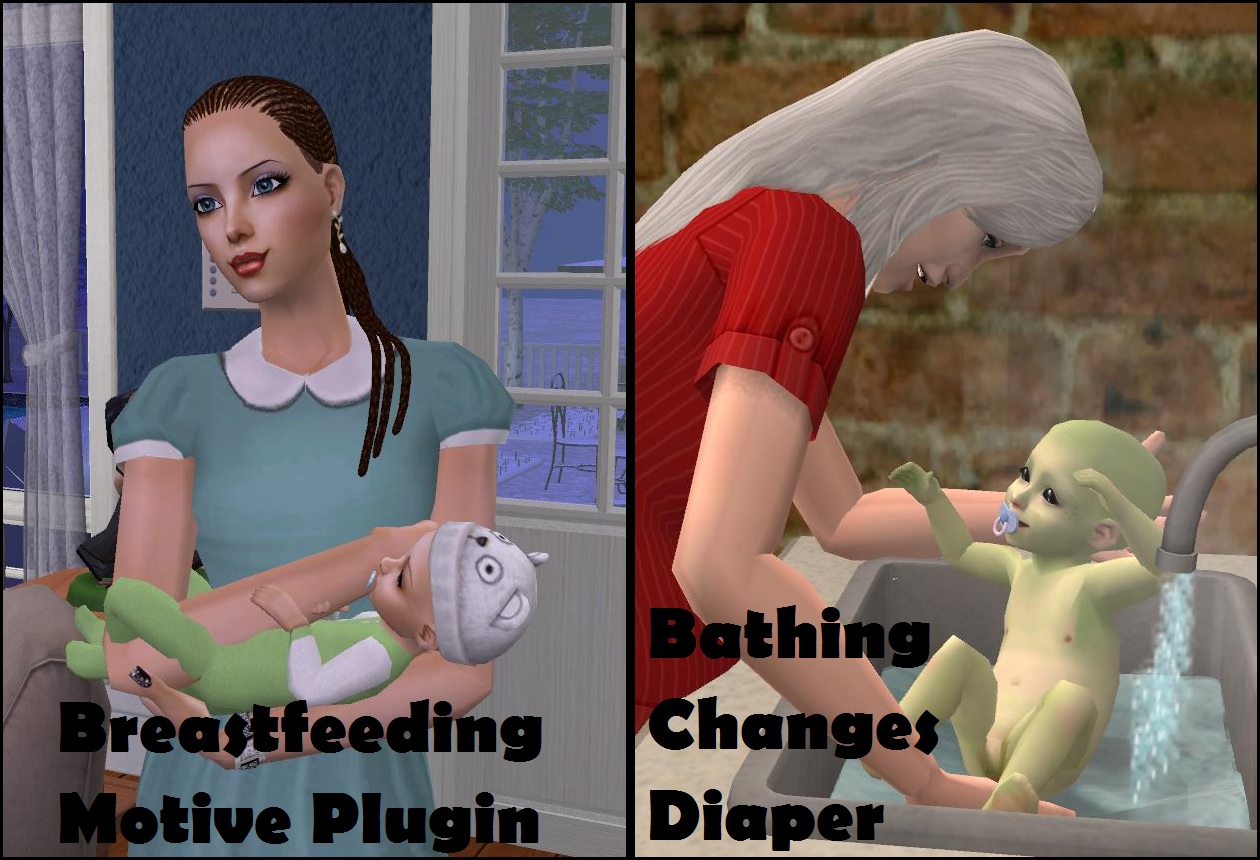 Created by gammi
View all Downloads
Uploaded: 30th Sep 2017 at 11:25 PM
Updated: 23rd Nov 2017 at 7:01 PM
In addition to the nursery set, we created some global mods to suit the theme. Unfortunately this excellent theme happened in a busy real life period, so most aren't finished yet, but two are so we figured we'd release those for a start.

Breastfeeding motive plugin
As some of you may know, Maxis actually coded a breastfeeding interaction. They didn't finish it, but thanks to the work of modders that finished the process our simmies can breastfeed. This mod is a plugin for existing mods that enable breastfeeding. You must have one of these mods (Squinge's found here, BoilingOil's found here) or this mod won't do anything. It shouldn't matter which mod you use to enable nursing, this should work for all of them.

So what does it do exactly? It is a plugin that functions a global mod that overrides the motive part of nursing code, changing the effect breastfeeding has on motives on both the baby and the nursing Sim. Again, this does NOT enable breastfeeding, you must have a mod that enables or this mod is pointless. Anywho, in the original coding nursing only affected the hunger and comfort of mother and hunger of the baby. But in real life, eating triggers reflexes that causes most babies to soil their diaper, so I thought it should affect the bladder motive. Additionally, nursing is not a passive thing, it's an active process that takes energy, which means the baby should get tired afterwards. It's also very soothing to most babies, making them feel safe and at ease. So isn't it reasonable that it would increase social and comfort substantially? Squinge adressed this when creating his enabling mod, so in Squinges/BOs versions the baby does gain a little comfort, and both baby and mother get a little social, but it's very slow. Squinge also did not change the original hunger setting, and while things do take longer in Sims than it does in real life the time it takes to nurse a hungry baby back to full hunger is kind of ridiculous. There are mods that supposedly increase hunger gain, but they haven't worked in my game. So I (gummilutt) decided to make my own, and rewrite the motive part of coding so it would better reflect reality.

Motive bars go from -100 to 100, so -100 is an empty bar, 0 is a half full bar, and 100 is a full bar. The listed numbers are gain/loss per hour. So with this mod, a completely starved baby would be full in 50 minutes. Since you probably don't let babies completely starve before feeding them, it's more likely it takes about 30 minutes to feed the baby. In that time, the baby will max out on comfort and social, and probably be tired and very close to wetting their diaper. The nursing Sim will take a small hit to hunger, but feel more comfortable and most likely have a full social bar.

When rewriting the code I made sure to use a BCON to store the values, to make it easy to edit. So if you don't like the rates I chose, you could easily edit the values yourself with SimPE.

Known Issues
If the baby soils their diaper while being breastfeed, the interaction can get stuck in a loop where the interaction continues but hunger stops increasing which means it never stops on it's own. This is benign, you can stop it by cancelling the interaction, but if you don't notice it Sims will just stand there pretending to feed for hours. Because of this we've set it up to stop feeding if the baby's diaper gets soiled. We've done our best to make sure it stops, but on rare occasion it may get stuck in this loop. This is not because of our code, it's an existing error with the nursing code, but with our mod it should happen less.

Because this mod adds bladder decrease from nursing, and the problem above requires interaction to stop at soiled diaper to avoid getting stuck in a loop, you may get situations where the Sim stops nursing because of bladder motive despite the baby still being hungry. So if you notice the interaction only ran for a short time and that the baby needs a diaper change right after, you may want to nurse the baby again to make sure their hunger bar is filled.

Compatibility
Requires base game. Compatible with all EPs/SPs.

If you use Chris Hatch's extra plugin you have to make sure this mod loads after his plugin. This mod will show a conflict with his, but I have included his changes in my mod so if you just load mine last both of our mods will do everything they are supposed to do.

Conflicts with Chaaviks shorter breastfeeding time mod. You have to choose between this mod and Chaaviks mod.

Updates
2017-10-01 Breastfeeding plugin has now been made compatible with Chris Hatch's extra plugin for breastfeeding. If you use CHs mod and you downloaded previous to this update, please re-download. Make sure this plugin loads after CHs mod.
2017-10-15 When getting this ready for upload I forgot that Squinge had added comfort and social gain when making his, re-using lines in the BCON to do so. So it previously stated babies did not gain comfort, and neither gained social, which isn't true. I have now corrected the misinformation. I apologize for the misinformation.
2017-11-23 Please re-download! When setting up this mod I accidentally used the wrong argument for the hunger check, which means the hunger check to see if baby was full wasn't working correctly. Thank you Devon_Aster for reporting this! If you had this mod before, please re-download so the hunger check works properly for you.

Bathing changes diaper
Has it ever annoyed you that when a baby or toddler wets their diaper and their hygiene tanks, Sims more often than not choose to fix the situation by giving them a bath, only to put the dirty diaper back on them. Sure, they have a full hygiene bar, but who puts a dirty diaper back on a Sim? The autonomy on changing table is broken, and visitors can't use it any way so the odds of Sims giving the baby/toddler a bath if acting autonomously are quite high. Well no more! With this global mod, when giving a baby or toddler a bath, Sims put on a fresh diaper instead of the old used one.

Compatibility
This mod is available for all setups. It comes in three different versions. Which one you should use depends on what your game engine is, you should use the version matching your highest EP.

Conflicts
None that I know of. Will only conflicts with mods that edit the interactions bathe baby in a sink, and bathe toddler in a tub.

Credits
Thank you to smorbie1 who posted about this issue in the discussion forums a while back, inspiring us to make a mod to fix it.
Files Need help with downloading or installing content? Click here!