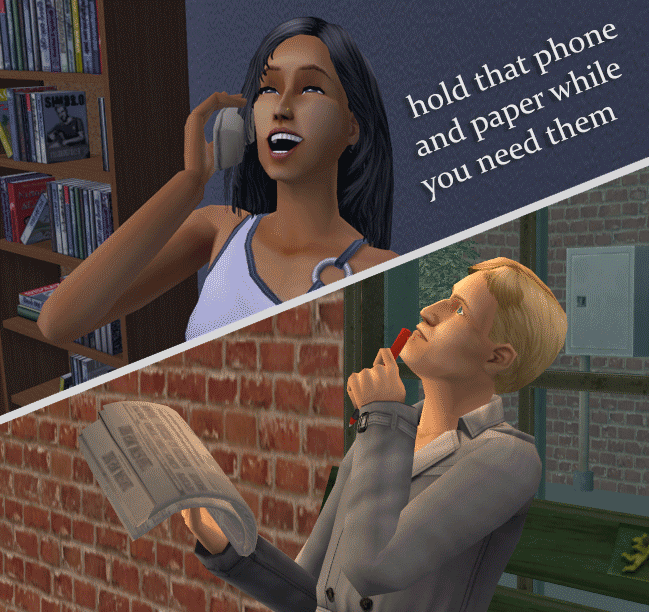 214 Thanks  Thanks     56 Favourited
Do you really have to put newspaper down before you read another section?
And, I suppose, your phone handset needs recharging after every call?
No? Stop rushing to drop them then. Keep them while you need them!

These are two global mods. Both require any EP/SP from Night Life and up. If you only have University, they are not going to work for you. Tested and confirmed by gummilutt.

May conflict with other mods that alter newspaper or phones. If you encounter bugs, HCDU may help to catch the cause.

hold that newspaper
As was mentioned by someone, sims shouldn't drop newspaper if their next interaction is with the same paper. With this mod, sims hold the paper between actions, excluding debug ones, because those don't have animations. They still fold and unfold it. Fixing this would require changing every newspaper interaction in an invasive way, and you want to save those for a better modding cause.

hold that phone
Between calls, sims hold their phone handset that they used to put back on base station every time. They hang/drop it as soon as their next interaction is not with the phone any more.
Cell phone interactions don't disappear on sims, if they are already talking, so we can queue up next call. Sims still put cells back in their pockets, but it's real quick. And again, fixing this requires overriding too much stuff for my taste - cell phone interactions are matryoshkas with each one checking the pocket for cell phone or playing animation.

Additional Credits:
The Sims 2 Ultimate Collection SimPE Photoshop
gummilutt for testing in non-UC environment
Posters in the Hacks & CC that you'd like to see thread, particularly SneakyWingPhoenix for the newspaper idea