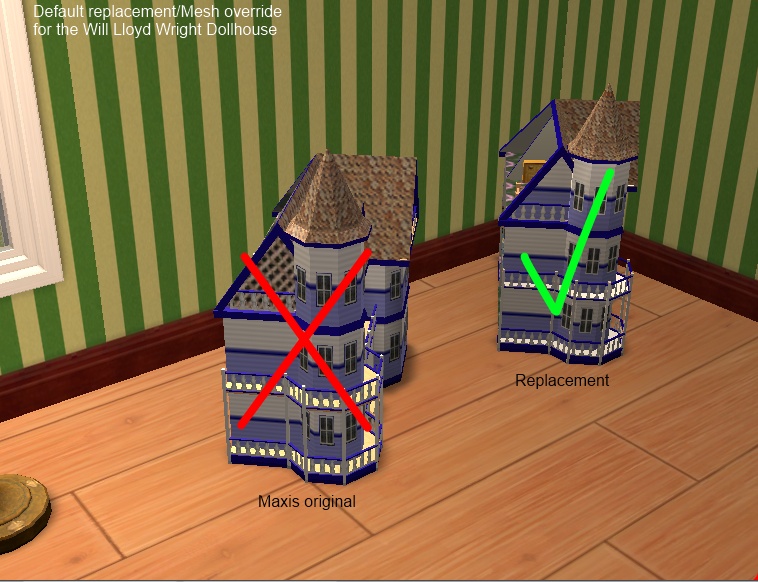 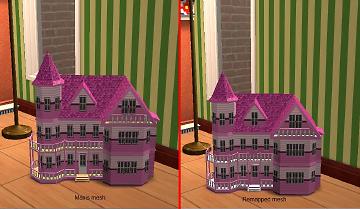 67 Thanks  Thanks     11 Favourited
I've been using Michelle's remapped version of SnowStorm's recolorable version of the Will Lloyd Wright dollhouse for a while, and pretty much ignoring the Maxis original. Recently, gdayars uploaded a CEP Extra which makes the Maxis dollhouse recolorable. After looking at this, and realizing that SnowStorm's dollhouse is an exact clone of the Maxis one, except for being recolorable, I decided to try turning Michelle's remapped mesh into an override for the Maxis mesh. It worked, and Michelle gave me permission to upload it, so here it is.

In addition to remapping the dollhouse, Michelle cleaned up the texture and tweaked the TXMT, so the override package replaces the Maxis texture and TXMT as well as the dollhouse's three GMDCs. Since gdayars' CEP Extra only replaces the Maxis GMNDs, the two do not conflict. However, the remapping will affect some elements of the way most recolors appear. You can see the differences between the Maxis dollhouse and Michelle's remapped and cleaned up version at the original thread for the standalone remapped dollhouse. However one difference that isn't detailed there is that the remapping matches the door to the columns, and shifts the mapping for the steps and decking to the part of the texture formerly used by the door. For an example of the effect this can have, click the button to see gdayars' pink recolor on the Maxis mesh (left) and the remapped mesh (right). 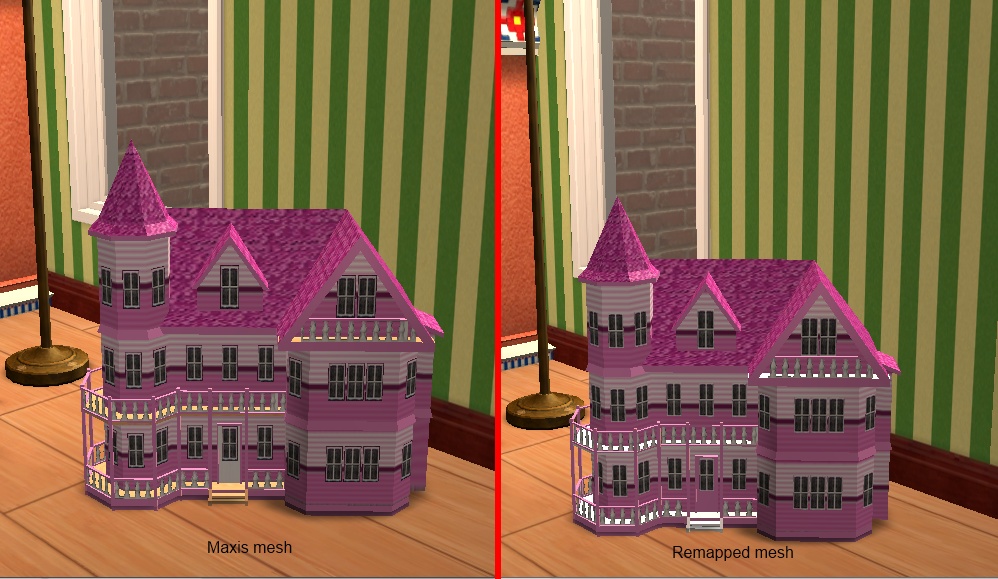 Note: This only affects the UV mapping and default appearance of the Maxis dollhouse. To make the dollhouse recolorable, you will need gdayars' CEP extra. SnowStorm's recolorable dollhouse is a standalone object with its own GUID. If you have it, or Michelle's remapping of it, you not only can keep it, you will need to keep it in order to use recolors made for it. Doll replacements are not affected by this, since the doll accessory is a separate object with its own mesh, texture, and GUID. If you have a replacement texture for the dollhouse, you can keep it, but you will need to make sure that it loads after the override package, and it may look different due to the remapping and Michelle's TXMT tweak.

Additional Credits:
Maxis, for the original object.
SnowStorm, for originally making it recolorable.
Michelle, for making it better.