No more snow hats and snow hats with muffs! Hide the fugly project 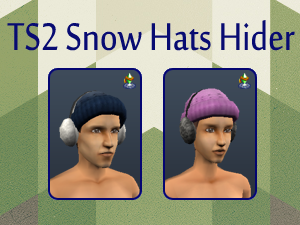 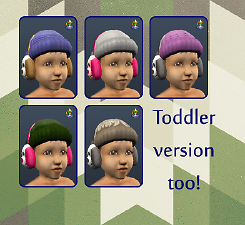 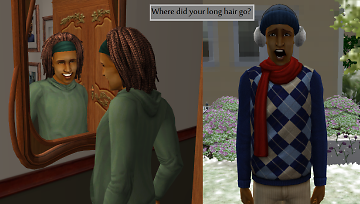 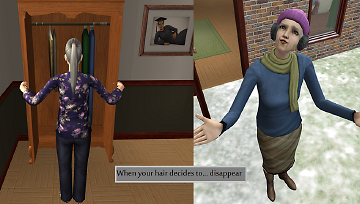 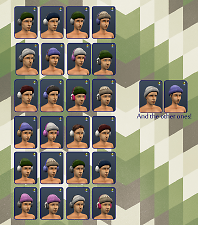 46 Thanks  Thanks     6 Favourited
Finally done!
Hello everyone. I'm sorry I hadn't post in a while. I've made another mod. This time, is a hider for ALL the snow hats and snow hats with muffs that came in The Sims 2 Seasons.

Why? Well, there's a tons of reasons. As @Dagi_is_a_punk mentioned in my last post, I don't need this insane amount of snow hats to clog my hair catalog. Trust me, I have live in a snowy city all my life and I have never been that cold to use a snow hat with muffs at the same time! Not even when I'm skiing! But also, what it bugged me the most is that many of my long haired Sims wouldn't wear them because, well... their hair would dissapear the exact minute they put the hats on? They aren't very useful. Also, there's a lot of other hats in the game. I rather live without these.

Now, read carefully to get the exact hiders you want.

Why this toddler exception? While I was hiding the hats with muffs, I got the feeling that maybe toddlers would freeze in the snow if they didn't have anything to cover their little ears. Of course, teorically, toddlers shouldn't even be allowed to go out if it's freezing outside, but it's up to you if you wanna hide the hats with muffs for them or not.

Conflict mods
This mod will conflict with any other hider mod for these hats. You can't have both. If you have default replacements for these hats, clearly you don't need to download the hider because your new hairstyles won't show up!
Any Sim wearing one of these snow hats will switch to a random hair.
These are the files that my mod hides:

The final picture is just illustrative! Of course I'm dumb and I forgot to put all the hairs there oops!

Next one is probably the hairs Barrete and Gibs with the muffs. I didn't touch them because they don't bug me that much. Also, a Hider for the female hair in Kitchen and Bath is already done!
See you next time.